Sequel to The Pyre Starter

Dakota Crossley has a job to do -- he kills other magic users who pose a threat to society. Along the way he must balance being a father, having a wonderful love life, and dealing with the dwindling network of in-the-know people surrounding him.

He’s so busy, he doesn’t consider the consequences of his actions. A man with a vendetta and a secret mission puts Dakota in his sights, and everyone near him could suffer for his mistakes

Will he be able to protect the people in his life, or will it all come crumbling down around him? 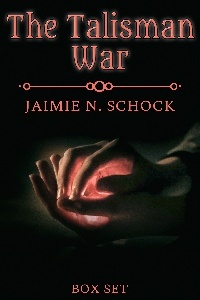 There would be witnesses. Other mechanics, customers, and passersby. But with sunglasses, hats, and a stolen license plate, investigators would have little to go on. Dakota didn’t hesitate. He produced his gun, and quickly pressed it against the mechanic’s neck, pointed upward.

But it wasn’t fast enough. The mark kicked him in the leg and swatted the gun away, and before Dakota knew it, he got out a command to a talisman they didn’t even know he had. “A’kund eta ma.”

Dakota would have shot him to shut it off, if not for the immediate problem of what it was. Bees. Killer bees and other insects, forced into an aggressive state and meant to descend on Dakota. He was immune. No magic-induced stings or bites would touch his skin. But Gage was not protected by his talisman, and if Dakota killed the wielder, the insects would still pose a threat simply by being here. One that even his powerful necklace would not defend against.

He reeled around and sprinted toward Gage. With seconds to spare, he touched his arm and extended the protection to both of them.

It surprised their foe. It always did. An all-defense necklace was unheard of, and not only because he and Adelaide and the rest went to great lengths to hide its existence. It simply never occurred to most wielders that such a thing would exist. Or perhaps they hoped it didn’t, since the person using it would be safe from whatever horrors and attacks they could concoct with their own crystals.

As bees buzzed angrily around them, Gage’s face contorted in fear. He knew he was safe so long as Dakota kept a hold on him, but the proximity of the stinging threats -- some, mere inches from his nose -- still terrified him. “I’m allergic,” he whispered.

Dakota simply nodded. He didn’t know that, but it wouldn’t have mattered. Enough stings from these bumble bees on steroids, and anyone could die. They killed people all the time. And that was without any magical guidance. He would just have to be a bit more careful that none of the creatures got to Gage.

With another evocation, the ground began to shake beneath their feet. Up and down like a real earthquake. A big one. The two fell to a crouching position, but Dakota did not loosen his grasp. Gage’s life depended on it.

What, for the two, were just hints at shadows amongst the swarms of bees and other unidentifiable insects, were imaginary wild creatures made of darkness to anyone else. Magic-induced hallucinations. Visages of monsters that attacked and tore at their target, that frightened and distracted him, and that misdirected the bees toward false locations in an attempt to ward off or damage what wasn’t even there.

Gage watched with wonder as the flow of stinging insects changed from a funnel around them to seemingly random destinations and chaotic patterns. He let out an audible breath.

With his eyes locked on their target, Dakota walked Gage over to the office and, careful not to let any bees inside, pushed him in and closed the door. There was surprisingly no one there, which meant that if anyone had hoped to hide here from the bees, they hadn’t made it. Though having no witnesses would certainly be a good thing, in the end, the hope was to spare as many innocent people as possible. “Stay here!” he instructed.

Gage looked at him helplessly from the other side of glass in the door. He mouthed the words “I’m sorry,” but Dakota couldn’t hear it over the noise of buzzing and some screaming and crying in the distance.

It wasn’t his fault. No one could have predicted that their enemy would call bugs or that he would use the one type that could easily kill Gage. Taking him out of the game temporarily would just ensure his safety and allow Dakota to get the job done.

He strode through the swarm and trembling asphalt.

With his gun pointed forward, Dakota found the grown adult, capable of powerful and dangerous things, cowering on the ground, covering his head, and whimpering. How many times had he reduced his targets to this? Incapacitated, but not dealt with? This was perhaps the gray area Gage talked about. He could just take the talismans and walk away. But if this guy knew how to get these three, some of the strongest out there, then he’d be able to find more, and Dakota couldn’t risk that. He already had enough enemies, potential and fully realized. Like hell did he need one more.