Special Border Patrol agent Alex, who can shape shift into a raven, is used to working alone. He honors his Scots ancestry and has never met another shifter except for kinfolk back in Scotland. When he’s required to accept a partner, he normally manages to get rid of them quickly by being so distant, remote, and downright weird they cannot deal with him. But the latest one, Native American Manuel, poses a whole new range of challenges.

Manuel Ortiz is a member of the Tohono O’Odham tribe who works for the Border Patrol to support his ailing elderly parents. He has a secret he’s never dared to dare to share: he can shape shift into a Red Tailed Hawk. When his superiors team him with cold, cynical Alex, he’s not sure why until he learns Alex has a similar curse -- or gift.

Together they begin to form an uneasy bond. Confronting an evil and completely alien drug cartel boss, they have to cooperate to survive and in doing so learn the synergy of partnership. They discover flying together can open a whole new world for them both and riding on the wings of love can be magical indeed.

Alex came awake with a start. He’d tried to turn over and fetched up against the solid bulk of another body, close behind him. Too close. What the fuck?

The room felt chilly. He must have forgotten to shut off the air conditioning unit. Damned thing seemed to have only two settings -- blasting out an arctic gale or dead off. He lay perfectly still for a few seconds while his mind skittered over the last twenty-four hours to sort things out. Okay, it had to be Manuel behind him. Anybody else would have killed him already or awakened him, tired though he had been. The slant of the light through the dirty mini-blinds told him late afternoon had arrived. He’d probably slept long enough.

With surreptitious care, he slid toward the edge of the bed, then slowly rolled over to face the other man. Yeah, it was Manuel. He must be cold because he edged closer as Alex turned to face him. Relaxed in sleep he looked young, but up close Alex could see the beginning of squint lines and the early traces of weathering on the other man’s tawny skin. His long, inky lashes fanned out, almost touching the high cheekbones. The Indian had a strong blade of a nose above lips a shade darker than his skin, lips that curved now in a half-smile as if he dreamed something pleasant.

Without thinking about it, Alex found himself stretching to touch those lips with his own. An instant before skin met skin, Manuel’s eyelids flew open. He mumbled a startled exclamation, words Alex could not understand. He guessed they must be in the native Tohono tongue.

For several seconds they looked at each other, so close Alex could count every lash fencing Manuel’s expressive eyes, smell the faint lingering trace of some aftershave or hair gel the other man used, and feel the warm breeze of his breath.

Manuel did not pull away or draw back. Instead, he returned Alex’s steady gaze and, after a moment, his lips again curved into a slight smile.

“Go ahead,” he said. “I think I know what you were about to do. I ain’t Sleeping Beauty, but if you want to, go for it.”

“You sure about that? Will you take a swing at me afterward?” Alex fought the answering smile tugging at his own lips.

Alex did. Despite being mainly a loner, he’d been in and out of a number of temporary relationships over the years, always with other men. He had no doubts or misgivings about his own sexuality. Although he wasn’t sure what Manuel’s leanings or experiences were, maybe it was time to find out. He moved the last few centimeters until his mouth closed with the other man’s. As he made that contact, an electric jolt surged through his nerves.

He lifted his right arm, reached across, and dug his fingers into the thick hair at Manuel’s nape, curving his hand to the shape of the other man’s skull. This kiss was not going to end until they had both explored its every nuance. Feeling the solid wall of teeth beneath the yielding flesh, Alex ran his tongue along the seam of Manuel’s lips.

After a moment, the younger man opened his mouth. If he hadn’t done this before, he caught on fast. Their tongues dueled as they teased back and forth with licks and nips. Before they drew apart, Alex’s cock was harder than an oak Billy club and, as nearly as he could tell, Manuel’s was, too. They both breathed hard and fast, blood pounding through their bodies with accelerating heartbeats.

“I ain’t the prince, either, but that was still extraordinary.” Alex gave his head a quick shake, trying to clear away the lingering dizziness.

“So where do we go next?” Manuel asked. 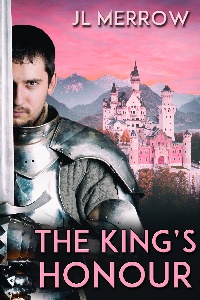