Dyo Hollingsworth’s grandmother Olympia is pushy and likes to meddle, especially in Dyo’s dating life. She really gets bad every year at their Samhain dinner when she tries to fix him up with man after man, or channels deceased ancestors who want to nag Dyo about his marital status.

When Dyo meets Steven, the chauffeur who is supposed to drive him to the airport, Dyo not only finds himself instantly attracted to Steven, but may also just find a chance to surprise his grandmother by bringing his own date to Samhain. 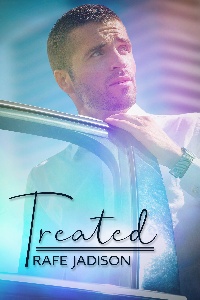 “Really?” Dyo asked. “I mean, what’s so interesting about me?”

“Your name for one. Is Dyo short for something.”

“Exactly,” Dyo said. “My grandmother has a thing for Greek gods. She named all of her children after them. My dad is Apollo, and his twin sister is named Athena.”

“Those aren’t so bad,” Steven said.

“No, but my Aunt Aphrodite and my Uncle Mercury said they got picked on endlessly in school. We’re not even Greek. My grandmother loves the Greek gods though. It’s kind of a religious thing. We’re pagan. It’s kind of like Wiccan, if that makes sense. Most pagans like the Celtic or Norse gods. My family is into the Greeks.”

“Let me explain,” Dyo answered. “Pagan is like the broader term, and Wiccan is more specific. Kind of like Christian and Methodist.”

“Sorry, it’s just that most guys don’t get it,” Dyo said.

“You have to explain this to a lot of guys?” Steven asked.

“That’s strange,” Steven said. “I would think a lot of men would want to date you.”

“Well, I hardly meet anyone, and when I do, the whole pagan thing is a bit of deal breaker for some guys. Wait, you think a lot of guys would want to date me?”

“Of course,” Steven explained. “You’re handsome. You’re nice. You’re seem to like your job. You care about your family. Hell, you were cute with your grandmother on the phone. I mean, I would date you.”

“No, I kind of like it,” Steven said. “Of course a guy like you would probably never want to date me.”

“Why? Are you married or something?”

“No, I’m definitely not married. Like you, I can’t seem to find anyone really interested in me. I was referring to the whole chauffeur thing. I don’t think a guy like you would ever date a chauffeur.”

“Well, then that’s because you don’t know me yet. I would totally date a chauffeur, especially you. Hell, you look really hot in that uniform. And your hand. It was warm, and big, and ... Sorry. I’m rambling.”

Dyo could see Steven big smile in the rear-view mirror.

“I haven’t done it long. I don’t even have good job security,” Steven said. “Today is actually my first day.”

“Well, I don’t usually choose guys because of their jobs,” Dyo said. “If it makes you feel better, my ex-fiancé is a door-to-door vacuum cleaner salesman.”

“No, I wouldn’t have cared,” Dyo said. “He left me at the altar. I think my grandmother hexed him after that. Wait, does that freak you out?”

“Eh, not so much,” Steven said. “Grandmothers have the right to be protective, and anyway, I can’t picture myself ever leaving you at the altar. We are coming up to the airport though. Where would you like me to let you off?”

Dyo inhaled. Yes, he was going to do this.

“Absolutely,” Steven replied, his eyes glinting in the rear-view mirror.

“Well, my grandmother bought an extra ticket for me to bring a date this weekend. I have always wanted to surprise her with someone. I know this sounds crazy, and we just met. It’s just that ...”