Bound by Blood and Fire

One quick drink at a vamp bar to humor his partner's sister and then back to the hotel. Sounded harmless enough, but the most innocent events sometimes have a way of going awry for Zoran and tonight would be no exception. Things go horribly wrong and somehow he finds himself eternally bound to a handsome Dominant vampyre. What's wrong with that? Nothing, except Zoran is a demon with a taste for vamps. How will he get out of this one or does he even want to? 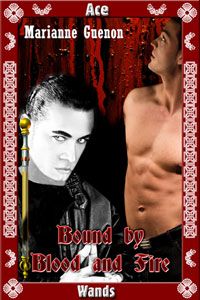 Bound by Blood and Fire

Finally alone with Zoran, Reese took this opportunity to get a closer look. It didn't seem possible this striking man turned into an actual demon. Granted, even in that form, he still was rather impressive with his purple and black swirled skin tone, black leathery wings and slender, silver horns that arched low over his head. His lustrous onyx black hair, long and loose from the fight, didn't change for either form and he was glad for that.

Slowly pulling off the blanket covering him, Reese wanted to see how much damage, if any, he sustained during their fight. Scanning over the nude body, he noticed there were a few bruises remaining, but the only wound he could find was the burn mark left by his ring on Zoran's chest. After healing, it would leave a distinct image of his bloodhouse crest branded into his skin. For some reason, it pleased him greatly to see his mark there, a visible sign to all this man now belonged to him.

Harboring a demon would have its complications, without even thinking of the obvious one of keeping a predator to his people in his house. If word spread to the other bloodhouses, especially to a leader of their rival house, Garrin, there would be a call for an Imperial Tribunal to formally disband the bloodhouse, citing treason for harboring a deadly enemy. What Garrin would not give to see him humiliated and broken before the entire Tribunal, his people scattered, forced to go rogue. Caution and careful planning would be wise until the right time presented itself to gain an audience with Empress Irina and garner her support. Until then, he could think of many very pleasurable ways to keep his demon busy and out of trouble.

No longer able to resist the urge, Reese leaned over the sofa and kissed those perfect lips he had been admiring since he first saw him in the monitor. He sensed movement and felt a hand gently wrap around his neck at the same time as there was a passionate response to the kiss on his own lips. The need for more began building and almost of its own volition, his tongue demanded entry, which was heartily given. Exploring each other, their tongues dueled, vying for control until he broke the connection and found himself staring straight into deep blue eyes with his own steely gray ones.

Those blue eyes narrowed ever so slightly, their color deepening as Zoran finally spoke. "I see you are not wasting any time letting your intentions be known. How did you know I would reciprocate and not bite those luscious lips right off your good-looking face?"

He needed to establish his dominance over this one immediately, instinctively knowing this would not be an easy task, but one he eagerly looked forward to.

"I am pleased to know you find me attractive, my pet. However, I will only say this to you once. I own you now, demon spawn, and I will treat you fairly, but if you ever threaten me again, I will make you wish I ended your life instead of graciously sparing it."

Just to prove his point, with fangs fully exposed, Reese once again kissed him, with far more ferocity this time. He let the full weight of his body push him into the sofa as his tongue demanded Zoran's submission. He was only getting indifferent acquiescence from the stubborn male underneath him. He pulled back, lingering just long enough to nip Zoran's lower lip with his fangs and then slowly lick the tiny drops of blood appearing there. Chills of desire flowed through him. He could get easily hooked on this unique tangy liquid that seemed to energize him more than human blood ever had.

"Our first kiss gave you away, but I see you are not entirely ready to admit your willingness to submit and that is acceptable to me, for now. I have not had a challenge in a very long time, my pet. Bending you to my will and getting you to realize that is what you desire as well will be a task I wholeheartedly accept."

"I am demon bound to you now, vamp, and as such I will endeavor do whatever you ask of me, but know this, I will never truly submit to you. You will be dust before that ever happens."

Rescue Me
Scarlet Blackwell
In Shelf
$5.99
Tweets by
sirenbookstrand