Christmas with a Demon

Jiraiya had no desire to be a part of the Christmas season. He planned to do his job and protect his people from the monsters that lived across the border. The last thing that he expected was to have a monster fly into his arms or the feelings that would come with it. Now, Jiraiya must decide if the monster that declares a soul binding connection to him is a Christmas miracle or a disaster. Does love stand a chance for two enemies even around this magical time of the year?

Christmas with a Demon

That was the one constant thing that was said to the villagers and said by the villagers. It was said by the adults, the children, and even the toddlers. Everyone was aware that the forest that surrounded their village was forbidden, that behind the trees hid monsters that would kill them all if given even half the chance. Monsters that were the nightmares of the children, the challenge for the teenagers, and the caution for the adults. It was said that as long as no one crossed the line on either side, the two groups would live in a special kind of peace.

But never let the guard fall. For who could truly trust a monster?

At the age of eighteen, the men would join the post to watch over the line. There was a guard station, at the tree line, with someone constantly watching, waiting, and praying. In the last lifetime, only three monsters have crossed the line. The first two were shot and killed.

The third was standing at the thirteenth post, staring at me with blood running down his face from a head wound―on Christmas Eve night.

I was staring at that monster, even as snow fluttered in from the outside through the open door. Snow had covered the monster’s hair and body, making every movement from the man seem rigid and frozen.

My hands were gripping him, holding him up, and keeping him from collapsing. A part of me was yelling to finish the job that had been started. But there was the larger part of me that took after my mother.

I slowly lowered him to the wooden floor. With a quick glance around, I was relieved that the thirteenth post was built high in the trees. There were no other posts for a mile, and with it being the middle of the night it would have made the limited view of the trees even worse.

“You need to hold still.” I was surprised that my voice sounded so confident. The monster did a small head nod, only to groan in pain from the movement. I grabbed my water bottle and the first aid kit without a second thought. I poured some water onto his head. The monster’s dark hair made it difficult to see if it helped much. I tried to move his hair out the way cautiously, being careful to avoid the injury, but must have failed if the hiss of pain told me anything.

The monster remained still, but I could see his fist turning white from the grip on his knee. I returned to looking for the injury. Then I found it―a long gash on the side of his head. It did not appear to be deep, though. Just to be safe, I bandaged his head. I was unsure what health differences this monster had from us.

As I treated his wounds, I couldn’t help but think about how this was not how I expected to be spending Christmas Eve. I was not supposed to have this shift but had been called in last minute when one of the higher-ups wanted to spend time with his family. The younger members of the post were often called in on a moment’s notice and I seemed to have the bad luck of always being called first.

Looking over at the monster, I wondered if it was good luck, instead.

I could not think of a single person in the village that would have done what I was doing. I barely understood what I was doing. The idea of a Christmas miracle came to mind. It was the season of goodwill and peace on earth. I tried to not let my face reflect my annoyance with the cheesiness of the idea.

“Thank you.” The monster’s voice had a snake-like hiss at the end. That was when I noticed that, hidden under the long strands of coal-black hair covered in snow, a pair of green eyes with slit pupils like that of a snake stared back at me. My first thought was to get away from this creature as soon as possible. I would not say it was fear, more like a survival instinct, but I remained still.

“Don’t mention it.” I meant that in more than one way. I did not want to be seen as a traitor to my family or neighbors. The idea of a holiday season and a moment of compassion could be my death. But my hands still wiped away the blood that was starting to dry on his face.

The monster stood up quickly, and I had to rush forward to catch him, as his legs could not hold his weight. He was taller than I was but had less body mass. I couldn’t help but appreciate this fact. It gave me some comfort as I was able to set him back down on the ground with ease. As the monster panted, I found myself pulling out a water bottle and an apple from my satchel. When I held it out to the monster, I was not sure who was more surprised by the action.

“It won’t hurt you.” I tried to make my voice hold some kind of anger or venom toward the other being. But it lacked any negative features.

Perhaps that was why the monster took both from me and bit into the apple without a word.

I noticed the monster did not seem to have fangs or inhuman teeth as he ate. Besides the slit pupils, there were no visible differences between it and myself. Of course, there was the fact that a human-sized cottonmouth had slid onto this post and transformed into this human-like form, had proven what this monster was.

A Love Story at the Top of the World
Scarlet Blackwell
In Shelf
$4.99 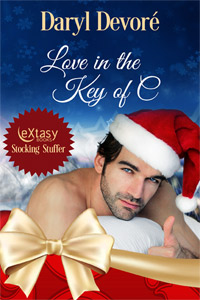 Tied Up In Tinsel
Lark Westerly
In Shelf
$1.99