Heat Rating: Sextreme
Word Count: 34,482
2 Ratings (4.0)
Contemporary Menage a Trois/Quatre Paranormal Shape-shifter
[Siren Menage Everlasting: Erotic Contemporary Menage a Quatre Paranormal Romance, shape-shifter, M/F/M/M, HEA]
After seeing a lion change into a woman at last year’s Shifter Days Festival, Bree Chambers is ready to prove that shifters are real. Still, she never expects to run straight into three gorgeous shifters. When she can’t get them to admit what they are, she snags an invitation to stay in their bunkhouse.
When werelion brothers Matt and Ridge Dayton and their cousin Burton Bridgeport notice the beautiful brunette, they know they’re lost. They’d love to show her their claws, but they have to hold back until they’re sure she’s the one.
When their not-so-friendly neighbor, Ron, decides to give Bree a touch of The Allure, the mystical werelion breath that draws mates together, the men have to up their game if they plan on capturing their mate.
But are the men too late? Has she already succumbed to Ron’s allure, putting her out of their reach? Or must they take extra, even supernatural measures to get her back?
Note: This book contains double penetration.
A Siren Erotic Romance
Jane Jamison is a Siren-exclusive author. 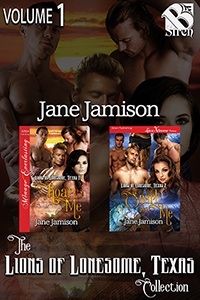 “Sit with us,” ordered the one with wavy dark hair.

The hungry glint in his eye was enough to make Bree believe in both a Heaven and a Hell. His dark, wavy hair framed his masculine face. High cheekbones combined with a square chin to give him a Native American look. He retook his seat, allowing his long body to slink along the chair, as he propped one knee on top of the other. The faded jeans and denim shirt he wore looked comfortable yet, somehow, sexier than any exotic male revue dancer’s costume.

“Are you okay, puttin’?” asked the blond as he sat down. His dark blue eyes, eyes that seemed to dive straight into her and search her soul, brightened.

Wait. Is that amber in his eyes?

She remembered when she’d last seen eyes that color. The lioness had had the same amber in her eyes.

He’s definitely one. He has to be.

She silently shook herself and remembered why she’d come over to their table. “I’m fine, thanks.”

“Good to know.” The other dark-haired man grabbed the one empty chair at the table and pulled it out for her. “How about joining us?”

His asking her to sit down was a good thing. If he hadn’t, her weakened knees might have given out on her. She sat, crossed her legs, then uncrossed them, only to cross them again.

Calm down. This is why you came here.

“Carol told us your name. At least, your first name. She said she told you ours, too. Or have you already forgotten them?”

“You’re Matt Dayton.” Her gaze jumped from one man to the other. “And you’re Carol’s other brother, Ridge.” The blond had the sexiest smile she’d ever seen. “And you’re their cousin, Burton, right? I’m Bree Chambers.”

“Good to meet you, Bree. And we’re real glad you remembered our names,” answered Burton. His gaze slid past her. “Where’s your friend?”

So Carol had told them about Winnie, too. For the briefest of moments, jealousy took hold. But it was Winnie he spoke of. Her friend she’d give her life for. “She’s holding our table.”

Funny, he didn’t seem very interested in Winnie. Even stranger was her relief that he didn’t. The other two men had only glanced in Winnie’s direction but hadn’t made a move to go to her.

Ridge took a swig of his beer then refilled his glass from the pitcher. “Let me get you a glass.” He started to beckon to one of the waitresses then stopped when she shook her head.

Matt sat forward, his hands on his knees. “Is that right? You came to a bar but didn’t plan on drinking? Huh. You really are special, aren’t you?”

Special? Her? A shiver of delight coursed through her.

His dark gaze fixed on her. “So if you didn’t plan on partying, then why did you come here, baby?”

Puddin’ and now baby. She usually didn’t like being called pet names, but these pet names sounded sensual coming from their lips.

She drew in a breath. It was now or never. “I came to find a shifter.” She waited for their reactions, but they remained silent, non-committal. She skipped her gaze from one man to the next. “Maybe even three.”

“So you believe shifters are real?”

She swallowed and suddenly wished Winnie was by her side. Not that Winnie was positive that shifters actually existed. She supported Bree, but it was easy enough to see that Winnie wasn’t a hundred percent in agreement. Still, that was what best friends did, right? Support the other even when they didn’t agree?

She swallowed then spit out the truth. “I do.”

He was wearing the same kind of outfit that his brother and his cousin wore. All three men were broad through the shoulders with arms strong enough for her to see the ripples of their muscles whenever they moved. Their lean waists beckoned to her, guiding her gaze to their crotches before she realized what she’d done and looked away. Each wore a simple black belt with a plain silver buckle. Boots that had long since seen better days completed their look. These were the type of men once sported in tobacco ads. They were still the men of many women’s, including hers, fantasies.

She could’ve lied. Probably should have. In fact, she could’ve said almost anything. Yet she stuck with the truth. “I know shifters are real because I saw a lion right here in this very bar last year. And I saw the lion change into a woman.”

They moved together, three men who knew each other as well as any three men could. Yet with each move, they grew to know her better. She did her best to reach every inch of their bodies, but it was impossible. She was cocooned by them, their hands and mouths, their touches and caresses transporting her to a different reality. It was as though she floated about them, able to see every move they made, yet still felt every single bit of sensation, every flavor of their bodies, every scent wafting over her.

They pummeled their cocks into her, driving hard enough to almost frighten her, yet given the chance, she would’ve begged for more. The sun warmed their union even more, and perspiration dotted their bodies.

Burton put his thumb to work to massage her clit and continued his pounding. He rammed into her, over and over, pushing her body to slip over the grass. If Matt and Ridge hadn’t held her in place, she would’ve kept scooting over the smooth surface.

“Shit. Too soon. But damn, she’s so fuckin’ tight!” Burton stiffened, his fingers digging into her thighs. Suddenly stopping, he remained frozen, his cock trapped inside her pussy. Then, uttering a loud grow, he plunged into her again. He broke apart, his body shuddering as his climax ripped free. “God. Oh God.” Spasms racked him as he lost control. When he fell away, he was spent, his breathing labored.

She did as Matt ordered, her hand against his rock-solid leg. Sucking hard, then freeing his cock, she worked her head back and forth, her tongue over and over. He tasted sweet yet with an indefinable quality. Was that because he was a shifter? She cupped his balls, felt them tighten, and knew he wouldn’t last much longer. A second later, she was right.

Matt clutched a hunk of her hair, and pain seared into her head. Yet she didn’t complain. Instead, she tightened her mouth around him even more.

“Shit, yeah,” he whispered and was lost to his climax.

“Sweet, baby. Real sweet.” He pressed his palm to her cheek. “Fuckin’ sweet.”

She smiled, but the smile was lost in Ridge’s attack. He thrust again and again, ramming his cock deep inside her ass, past her protesting tight rings. A burst of air came from her with each of his rams. His fingers dug into her ass cheek as he kept her next to him.

The air was thick with their scents. Perspiration mixed together. The slapping sound of Ridge’s crotch against her butt cheeks filled the air. Her body throbbed, the result of their poundings.

She half expected Ridge to come inside her, but he pulled out then shot his warm seed onto the small of her back. She arched, welcoming the sweet stickiness against her skin. Collapsing next to her, Ridge squeezed her breast possessively.

Knowing it was a futile effort, but still needing to try, she sat up, wrapped her arms around her knees, and tried yet again. “So? Are you ready to admit you’re shifters?”

The men shot each other amused looks then laughed and got to their feet.

“Come on, baby. Let’s get you back to the ranch to get cleaned up.” Matt held out his hand to help her stand then handed her his shirt. “Here. Use this to do as much as you can right now.”

“I thought so,” she muttered.

She smiled and did her best to clean off. “Nothing.”

But just you wait. I’ll get you to talk sooner or later.

She looked up from wiping herself with Matt’s shirt to find him studying at her. “Yes?”

He opened his mouth to say something then glanced at Burton and Ridge. A silent understanding passed between them. “I have to.”

“You have to…what?” Hope filled her. “You have to tell me you’re shifters?”

“No.” He took her by the arms, the amber that had faded from his eyes coming back.

She held his shirt to her chest, half afraid to find out. “Then what?”

He cut off then leaned closer. His lips parted slightly, but she couldn’t keep her attention there. She brought her gaze back to his.

Suddenly, the world began to spin. Her heart did a quick take, beating twice in rapid succession. “Oh,” she whispered.

And then the sensation was gone.

She blinked and forced the strange cobwebs from her mind. “What did you have to do?”

He slid his thumb over her upper lip. “Never mind. Let’s get moving.”

When he turned her loose, she felt unsteady on her feet. Lost. Alone. As though a part of her had ceased to exist.

Yet, strangely, another part of her, one she hadn’t known was there, grew stronger. Something that hadn’t been inside her was there now, an instinct born of primal urges. An urge to take the men again rose inside her. Yet there was no time.

She smiled and watched as the men dressed. We’ll make time later. I swear we will.

Come in from the Cold (MM)
Tymber Dalton
In Shelf
$5.99
Tweets by
sirenbookstrand