Duke has wanted Holly for a long time but she was too young, too innocent, and he was married. Now, she’s older and he has waited long enough. She is going to be his.

Holly grew up in the MC life. Her father was once president of the Trojans MC before he handed the gavel over to Duke. She refuses to become part of the life like her mother has. Being an old lady is the last thing she wants to become.

He has bided his time and now he will not let her go. Holly is his to control, to fuck, to love. He’ll do everything in his power to claim his woman but what will happen when Holly finds out the truth about the club?

When his ex-wife tries to hurt her, Duke will have to make a choice. Can he kill the mother of his child or will he protect the woman who owns his heart?

In answer, Duke took possession of her lips, deepening the kiss. He stepped between her spread thighs, pressing his palm against her crotch. She gasped, pulling back from him. Had he gone too far? Duke didn’t care. He’d taken his time, given her a chance to be ready. If Pike knew what was going on inside his head, Holly had to be aware.

There was a knock on the door interrupting their moment. Duke had been about to talk to Holly, but instead he looked over his shoulder toward the sound. “What?” His cock was rock hard, pressing against his zipper.

“Sorry to bother you, Duke. Matthew is looking for you,” Pike said.

That was all it took for Holly to start pushing him away, getting firmer with each shove. “Get off me,” she said, whispering out the words through gritted teeth. Duke growled. He was annoyed at being interrupted. Stepping back, he watched her slide off the table glaring at him. She looked totally adorable when she was angry. “Go and find Matthew. This was a complete mistake.”

Banding an arm around her waist, he slid down to grip her ass hard. “Baby, the only mistake that happened right now is the fact I had to fucking stop.”

She pressed her palms against his chest to push him away. Duke was bigger and stronger than she was. “Keep trying, baby. You’re not going to be the one in control. I am.”

“Get your hands off me, Duke.”

He glared at her. “Don’t fucking think you can pretend you didn’t want me, Holly. Your nipples are rock hard, and I bet your pussy is soaking wet, begging for my cock.”

“No, I’m fucking honest. Tell me you’re not turned on.” When she went to open her mouth, he put his own on hers, silencing her. “You better be prepared to prove a dry cunt, Holly,” he said, breaking from the kiss.

She stayed silent as he waited for her to dispute his claim.

He took hold of her hand, pressing her palm against his cock. “This, Holly, it isn’t over. Don’t leave the clubhouse. We’re going to have a talk.” Duke took a step away from her, heading toward the door.

“Nothing is going on between us. One kiss means nothing.”

Spinning back around, he stalked toward her. In three easy strides he stood in front of her. He didn’t give her a chance to escape. Turning her in his arms so her back was to his front, he slid his hands inside the jeans she wore. He moved past the elastic of her jeans, sinking his fingers through her creamy slit. Duke groaned as she was bare to the touch. He’d not been expecting his woman to be completely bare, maybe a small patch of curls but not bare. “I’m going to be licking this beautiful little cunt, Holly.” He rubbed his finger around her slick clit before diving down to sink his fingers inside her sweet little pussy. “Fuck, baby, you’re wetter than even I imagined.” Duke groaned as he slid two fingers inside her with ease. She cried out, thrusting onto his fingers. “You can try and pretend all you want, Holly. I know the truth, and this is not the end.” 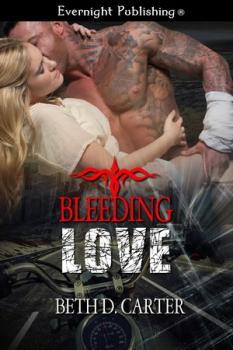