Stuck closing her chocolate boutique on a lonely Friday evening, Tish Richmond can think of a hundred other things she'd rather do than go to bed alone. When boyfriend Vinnie comes to her rescue, she's surprised with something sweet...and spicy.

Daringly Decadent continues the story of Tish and Vinnie, first introduced in Daringly Delicious, part of the award-winning Dareville series by Leigh Ellwood. 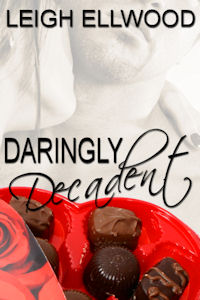 Tish Richmond had just bent her head down over the day’s receipts when the door chimed to announce a new customer. She swiped a strand of long blonde hair out of her face and tucked it behind her ear. “I’ll be right with you,” she called out, and hoped her exhaustion didn’t sound too evident in her voice. After a full eight hours of working the counter and the kitchen, she was ready to close Tish’s Riches for the night and get off her feet.

Right into bed, too, she thought as her heart fluttered. If only she didn’t have to spend the coming downtime alone.

The newcomer said nothing, and Tish figured the would-be customer had decided to browse the far shelves, which she had just stocked with a variety of chocolate-covered novelties, all wrapped in colorful cellophane appropriate for the coming fall holidays. Since coming in this morning to work, she’d dipped potato chips, Oreo cookies, graham crackers, and thick pretzel rods in melted dark and milk mixtures. With the mad rush to buy early Halloween and autumn treats expected to happen next week, Tish felt confident that she’d prepared her inventory accordingly.

She sighed, thinking of how her proactive manner left her wanting to slip into a comfortable coma. If only her boyfriend Vinnie didn’t have to work the whole weekend and late tonight, they could have enjoyed this night together at least.

Ah, well. He’d have kept me up all night anyway, she decided. I’d be a hot mess at opening tomorrow.

With the paperwork done, Tish gathered everything into an accordion folder, her gaze still focused on the front counter. Hopefully this customer proved decisive in matters involving chocolate and would make a quick purchase with little fuss. “Just so you know,” she said, “we’ll be closing in about ten minutes. If there’s anything special I can help you with...”

That’s when she heard the unmistakable click of the front door’s lock. Tish’s heart expanded, then sank down to her toes. Everything Vinnie had told her about what to do in the event of a robbery faded immediately from her memory. Why would anybody lock her front door, unless he had reason to keep away witnesses?

Shit. Who robbed a chocolate boutique, much less one in Dareville? The town enjoyed such a low crime rate by virtue of everybody practically knowing each other. Tish imagined true criminals stayed away for fear of being remembered.

Don’t look up, she told herself. You look at a robber’s face, you can identify them later. All the more reason for him to shove you into the kitchen and shoot you. Tish grasped the counter for support and squeezed her eyes shut to conjure a happier image to take with her to the afterlife. Thankfully, she realized, she had taken most of the day’s till to the bank earlier that afternoon. At best, this guy would get away with a hundred bucks or so, but would that come at her eternal expense?

Tish’s hands shot up and she shrieked. “Take whatever you want, just don’t kill me,” she pleaded. “The safe is on a timed lock, but there’s cash in the register and—”

She recognized the voice now, and peered upward slowly to meet Vinnie’s dark eyes and concerned frown. Relief, mixed with embarrassment, washed over her as she relaxed and slumped down on the counter.

Vinnie Petrocelli pressed into the counter from the other side and held her face in his large, brown hands. “Sweetheart, what is with you?” he said. “How could you possibly think—”

“I wasn’t paying attention, I’m sorry. I know I should when I’m working alone,” Tish said, and sighed. She couldn’t believe her handsome New York Italian stood here with her. Vinnie’s hands scraped roughly against her skin—long days tinkering with his uncle’s fleet of limousines resulted in callused fingers and palms, but Tish longed for his touch nonetheless. He must have come straight from work, for he smelled of a heady combination of motor oil and that strong bay rum soap he kept at work—the only thing that got out the grime.

“I thought you had to work late,” she added. “I wasn’t expecting you at all.”

Vinnie smiled. “Uncle Dom had mercy on me tonight, but I agreed to come in early tomorrow to help him out. When he heard Bella wasn’t in today and you had to close alone…”

Tish nodded—Vinnie need not have said more. Dominic Petrocelli treated Vinnie like a son, and consequently looked out for Tish as well. “That’s sweet of him,” she said, then raised an eyebrow. “You don’t suppose, though, he sent you here to make sure I had his order?”

Vinnie shrugged and gave a sheepish grin. “He does have a lot of people taking him up on that weekend wine tour special,” he said. “Word gets out that Tish’s Riches is providing the chocolate treats for the ride…”

“Yeah, yeah. Come have a look so you can report that everything is status quo.” As Vinnie rounded the counter to join her, Tish bent down to the small refrigerator under the counter where she had placed the trays of assorted truffles created especially for Big Apple Limo’s wine tour package. Guests would enjoy their locally-made sparkling wine and chocolate during a limousine escort to and from Dare’s Destiny Vineyard, where the owner planned to host a grand buffet for their anniversary open house. Dom had already promised to drive her and her new assistant, Bella, along with their friend Kate Robeson and Bella’s girlfriend Carole, on the second day.

Much as Tish looked forward to Sunday, the only day she closed the shop, the idea of bending over to expose her rounded ass to Vinnie unnerved her. Yes, her boyfriend had seen much more of her, and often assured her that he loved her body, but Tish still suffered anxieties about her weight. That her life mainly revolved around chocolate should have heightened her anxiety, but in truth Tish worked with it so much that it didn’t appeal to her as something she wanted to eat all the time. With Bella recently hired to help with sales and some catering, Tish could count on the younger, slimmer girl for quality testing. Vinnie, of course, had a sweet tooth she trusted.

Right now, though, his teeth were the least of her concerns. She bent over to pull out a tray and something hard nudged her ample ass and rolled as though to poke through her jeans. Tish groaned. She loved Vinnie’s cock, especially its thickness and the way it felt sliding in and out of her. She looked forward to a more intimate inspection later tonight, but not in her shop. The wide front windows easily offered passersby a grand view of the store and the activity within.

She reached behind her to slap him away, and failed. “Vinnie,” she screeched. “Stop it.”

“No. Don’t want to.” Vinnie punctuated this declaration with a gentle thrust. “You were practically shaking earlier. I just want to help you relax.”

Apparently this meant getting her naked, right here in the store. Tish nearly dropped a tray of lavender truffles when Vinnie’s hand reached around her to undo her jeans.

She gasped, then recovered quickly enough to whisper hoarsely, “We are in a place of business!”

“Yeah, I figured that out myself. Didn’t need the GPS, either.”

“Don’t get cute. People are gonna see us!” Her skin heated, even when Vinnie pushed up the edges of her blouse and exposed her bared waist to the cool, temperature-controlled air. His hand snaked up her spine and came to rest on her back bra step. His fingers tapped against her as he picked at the hooks.

“Who’s gonna look? The chamber of commerce?” Vinnie asked. “Except for Mick’s, Main Street shuts down after six, and there’s nobody outside. Besides, if there were, you can’t be seen where we’re standing. We’re in the blind spot. Relax.”

Easier said than done. Tish still had a tray in hand, and she managed to get it shelved again without cracking any of the truffles. Vinnie guided her upward to bend her over the counter while easing her jeans down around her ankles. The thong went next, but not before Vinnie enjoyed a few seconds playing with the thin waistband and soaked G-string.

Tish flushed hot in her face. How could she not feel that way around him? Vinnie only had to walk through the door to set her juices flowing.

She didn’t turn to watch him, but a loud zipping noise confirmed he intended to strip as well, at least where it was necessary. “I thought you wanted to check the truffles,” she said, her voice quivering.

“No, you wanted to check the truffles. I want something sweeter. C’mere.”