Alize has hungered for Arrgeth for as long as she can remember and assumes it’s merely a question of time until the fiercely handsome warrior will claim her as his own. Constantly thwarted by his inaction, however, she takes matters into her own hands, only to be met with a brutal rejection that is like a stake through her heart.

Arrgeth believes that his feelings for Alize are inappropriate. She’s the sister-in-law of his commander and should be given to someone much better than him, for the sake of their race. He wants her badly, loves her madly, so in order to protect her, he must give her up… for both their sakes.

When Alize is kidnapped by rogue Demonbruens, Arrgeth thinks he might just lose his mind. The search is on! Meanwhile, Alize finds herself in a difficult situation, at the mercy of her captors, along with a group of other women who are also being held hostage. No wilting flower, she decides she must take fate into her own hands and devise a method of escape… before it’s too late. She must become the heroine in her own story and prove she is nobody’s pawn. 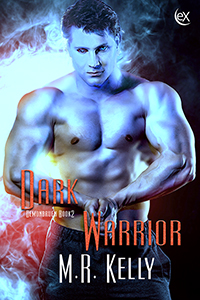 Alize stood from the altar, her vision blurry as she wiped wetness from her cheeks and turned, only to bump into something in her path. Extending her hand in front of her, she felt a cool, gentle breeze swirl the delicate fabric around her bared legs. She rotated slowly. Nothing was out of place in the empty chapel, so she moved down the aisle. What was that? From her peripheral vision, she caught a glimpse of a dark shadow on the candle-lit walls—but the shadow was not hers.

The long dark shape unfurled and stretched to meet the darkness in the corner beside her before materializing into a figure veiled in dark clothing. The form of a muscular male loomed in front of her. She recognized the man before he blew a gray smoky powder into her face. It was Greśe, one of the former High Commander’s minions.

Feeling a stinging sensation, as of ants crawling across her face and throat, Alize panicked. She raised her fingers to her skin and tried to wipe the powder away. Something is wrong! A thin layer of slime slithered up her neck and covered her face. Her heart raced in her chest, as she pulled at the thing, trying to get it off her face.

When she opened her mouth to scream, the thick substance slid down her throat. Breathing was becoming increasingly more challenging. As the bitter taste of the fluid solidified in her throat, tiny black spots appeared before her closed lids.

Alize fell forward. Her hands reached out to touch something, anything, in front of her. Whatever Traag’s henchman had blown in her face had solidified into a fine mesh mask that covered her from hairline to shoulder, leaving two small holes for her nostrils and a wider one for her mouth. The substance blocked her sight of everything but vague shadows. A faint scent of almonds crossed her awareness, before fading. Black spots before her eyes grew larger and a heaviness pervaded her legs, which slipped from under her as she collapsed into the powerful arms of her enemy. The roar in her ears muffled all sounds as Alize succumbed to the darkness. The last thing she heard was a voice she would never forget—that of the renegade Demonbruen, Traag. Her last thought was I’m totally fucked!

Alize’s brain tried to fight off the haziness produced by the drug as she attempted to clear her thoughts. Thinking was difficult, though. The heaviness had spread through her body. She began to realize she was hanging upside down over someone’s shoulder. The swaying of her upper body bumped against her abductor’s hard muscular back and caused her evening meal to rise and lodge in her throat as she gagged between breaths. Just when she thought she was going to vomit, the rush of cold air swept over her body raising the hair on her skin. The sensation was one she recognized. It was a portal opening... then she blacked out again.

The heaviness in her body eased as she was lifted from the alien’s shoulder as the drug’s effects began to subside. He released his grip on her leg, and she slumped, her head striking the cold, hard floor. She groaned and instinctively curled into a ball, then succumbed to the yawning darkness yet again.