More than two thousand years ago, the healer Lochlann Doran was the first Fae to leave the Realm after the Sundering of the Fae and human worlds. After centuries of wandering the human world, seeking his SoulShare, he has spent all his magick, and lost all his hope.

Garrett Templar is the star pole dancer at Purgatory, the hottest gay nightclub in Washington, D.C. If his past hadn’t taught him the futility of hope, his present surely would; HIV-positive since age 18, his illness has suddenly and inexplicably mutated into drug-impervious AIDS.

A SoulShare bond with Garrett may give Lochlann back his magick, his gift of healing. But it also might kill him. And if he survives the return of his magick, the Marfach and its host are waiting to use the dancer as bait in a deadly trap. Only an impossible love can save them both.

And everyone knows Fae don’t love…. 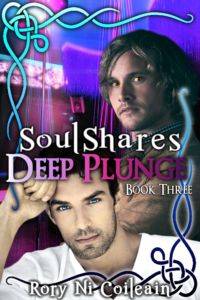 It was starting already, he could hear the exclamations, a few squeals, some of the regulars calling his name. The rush. He hit bottom, did a long slow sweep around the pole with legs extended as the bass beat kicked his ass, then swung his legs back in and shimmied up the pole. Hugged it, his mop of blond curls nearly brushing the ceiling. Worked it, all the way down, fucking the long gleaming hard length of it, slowly spinning to make sure every guy on the floor got the view he liked best.

Garrett had never been a gymnast, and though he’d studied dance off and on, it sure wasn’t anything like this. There were probably names for some of the things he did with his body, but he didn’t know what they were, and didn’t care. He made himself happy when he danced, and the fact he made others happy when he did it was just what his Grand’Mere Toinette had called lagniappe. A little something extra, thrown in for free.

A sharp prickle ran down the back of his neck as he hand-over-handed it back up to the driving beat. What the hell? He’d always been intuitive — he hated the word “sensitive,” it was the word his mother used to describe him because she couldn’t make herself say the word “gay”— ever since he could remember, he’d had an acute sixth sense. But why was it acting up now? Someone’s watching me?.