Destiny had wandered along the sun-dappled path in the woods many times, knowing it was special, somehow. So peaceful, so calm, so undisturbed… as though it had grown that way for centuries and was just waiting for the right person and the right time to reveal its mysteries.

Her dreams are haunted by a handsome man who she knows instinctively is connected to the path. When he suddenly steps out of her dreams and into her reclusive life, she is shocked to realize that he is from a past era where a man spanking a woman was a commonplace event.

Does she belong in the past with him, or he in the present with her? And who is behind the attempts to separate them and ruin their life together? 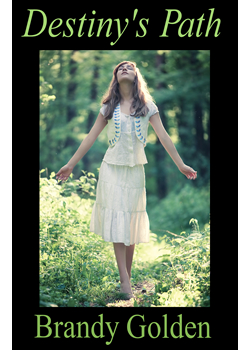 “Okay, Bessie, let’s see if we can relieve some of the pressure,” I muttered to myself. I sat the stool down at her side, figuring she would be desperate enough to stand still – I hoped. If not, we were going to have a problem.
Facing Bessie’s backside, I laid my cheek and shoulder against her side. Then I reached under her and grabbed a hold of two of the teats and pulled once, twice, and then several times over. Naturally, nothing happened.
I swore loudly, cursing being one of my talents, if you can call colorful language a talent. “Damned stupid excuse for a milk machine,” I snarled, lifting one hand to swipe the sweat off my forehead. I tried again and again, my language getting rougher with each failure. I was so involved in my attempts that I didn’t even see him until his voice rang out.
“That’s no language for a lady to be using; where on earth did you hear such things?”
My fingers froze on the abused teats, as the stern voice echoed in my ears. I knew before my head snapped up that it belonged to the man in my dreams, the one with the angry brown eyes. It was not comforting to look up and realize I was right!
I stood up so quickly that the stool went backwards, and the cow moved nervously to the side. “Who the hell are you, and where in blue blazes did you come from?”
I demanded the knowledge in a nervous voice laced with anger, as my body trembled with the impact of his unbelievable stare. I knew my return stare must have been just as unbelievable, as I drank in the sight of a man who was dressed like an old west rancher. He even carried a rifle and had a gun belt around his waist with a pistol in it.
My heart pitter-patted like something out of a romance book. I’d always thought that line was a little stupid, but now I understood the analogy.
My insides shook, as I surveyed the corded muscles of his bronzed neck and the immense expanse of shoulders beneath the white shirt and suede leather vest. His long legs were powerful in the snug denim and leather boots, but it was his face that I was drawn back to. He looked to be about twenty five to thirty, if I had to hazard a guess. The bones of his face were well honed, the skin darkly tanned, and the eyes were like the dark brown eddy of a river swollen out of control, with dangerous undercurrents. I saw the flash of strong white teeth encased in a square jaw line when next he spoke.
“The questions would be who are you, what are you doing to my cow, and why are you dressed like a man? Women don’t wear pants; it’s unbecoming to their station! Neither do they show off their bare arms with sleeveless blouses.”
Now, I was definitely confused. Not to mention a bit suspicious, skeptical and amazed at the possible meaning of this word.
“Station?”
A disbelieving brow shot up. He spoke a little slower, as if I was daft. “Place – your place?”
It was my turn to raise my eyebrow. “My place is wherever I choose it to be,” I replied loftily.
“Then it looks like your education has been lacking. You need to be taught better.”