He’s stunning, handsome, and muscular. But he’s not a man at all—he’s a god. Dion, also known as Dionysus Bacchus, once a deity in both ancient Greece and Rome, now owns a vineyard in the California wine country. He’s anything but romantic until he meets beautiful Chablis LeBlanc.

He’s the god of wine, theater, and debauchery. He's up for all of the above until Chablis does what no other mortal woman has when she steals his heart. She takes their relationship to new levels, beyond sex and into territory where Dion’s heart has never been. 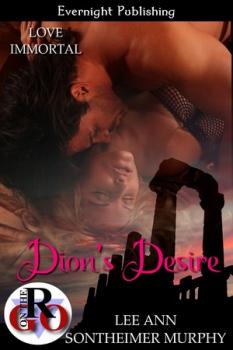 He lost his battle with temptation. Dion let his fingers comb through her hair, marveling at the silky texture. Some delicious fragrance rose from her, and he inhaled with pleasure. “You smell sweet,” he told her and glanced to see her reaction.

Chablis glared at him, eyes angry as a stormy sky. “What do you think you’re doing?” she said.

“I couldn’t resist,” he told her. “You’re a beautiful woman––so sexy, so alive.”

If he thought sweet talk would douse her outrage, he had been mistaken. “I’m a professional actor, contracted to do a job. Take your hands out of my hair and step back. If you don’t, I’m pulling the troupe from your event and we’re leaving.”

Dion resisted instruction of any kind. He never responded to ultimatums, but he could and did react to the savage passion radiating between them. She may be spitting fire like an alley cat, but I’ll tame her down with a kiss. He liked the challenge and did the opposite of what Chablis asked.

He tightened his fingers in her flowing hair and stepped closer. Before she could squeal in protest or retreat, Dion wrapped his lips around hers and kissed hard. He stifled her cry and intensified the pressure of his mouth. Chablis’ hands became claws and she raked at him. She swiped his left cheek with enough force to sting, but he ignored it. Instead, he ground his lips hard against hers and rammed his tongue into her mouth. She resisted for a few more moments, struggling against him and trying to push him away. Then something shifted. Her fingers uncurled and she rested her hands against him, one on the left shoulder, and the other flat on his chest. Chablis leaned into him instead of pulling back and her lips melted beneath his.

When she yielded, triumph swept through Dion, sweet as honey, as heady as wine. Behind it, a rush of passion thrilled him. No woman had affected him so much in more than a century. He slowed his heat and savored. The wind picked up enough to lift her long strands of hair and they blew across his arms, light as spider webs, and ticklish as lace.

In the moment, he forgot he lived as a mortal man and the old power he’d known since time began flowed through him. Dion shivered with the thrill and when he released her, he shut his eyes to pretend for a few more moments he remained in the old days, in Greece where it all began.

Chablis LeBlanc had intrigued him from the first moment. Now he wanted her and what Dionysus Bacchus wanted, he took.