It all begins when Conor Savage goes on a camping trip with his friend, Jake, and they begin talking about the demons in their lives. Although Conor is afraid of the dark, he learns Jake has a much bigger problem—the moon. Later, when his friend begins to act weird, Conor's fear of the dark is realized when Jake turns into a monster beneath the moon and attacks him.

At the next full moon, Conor learns that he has been captured by the sultry, sexy little demon called Devilet, Lady Luna's little sister who plays childish games of evil. When Conor finds himself under this little vamp's control, his personality changes. He becomes sexually hungry and goes after one of the men in his office.

This sets the stage for a dark, twisted tale of evil disguised as a bold, handsome, brazen man who lives under a curse called Vanity.

Kelly Conrad is a Siren-exclusive author.

The name repeated over and over in his mind as he lay looking up at the moon from his dark bedroom. His mind was in a mesmerized state, his gaze never leaving the soft, sensual disk in the sky that seemed to emit a tender, amorous light. He thought he was dreaming when he saw a strange-looking little wild woman come creeping down out of the sky on the silvered beam. She crept toward him so very slowly, her aura surrounding him like a captive caught in a net of lust.

She was a silvered creature with barely discernible features. Long white hair, blue eyes with tiny blue electrons flashing within them, and the filmy garment that covered her was of ragged beauty, thin and floating. It was so sheer she almost appeared to be naked. She moved like a seasoned dancer, her legs long and finely shaped. She watched him as she inched closer and closer, touching him and stroking him as if she’d found a new toy. Her erotic glow became a haunting pleasure that compelled him to lie upon his bed and writhe beneath her like a lover lost in passion. Even when he couldn’t see her, he could feel her dark caress. It was almost sexual. She stayed with him, stroking him with a heat that grew slowly between his legs. His hand began to move, reaching downward along his muscled body to find that his cock was hard and long.

She pressed close enough that he could almost feel her fingers brush his skin. The pale glow that emanated from her burned him, sparked something inside him. Something primal. It started a fever somewhere deep inside and spread like a slow-burning fire through his veins, poisoning his blood.

And then she spoke.

Her breath was soft, and sweet, and warm, and the words that came from this sensual creature taunted him, causing a burning desire to build in him as she put her lips close and spoke brazen, suggestive whispers in his ear. The lovely ache he felt in his bones as they began to stretch and move caused him to throw his head back while his teeth stretched to sharp, lethal points against his tongue. This creature of the moon was a tempting lover holding him captive, her singsong voice wrapping him in satin bonds, causing him to slip even further into the warm, soft, pillow-like comfort of her magic.

And then everything went dark.

The next thing he knew he stood cowering against his door. From somewhere far away he could still hear her voice as she whispered vile suggestions in his ears. He saw fleeting pictures of dark streets, high-pitched screaming, and a struggle, but never the act itself. Never the deep penetration of his teeth into someone’s neck, never the blood until it was all over, and he found himself racing away. Running! Running! Through the gray steam hissing from the city’s gutters, darting across a dark street, caught in the bright headlights of cars that skidded on their breaks and honked their horns at his bloody sight. Up one street, and down another, he continued to run until he slammed inside and stood there safe in his home, his den, his lair, his hutch.

Now, after she had had her way with him, he saw her spirit rise and depart from him and knew it was over. Curious, but afraid of what he would see, he crept to his mirror. When he looked into it, he saw a man so raw and primal that he reeked of sexuality. His hair was wild and curly as it framed his face. His eyes were green with gold specks and sparkled with evil. His lips were lush and full, and his teeth perfect. His clothes that hung from his back were soaked in blood, and blood dripped from his mouth. As he stood there staring, his memories tried to return, but the pictures whirling inside his head were confusing.

Later, he stood beneath a welcome shower to clean the telltale blood away and then languished in his bed for long minutes until he fell asleep, his mind emptied of everything except one thing.

As they wilted toward the pallets, their sensual gazes sinking deeply into each other, Adrian could sense something within Conor that excited him. Something deep and feral. Something strong. His heart beat a little faster, and his blood rushed through many tiny canals while he and Conor wiggled beneath the covers and met in a flurry of arms and legs. Just then Conor reached down and took hold of his cock while his mouth met Adrian’s, hungry and searching. In response, Adrian opened up to him, his tongue snaking into Conor’s mouth.

Conor kissed him back, his own tongue dueling with Adrian’s. His cock rose, getting harder and harder as it touched and pressed against Adrian’s.

Adrian could feel himself falling into the euphoria he had experienced the first time he’d made love with Conor. It was rich, hot, and whirling.

“Take me in your hand,” Conor whispered to Adrian.

Adrian immediately reached down and grabbed Conor’s erect cock, stroking it roughly up and down as they continued to kiss. His kisses were drugging, like some sweet, exotic ale waiting to be enjoyed.

Conor had been guarded, but now he delved deep into his uncivilized past and grabbed Adrian’s cock roughly, squeezing it until Adrian shuddered and winced under him. He had come to enjoy a kind of rough-and-tumble love, but it was only since this change in his life had come about that he felt that sex was a power struggle, the chance to vanquish a stronger man by appealing to his deepest needs.

He took the aggressor’s role as he gnawed on Adrian’s lower lip, inhaling his lover’s breath, which tasted sweet like expensive wine. Adrian reached up and pinched Conor’s left nipple, and Conor squirmed at the roughness but loved it. It made his dick even harder.

Each of them fondled the other as they kissed. It had only begun, but was quickly growing into a fast and furious kind of lovemaking, a way to release the sexual energy that accumulated in them both. Adrian began to whimper and squirm as his body tensed, and then he ejaculated into Conor’s hand.

He leaned into him close, whispering in his ear. “I want to fuck you, Adrian, not play house. I want to fuck you so hard I’ll feel your soul next to mine. I want your cock pushing against me, rubbing while I plunge in and out of you.”

Suddenly, his words had turned to growls just as Adrian had expected. Even so, Adrian felt a chill crawl down his back. He furtively drew back and looked at him. The desire in him, the passion, and the wild, uninhibited pleasure turned him into a wanton animal. Adrian felt an excitement he could hardly stand. Anyone else would have been frightened, but not him. He wanted the animal in Conor. He wanted to feel the lust pour out of him. He wanted Conor to carry him into the hell he’d just crawled out of.

Suddenly he felt Conor throw his inhibitions to the wind. His movements became wild. His moans and guttural words in his ears were an aphrodisiac. They were better than dirty. They were animalistic and wild. Adrian had never felt so turned on in his life. He embraced the man-animal and clung to him while he fucked him. Conor’s cock was much bigger than before, reaching deep into Adrian and stirring such sensations Adrian couldn’t believe what he was feeling. The two struggled on the pallet, their bodies moving up and down, in and out, rolling with each other, in search of that ultimate place of completion. And then he felt a scratch—and blood. His teeth! They were razor-sharp, and every time he kissed Adrian, his teeth left a scratch that oozed blood. Adrian could feel him lapping it up. His tongue was rough, and hot, and his body was hard and heavy. Adrian knew he was playing Russian roulette every time he made love with Conor, but he didn’t care. Normal fucks no longer excited him. He wanted more—he wanted to be electrified. 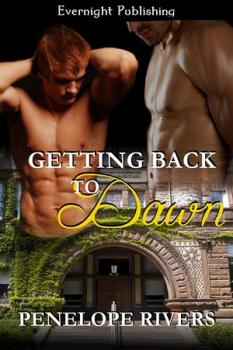 Getting Back to Dawn (MM)
Penelope Rivers
In Shelf
$3.99

The Lynx Who Purred for a Sidhe Prince (MM)
Scarlet Hyacinth
In Shelf
$2.50
Tweets by
sirenbookstrand