Rachael Crawford has lingering back pain after surviving a boating accident. All her life she’s dealt with problems by solving them with practical solutions. Why can’t a doctor eliminate her aches and pains so she can get back to running the family newspaper? Growing impatient with failed attempts at physical therapy, her doctor sends the best physical therapist in the state to help her.

Nick Browne is intelligent, professional, a credit above his fellow peers. He’s good at what he does and has helped many people with therapy needs—but then he meets Rachael and finds dealing with a Diva is not to his liking.

Nick’s instructions and Rachael’s objections to following them spark heated arguments between the two—arousing more than their tempers. From the massage table—to the bedroom—can Rachael and Nick find a compromise to their problem? Will Rachael be able to curb her impatience and work through Nick’s rigid schedule? Or will the pair merely resolve their frustrations between the sheets? 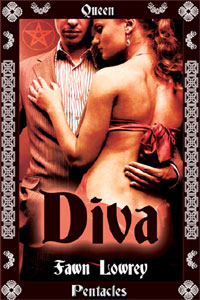 Nick lifted Rachael off the table and hurried from the therapy room. His mouth pressed against hers in a heated kiss that made her forget all about her sore muscles. When he stepped out into the hallway, he hesitated only for a moment before turning toward the back of the large house.

Rachael clung to his shoulders, her arms wrapped tightly around his neck and her mouth returning his heated kisses. He hurried along the hallway to the suite at the end of the space and kicked the door back on its hinges. He reached the bed in a few long strides and settled her back against the mattress. He pulled his mouth away, his chest heaving.

Rachael’s eyes fluttered open. Oh God! What just happened? She gulped in a breath of air as his hands came at her. He hooked his thumbs in the waistband of her spandex pants and pulled them along her hips. With a quick flourish, he yanked them free of her legs and tossed them to the floor. When he reached to grasp the hem of her top, she drew in a quick breath. Being naked from the waist down meant only one thing—they were going to have sex.

His hands touched her bare sides as he removed her top. Her breasts jiggled as he pulled it away and her long hair bounced across her shoulders, falling haphazardly across her face and obscuring her vision for a moment. She raised one hand and swept the mass aside just in time to see Nick shed his jeans and tee shirt.

A moment of realization dawned, making her keenly aware that if she was going to stop the action, she better do something. She bit her lip and stared at him, inching her body into the center of the mattress. Every fiber in her body ached for what he seemed to be offering her. His cock was fully elongated and bobbing seductively in his crotch. She watched him bend and take something from his pants pocket. She realized it was a condom. He ripped the wrapper and rolled the protection on his shaft.

Rachael had no will to stop the proceedings. Perhaps earlier, before he donned the condom, she might have had a second thought—but seeing he was prepared to take her and do it safely. She smiled slightly and raised both arms, welcoming him against her body.

“Damn you,” Nick muttered, as he set one knee on the bed. “I knew it would come to this.”