Can a vampire trust an angel, when that angel is Death?

Time has taken Brenna back to Boston, to the Tearoom, the place she whispered her first psychic predictions. Things are different now. While struggling to hang onto her humanity, she must discover why an angel has been imparting cryptic messages to her. Confusing as his riddles are, they make sense in the end, leading Brenna to Miranda.

Miranda’s had a haunting nightmare for years. The one constant is a gorgeous man, Julien, who whispers in her dreams. She doesn’t expect him to be her nightmare made flesh. Not until she comes home and finds her friends murdered does she realize she’s the vampire’s new target.

While Brenna is deeply in love with Veronica, she finds herself attracted to her angelic messenger. Fighting the pull toward him, she must risk her very soul to save Miranda. If she fails, all she holds dear will be destroyed. And if she succeeds then her whole life will change. 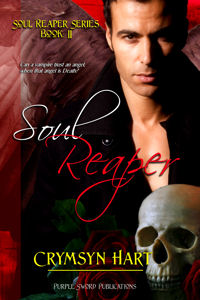 We chose to sit in the room off to our right. Tables and chairs were strewn around the room, many large enough for six to eight people. Then there were the tables for two, but the big attractions were the three ovenlike apertures to sit in. We chose one that was open. I plopped down in the cushy chair as Veronica put her coat on the chair opposite me.

“I’m going up to order. You want the usual?”

I nodded, remembering the first time Veronica and I had met in New Orleans. Our worlds had collided when she thought I was a vampire, and I assumed she was human. How simple life had been then. The world had been different when I was mortal, when all that mattered was getting what I wanted.

Veronica walked off as I settled back in the chair. Stretching my senses, I felt the minds of the humans pressing against mine. Their thoughts filtered through my head like radio stations changing too quickly. Losing myself in the noise, I caught glimpses here and there of their lives. As I did, I sensed something familiar. It was the same presence I’d felt earlier in the Tearoom. It only lasted a moment, then it retreated like it had been caught. Maybe it was some errant ghost following me, and now it would leave me alone. I pushed the presence from my thoughts and got lost once again in the distraction of the human minds until Veronica returned. As I let myself go, I didn’t hear my lover sit down. It wasn’t until the table hit my knee that I opened my eyes.

Veronica wasn’t the one sitting across from me. A man dressed in a black trench coat, black shirt and pants stared at me. His skin was white, almost as pale as mine was. Dark hair fell in waves to his shoulders while his eyes held the knowledge of endless time. His clear, pointed nails caressed the ends of the chair. His face was expressionless, passionless, as always, and his two pointed teeth rested on lips the color of bleached roses. This creature was no vampire, but the Angel of Death.

I sighed, wondering what he wanted. His appearances were always full of puzzling conversation, as he popped up at the most inconvenient times. Something about him irritated me, but I could never pinpoint what it was.

Hello, Brenna. It’s nice to see you too, Azrael said. His voice was flat but melodic as it burrowed into my mind.

“What are you doing here, Azrael?” I asked impatiently.

I assumed you might desire my company. You seemed lonely just a moment ago as you sought solace in the minds of the humans at this establishment.

My temper flared as he sat before me. It didn’t matter if he was an angel. There was just something about him. Like other angels, his energy was bright, fluttering across my skin like warm sunlight. There was also a slight chill that sank down to my bones, but that was his own special signature, since he was the Angel of Death.

He was the first angel I’d actually had a conversation with. However, I never got a straight answer from Azrael, so I’d stopped asking questions. Whenever I glimpsed other angels, they smiled, but were gone in a rush. Angels existed in a different dimension than humans, and normally weren’t perceived unless they wanted to be. Fairies were the same way. Humans saw the beings for something other than what they truly were. Since I’d become a vampire, I’d been able to see all these different creatures, but I’d kept this ability to myself and never told Veronica. I assumed she didn’t have the power.

Your intuition seems to be flourishing. Your companion is as beautiful as ever.

“What do you want, Azrael?” I asked again.

He smiled, showing more of his teeth. His canines made me wonder if he was something of a vampire himself, maybe living off the souls he collected.

Dead roses are the ultimate flora to adorn the remains of the deceased. In the end, it is in darkened dungeons that Destiny makes herself known.

“Is that all you came to say?” I growled. “What the hell is that supposed to mean? Can’t you just once appear, or go poof, or whatever you do, and—”

He leaned over the table, placing his hand on mine. A chill entered my heart, circulating throughout my body. It became hard to breathe as he held me in his thrall. His eyes burned with a blue fire that imprinted itself in my mind. It seemed like a star had detonated in his eyes, and the cold of space filled me. Liquid ice replaced my blood as the shards ripped my veins to shreds. My heart stopped in mid-beat as I froze from the inside, but it was so frigid it burned away my rage. That was his point. He’d never touched me before, never done anything except give me cryptic advice. But crypts were his territory.

Those close to you are only elements in your own destiny. You are the key. Think before I descend on your doorstep again.

The chair was empty.

Veronica walked toward me, holding two cups of steaming liquid.

“Brenna, are you all right?”