Inside the Empire's Imperial Palace the ambitious Drusilla is determined to use her sexual power to become consort and birth the next Emperor. Bloodthirsty and unwilling to let anyone stand in her way, she eliminates her competition and allies herself with Rufus, a powerful general. As consort to Emperor Marcus Flavius, Drusilla births a son, who will be the next Emperor, but still she is not satisfied. When Rufus realizes she is planning the ultimate plot against the Emperor himself, he abandons her, but Drusilla cobbles together an odd confederation of young and willing men who lust for her body and will do anything for it. Will Drusilla's evil plot succeed allowing her to seize power through her son, or will her past deeds come back to haunt her? 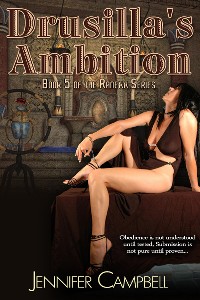 Her Master the Emperor of Ranexx had returned and Drusilla had expected to be overjoyed to see the muted gold and crimson tones of the imperial suite's walls along with the finely worked Karr-wood furniture which had the violet accents of the imperial house, but all she could see as she entered the imperial chambers was a golden-haired slut slurping the Emperor's erection as her old foe Tacita gently fondled the imperial balls. As usual Marcus was sitting on an overstuffed pillow next to a low table at which he normally ate and hand fed his pet slave girls from. The blonde who was so energetically providing pleasure was lying on one side of him propped up on her arm so her mouth could serve. Tacita laid at his other side her head resting on his chest with her eyes watching the blonde sucking as her fingers caressed his ball sack. Marcus' face was so blissful Drusilla wondered if he even knew she was there.

"May I serve too, Master?" She asked hoping to get a chance to display her oral skills.

"Not now, Drusilla, Decima is doing an outstanding job. Her skills are on a level with yours. She will be joining our inner circle as she has proven her loyalty by divulging knowledge of a traitorous plot against me." The Emperor seemed well pleased with this flaxen-haired slut gobbling his cock.

Drusilla cringed at the thought of another rival for the Emperor's attention, but she was a slave so she must accept Marcus' decision. She searched for another way to please him.

As Drusilla thought, Marcus came in Decima's throat giving the blonde her first taste of imperial seed. Decima looked up at Drusilla with a trace of Marcus' semen on her lips. "Our Master tastes good, Drusilla, but will there be enough for three hungry mouths?" To Drusilla this was clearly a challenge and she did not like challenges from other slaves.

"There will be plenty for me, bitch." Drusilla cocked her arm as if she was going to slap Decima, but Marcus' stronger arm interceded.

"It is not befitting a slave to be angry, Drusilla, especially at and equal. Control yourself or I will have you controlled. Do you understand?" There was controlled fury in the Emperor's voice and Drusilla struggled for a way back into his good graces.

"Yes, Master, I apologize to you. Are you hungry, I will have the kitchen slaves prepare grilled Tarakk for you if it is your pleasure." Drusilla hoped the offer would defuse Marcus.

"Yes, Tarakk sounds excellent. Have them do so, but go to the kitchen yourself Drusilla and supervise the preparation." Marcus got up and stared at Drusilla as if he was daring her to become upset and refuse.

Marinus who had been standing silent across the imperial chambers now moved closer. "Yes, and excellent idea, your highness, the kitchen has been short staffed."

Marcus took a seat at the low table and quickly Tacita and Decima slipped into the places to the left and right of him while Marinus sat across from him. For a moment Drusilla glared at Decima who was occupying the position she normally did, but Marcus ended her delaying tactics.

"Leave us and get to work, Drusilla, now. Oh and when it's time to serve, don't send a kitchen wench out, you serve. I still like seeing your lovely body at my table."

Drusilla was humiliated, but at least she understood this was Marcus' way of telling her this was only temporary. She was still part of the inner circle and that meant she could still outmaneuver her competitors under some future suns.

Drusilla bowed and turned to go, but Marinus had to taunt her with one more change in the normal routine. "Oh, before you go, I should tell you I've decided four bodies in the imperial bed is too crowded for his Majesty to get a good moon's sleep so I've worked out a rotation where one of you will be bound and displayed outside the bed each evening. We decided you would be the first to be displayed."

Drusilla had all she could do not to explode with rage. To be removed from the imperial bed was beneath her, but she swallowed her pride. "As you desire, Master Marinus." Drusilla fled to the kitchen to escape further humiliation, but after the Tarakk was grilled she bore the platter into the imperial chambers.

It was demeaning to serve their meal, Drusilla thought and she wasn't good at it as she had trouble balancing the large platter. When they were all served, she wanted to flee to the kitchen, but Marcus stopped her.

Inside Drusilla hope sparked for she thought he was going to invite her to join them at the table, but Marcus had no such plans.

He reached to the platter and chose three small pieces of the grizzliest part of the Tarakk which he tossed on the floor. "Eat, Drusilla, and don't ever forget your place again or your reminded will be far more painful. I sent you to Varius once before I recall and I will do it again if you need it."

Drusilla was used to eating from the Emperor's hand which was a privilege for her, but as she went to her knees to eat the Tarakk pieces off the cold stone floor she smoldered with resentment over how he was treating her.

Yet in her mind she was certain Marinus had managed all this in some way and she swore she would get even. Not now as she would have to behave for a while, but some day Marinus would pay for fucking with her.

Riding Her Tiger
Doris O'Connor
In Shelf
$3.99
Tweets by
sirenbookstrand