In a world where pollution and greed have pushed humanity to the brink of extinction, fertility is one of the casualties and the biggest priority. Men must prove themselves to fertile fems. For those who are lacking, or who cease to please the women who choose them, harsh treatment follows. Two new men, Jax and Trev, vie for a place among the elite studs of a beautiful fem. Will they succeed; will the love they feel for each other survive? 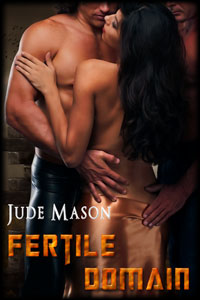 Trev dug a piece of hardtack out of the bag and gnawed on it, finally freeing a marble-sized chunk. Chewing, he sat looking thoughtful for a moment. “There’s a breeder looking for males inside the walls at the southern edge of the city. She’s young, and from what I’ve heard, good looking.”

“That’s where you’re aimed for?” Jax reached for his food bag. It was much lighter when he palmed it. Thoughts of trapping a rat or two crossed his mind again, but only for a moment. Rabbit was better, and maybe he’d find better game. “Water.”

Trev nodded, pulled the bottle loose, and handed it over. “Take your fill.” He rubbed his belly and smiled. “Yeah, I’m heading for the fortress. I heard tell that tomorrow she’ll be looking at new men. I plan to be among them.”

Unscrewing the cap, Jax nodded, then drank deep. The water was fresh and sweet, much better than the stale lot he had, and he savored it as it slid into his stomach. Dragging the back of his arm across his mouth, he capped the bottle and handed it back with a quick, “Thanks.”

Trev’s hand brushed his and he glanced down at the smaller one, the fingers shorter but strong looking. He didn’t pull away, neither did Jax. “It’s going to be a cold one, what with that rain and wind.”

Trev’s eyes found his and both men smiled. “Yeah, I know,” said Trev.

“You have a good blanket or bag?”

“It was before it got wet. Don’t know what the rain did to it.” His smile broadened and he pressed his hand even more firmly against Jax’s. “You?”

“Mine’s a good bag, and it’s dry.” He released the water jug and sat back, giving Trev time to get a good look at what he had to offer. The room grew dim and Jax peered across the room at the lone, boarded up window, its broken panes filthy with years of sludge. Through the wooden slats, the sky had darkened. Rain beat heavily down on the roof and hissed on contact. The fire crackled between them, needing more fuel, but was bright enough nonetheless. He was already getting hard. Just thinking of the smaller man sharing his bag was enough to bring back memories of men he’d had sex with over the past couple of years. In the crèche, they were encouraged to explore and enjoy the company of their age-mates. There was no guarantee any of them would have anything but male companions. When he left, or had been tossed out, even that release was mostly denied him. He assumed it was the same for Trev.

“Do you want to share?” Trev asked, his voice trembling.

Jax lowered his eyes, and saw the nice bulge showing between his slender thighs. “Yeah.