If the spirit and magic of the winter season wasn't enough to keep you warm as the weather turns cold, you can count on the erotica in this spicy anthology to do the trick! So let it snow, and curl up with your favorite eXcessica authors and this sexy, seasonal anthology,  bringing you the best of all things winter! Stories included from: Sommer Marsden, Kiki Howell, Mallory Path, Phillip Sweeny, Paul McDermott, J.M. Snyder, Alessia Brio and Will Belegon, Giselle Renarde, Rachelle Le Monnier, Saskia Walker and Selena Kitt.Warnings: This title contains graphic language, sex and some m/m sexual situations.

From "Core Deep" by Selena Kitt:
Mary used an instrument they jokingly called "the tweezers" to extract the frigid sample from the freezing unit and lift it carefully out of the bag. It was a perfect record of history, an effective time capsule, storing a snapshot of the earth's atmosphere seven-hundred-and-fifty thousand years ago. The tests would tell them the age of the ice within a few years here or there. It would also tell them all the common meteorological data from that time period--precipitation amount, solar activity, air temperature, atmospheric composition.But she wasn't interested in any of that. The millions of tiny air bubbles in the ice had revealed something to her even more amazing than greenhouse gases or evidence of climate change."Into the cheese grater with you." Mary placed the sample into a round, stainless steel extraction flask, closing the door and turning on the machine. It would grind the ice into fine chips in a vacuum, release the air and trap the gasses without any contamination to taint the sample. This, too, was attached to a laptop, and the results would be analyzed by computer.She couldn't resist coming to watch for the results of the spectrometer over Finn's shoulder. The laptop just showed a slow-moving bar that read, "Analyzing " Please Wait" beneath. His hood was thrown back, and she noted the way his jaw clenched and unclenched, the way he pointedly didn't turn to look over his shoulder at her.She also noticed the way his dark hair curled at the nape of his neck--long, too long. He needed a cut, but of course there was nowhere to get one out there. She wondered if he would let her do it, and just imagining running her fingers through the black raven's wings of his hair made her feel breathless."Well, there it is." Finn sounded annoyed as he pointed to the screen and she almost laughed."I told you the last one wasn't a contaminated sample." She fought the smug urge to stick her tongue out at his back.He rolled his eyes, pulling his latex gloves off and reaching for his warmer ones. "Two samples don't make it conclusive.""Did you run it through the gas chromatograph?""Does Old Bessie moo?"Mary touched the laptop screen, pointing to one of the longer spikes. "So this one here...""Unidentifiable.""Finn! Look!" She grabbed a three-ring-binder from the table, flipping it open and holding it up next to the screen. "It's exactly the same as the last one. Look at the graph.""I'm looking." He was looking, but he wasn't happy about it."And this..." She turned the other laptop on the counter, finished analyzing its own data, so he could see the reading from the other machine. "See here? It's the same. Unidentified."Finn shrugged. "It doesn't necessarily mean anything.""What are you afraid of?" She couldn't believe his nonchalance, his lack of curiosity about this new discovery.He quickly turned off the power to the laptop, not even shutting it down the way he should have. "I'm afraid you're feverish and I'm going to have to radio us out of here before you start hallucinating."Hurt, she felt her chest tightening and confronted him, her hands on her hips. "I'm not hallucinating lab results, Finn.""Okay, so you got the results you were looking for," he snapped, reaching over and stabbing the power button on the other laptop. "Can we go to bed now?"Her face and body felt frozen, colder than she'd ever been out in the arctic chill. "I bet you every single one of these deeper cores will show us the same thing. It's getting stronger, you know, more concentrated, the deeper we go."He shrugged again, turning toward the door, a dismissal."There's something down there!" She wanted to throw something at his head and her hands clenched into fists. "Something no one has ever discovered before!""Well, if it's down there, it will still be there in the morning, won't it?" he asked over his shoulder, opening the door and letting in a blast of frigid air. "Are you coming?"She'd butted heads with him before--they'd had playful, week-long disagreements back and forth sometimes. But she had never experienced him like this--cold, dismissive, obdurate.Her righteous elation dampened by his reaction, Mary snapped her own gloves off and reached for her warm ones, the action an assent, and he watched her put them on before he went out the door. She knew he expected her to follow him, and she did, feeling dizzy with her discovery and his trivialization of it. Leaving everything, she just turned out the light and shut the door behind her.Her cheeks felt as if they were on fire as she trudged after him in the powder, and the cold hit her like a wall, actually stopping her breathless in the dark. Finn's retreating back, heading toward the trailer, was just visible through the blowing snow. Her heart hammered hard in her chest, her legs like lead, and she managed to call out to him once before she went down to her knees."Finn!"For a minute she thought he wasn't going to stop, that he was going to childishly storm off and leave her. And she didn't think she could get back up. Her legs felt too weak, trembling, and she let her body go, collapsing on the snow and rolling to her back, giving up. It didn't matter. He didn't believe her, he didn't care. None of it mattered. The stars were bright jewels in a velvet sky, so close she felt she could reach out and touch them, and she actually stretched a hand out into the darkness.Then he was kneeling over her, wedging his arms beneath, lifting."I think I'm sick," she murmured."Ya think?" His gruff comment was the last thing she remembered before the stars blinked out. 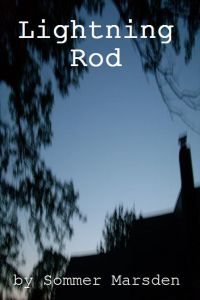 The Baumgartners Plus One
Selena Kitt
In Shelf
$3.99
Tweets by
sirenbookstrand