In this anthology, we bring you stories about men who just can't seem to keep their hands off each other and whose lives become emeshed and entwined in hot, romantic ways. Even in spite of some sort of obstacle, these couples manage to stay stuck on each other, so don't worry, it all ends with a wonderful, happy ever after! Don't miss eXcessica's first gay male anthology! Stories included by J.M. Snyder, Alex Jordaine, A.P. Miller, Gavin Atlas, Kris Klein, Kenn Dahll, Sabb, Phineas Magnus and Selena Kitt.

"...damn, did the encounter give me tummy tugs. A perfectly delightful story." (for “Conditioning” – A.P. Miller) "Yowza. Hot, sexy and oh so naughty." (for “Stuart’s Not Little”- Kris Klein) "Vivid imagery, hot first encounter sex and a breath stealing moment toward the end made this the perfect short story." (for “View from the Barn” – Sabb) "Oh My God! Love it!!" (for “Tanning” – Phineas Magnus) "The twists and turns in the story pulled me in and never let me go. And yes, super hot men were having super hot sex. Yum!" (for “Second Chance” – Selena Kitt)

Excerpt from “Star-Crossed” by J.M. Snyder:

When the captain announced the new gunners, raucous shouts and wolf whistles filled the air. They were a rowdy bunch-gunners usually were -- but Reth could hear Xan’s voice rise above the others. With a glance at the new crewmembers as he sipped his cocktail, Reth tried to infuse enough alcohol into his system to justify speaking with Xan or slinking off to bed, one of the two. As the crowd applauded, he wandered over to the food table to pick at a display of chilled fruit. He couldn’t close the distance between himself and Xan -- after seven months, a galaxy kept them apart. But he had to say something, didn’t he? Make it look like he’d moved on, even if he hadn’t? Show he was above --

A breathy voice sighed into his ear, startling him. “Hey, sexy.”

Reth jumped and took a step back, only to find himself in Xan’s quick embrace. For one delicious moment, he savored the strong arms around his waist again, the warm chin resting on his shoulder. Then he turned and bumped into the food table in his haste to get away. “Xan. Hey.”

“You remember my name,” Xan said, running a self-conscious hand through his thick hair as he grinned. “And here I thought you might’ve forgotten me.”

How could I? Reth wanted to know. Those dark eyes still shone in the same infuriating manner, as if lit from within. Those lips still smiled as wide, Xan’s heady scent still aroused him like an aphrodisiac. And, God, that hair! Still long, still tousled, still streaked with strands of an impossible shade of blond.

Xan stepped closer, as if the gulf between them meant nothing. His voice lowered to an intimate level that Reth still heard in dreams. “Miss me?”

Reth turned to frown over the food, preoccupied. “Well, you know,” he started, then because he didn’t know what to add to that, he popped a frozen strawberry into his mouth and concentrated on the icy chill that made his teeth ache. With a shrug he hoped looked nonchalant, he added, “I thought you said you were coming right back.”

“I did come for you,” Xan teased, emphasizing the word come. When Reth didn’t respond, Xan covered the hand reaching for another strawberry with his own. His smile slipped a notch. “I’m here, right?”

Reth sighed. He picked at the berries and refused to meet Xan’s unnerving gaze. Wasn’t he supposed to be over this guy already? “I meant --”

“What?” Xan asked. “You have someplace more private in mind?” 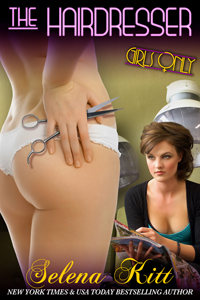