Curvaceous Terri hates going to the gym to exercise but she really loves the view of John's hard, pumping thighs. John is always at the gym, working on his definition. He thinks he's lanky and scrawny and is convinced the sexy, curvy new girl will never look twice at him. A twist of fate brings them together but will they be able to get over their own insecurities and take advantage of the season of love? It is Valentine's Day after all. 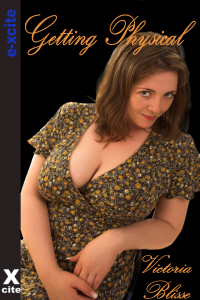 I noticed her the moment she walked in, the newbie. She was just so different. Even under the baggy clothing you could tell she had lots of beautifully feminine curves. In all the time I'd worked out there, in the gym I'd never seen a woman so wonderfully well-endowed, and my gaze was drawn to her form almost against my own will.
Her gorgeous brown hair was unruly, with mischievous curls that kept escaping from the confines of her simple ponytail. Her green eyes were bright and sparkly, like light reflecting off a leaf on a hot summer's day. She had lips so plump and luscious they just begged me to kiss them.
I watched as Mark led her around the different machines. I felt a stab of unreasonable jealousy as he touched her arm or looked into her eyes. I'd never felt such an instant need before. I ached with the want of her, but I didn't have the courage to approach. A sensual, curvy woman like that wouldn't want to know a stringy bean-pole like me. No other woman had ever wanted me. I was too tall, too thin, and too shy for any of the girls in school or college, and no hard-bodied girl at the gym had ever aroused me before.
My heart nearly gave out when she settled herself on the bike next to me. Closer to her, I could see even more of her curves as the large, grey T-shirt clung to them and then fell away, rhythmically, as she rode. I couldn't keep my eyes from her and the way her body flowed so sensuously. On one occasion our eyes met briefly. She must have felt the weight of my gaze on her. Oh, hell! I must have been really staring!
She misbalanced getting off the bike, and I reached out in instinct as she fell. I grasped the top of her arm, but she'd already righted herself by clinging onto the handlebar of my bike. I still wanted to make sure she was okay, and so somehow I found myself flirting and flustering like an awkward teenager. I was just being friendly, but I don't know if she realised that. I had verbal diarrhea; words dropped from my lips before my brain acknowledged them. The words kept coming even when I knew I should have shut up. I hoped she didn't think I was weird and creepy.
I'd never been awfully good with women. That's probably why at twenty-eight I was still single and, embarrassingly, still a virgin. I didn't think about it most of the time. I had my gym and my work; between the two I barely had time to get morose. Seeing Terri—it was so good to put a name to her beauty—made me realise how far in the past it was when I actually last flirted with a woman. I was certain the way I behaved had made it completely impossible for me to ever hold and caress that beautiful, feminine body.
Each night after that I arrived at the gym early and didn't leave till closing time, and every time I was disappointed when she didn't walk in. I didn't catch even a glimpse of her, and I started to believe she'd never come back. Then one night as I jogged along on the treadmill, I heard her soft silky voice behind me. It set my heart throbbing and pumping harder than any treadmill ever could.
She didn't get close to me all evening. I watched as she rowed, those magnificent breasts pushing out in front of her each time she pulled back. I feasted on the sight of her rounded buttocks bouncing as she walked quickly on the never-ending road of the treadmill. I wished I could flow over her lips like the refreshing water she took in between exercises. I longed to hear her voice, to see her smiling at me.
I was going to go over and speak to her, once, twice and more times, but my legs wouldn't obey me. Nope, I just couldn't bring myself to approach her. I knew I didn't have a chance with her; she was out of my league.