On Samhain the veil between the spirit world and the living is paper thin, and psychic Tristan can’t ignore the voices that haunt him. An especially strong spirit recognizes his innate ability and won’t stop haunting Tristan until he promises to warn his brother about a lurking danger. Tristan’s unique telepathic abilities also leave him curiously attracted to the dark silence surrounding Kelly’s mind.

Kelly is a vampire but he is not immune to the young man’s charms. Unfortunately, the people that would kill Kelly now want Tristan dead too. Can Kelly use his dark powers to protect them both?

Please Note: This 20,000+ word short story contains a gay psychic human who is in way over his head with one head-strong lost soul, and a very sexy vampire, strong language, and adult situations. All characters depicted in this book are over 18 years old. The story is followed by a free preview to the next book in the series, Tantalizing Tentacles.

Other Books in the Halloween Treats Series: 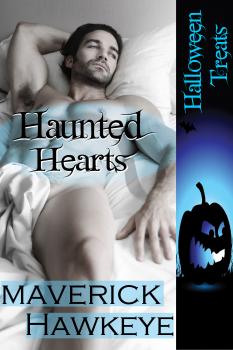 A strange man in an overcoat was walking and talking to himself as if he were mad. Kelly could hear him muttering away to himself as if no one was listening, arguing with the voices in his head long before the other man noticed him. It put Kelly on high alert. He was used to dealing with difficult people and the barn was located close to the city where unsavory characters sometimes wandered in. This could be anyone living on the streets or a homeless person looking for something of value he can pawn or sell for drugs.

Kelly knew from experience, this kind of guy was best handled by direct confrontation.

Kelly gritted his teeth and readied himself for a fight. He marched straight up to the stranger and got right in his face. He noticed the man’s shoulders slumped when he first noticed him. He seemed distracted. The man whispered in a fierce whisper, “Shhh! Let me talk to him.”

If he wasn’t crazy Kelly may have thought the guy was slightly handsome. He was dressed nicely under that large overcoat and he smelled clean as if he just got out of the shower, of soap and sandalwood. A very manly combination .

The frown between Kelly’s eyes deepened. He had supernatural hearing and could sense every heartbeat in the vicinity. It was part of his curse as a vampire. There was no one else but the two of them. The man was either crazy or on drugs, but he would get no sympathy here.

“You don’t belong here, stranger.” Kelly would have to get rid of him and the best way to that was being straightforward. He didn’t need anyone or anything to disturb his horses for the night. They were all settle in and happy. “I don’t take kindly to thieves.”

“Hey, I’m not here to mess with anything. I came to see you. You are Kelly Mills.” The man looked strangely on edge. His face was drawn tight at the edges, his lips pursed in dismay.

“What?” Kelly stopped in his tracks. No one ever came to see him, and he didn’t know this man from Adam. There was no way he could be telling the truth but he didn’t look like a liar either. Kelly was closer now, and he could see by the lines on his face he was younger than he first thought, probably in his early twenties with a freshly shaved face. His short brown hair was combed away from his face and fell in layers, but his smell hit his nostrils for the first time. He smelled clean and good.

“You’re Jordan’s brother.” The guy knew he made a mistake as soon as the words were out of his mouth. He cringed the moment he saw Kelly’s reaction.

Kelly’s nostrils flared and rage filled him. “That a**hole sent you?”