More than anything in the world, Daniel wants to be a family again. After the loss of his parents, young Daniel’s life has been filled with longing and sadness. Living with his Uncle Josh is okay, but deep in his heart, Daniel misses the family life he once had. On the first magical snow of the season, Daniel makes a heartfelt wish to have a loving family once again.

Josh can’t get over the grief of losing his twin sister. Every time he looks into the sweet, expectant face of his young nephew, Josh knows everything he does is wrong. Knowing he needs help with Daniel, he hires a nanny, Nick. Fighting his guilt and attraction toward the new nanny, Josh finds himself in a downward spiral of shame and unhappiness. Lucky for him, Nick is determined to make a home for both Daniel and Josh. Despite how hard he fights the attraction and feelings he has for Nick, Josh doesn’t realize he’s fighting a losing battle…because of his innocent nephew’s Christmas wish.

More From Men of Charlestown

A light, warm touch on his lips woke him from his comfortable slumber. He blinked a few times to get his eyes to focus, hazily remembering that he fell asleep looking at the colorful lights of the tree. He looked up into the Josh’s sparkling peridot colored eyes, kneeing beside him and was gently tracing the outline of his lips with his fingers. Josh’s light touch felt good against his lips. He could smell the faint aroma of the spicy hand soap they used in the bathroom and kitchen on his fingertips, making them smell clean and delicious.

“Hey, sleeping beauty. You were resting so peacefully I almost didn’t wake you up, but it’s after midnight and I know you’ll be more comfortable sleeping in your own bed than on the floor.” Josh’s deep tenor voice spoke smoothly over the faint Christmas music still playing in the background.

“Oh, Josh…I’m sorry. I didn’t mean to fall asleep on you guys. You and Danny must think I’m terribly rude. I was so relaxed and I only meant to doze off for a moment, not for several hours.” He reached his hand up and placed it lightly on Josh’s chest, right where he could feel the strong beat of Josh’s heart.

Josh snorted. “Nick, don’t worry about it. It wasn’t too long after you fell asleep, Daniel conked out, too. I put him to bed a few minutes ago and he never woke up. Although, I think that boy could sleep through World War III going on around him and he’d never wake up.”

Nick grinned and nodded. “That’s true. He is a heavy sleeper,” he stated as he began to rub Josh’s chest. Josh’s nipple hardened up through his heavy black t-shirt and Nick felt his prick start to harden and push against the zipper of his jeans.

They hadn’t even kissed yet and had barely touched each other, but just being around Josh was enough to make him crave the older man’s affection. He hoped that Josh felt the same. He could feel the electric chemistry flowing between them, but there was something else that was there as well. Nick knew that this was much more than just two people attracted to one another. He instinctively realized there was a budding feeling of affection and possibly other stronger emotions that they shared for each other between them.

Nick had a feeling that this would lead into something special. He had never experienced such a pull to be part of another man’s life before. He remembered praying that one day he would find his own once in a lifetime love and he had a suspicion that he was looking at him right now.

Josh’s heartbeat faster under his palm, as his green eyes looked at Nick’s mouth for a few moments. He looked back into Nick’s eyes, nervously licked his lips, before he leaned down and delicately pressed his warm, moist lips against Nick’s own in a tender kiss. Nick slid his other hand up Josh’s arm to the nape of his neck and pulled the smaller man closer to him to deepen the kiss.

Nick felt the vibration of Josh’s moan against his mouth as it pressed harder against his own. He slid his tongue across Josh’s mouth and gently nipped at his bottom lip. Josh’s lips were intoxicating. They tasted a little like the hot chocolate he had drank earlier and when he opened his mouth and met Nick’s tongue with his own, Nick pulled him closer to him letting their tongues slid around each other, exploring and reveling in the taste of each other.

Josh eased his body fully against Nick’s as he lay on top of him. Nick relished the way Josh’s body felt so he wrapped both arms around the smaller man and hugged him tightly against him.

As they slowly explored the moist recesses of each other’s mouths, Nick eased his legs apart cradling Josh’s hips allowing them to start moving their erections together in a lazy, deliberate rhythm. Their hands were gentle as they ran them over each other’s bodies in a slow sultry exploration.

Josh’s smaller body felt so good rubbing against his own and even though both men were aroused from the passion they had for one another, they both seemed to be in no hurry to rush things along. Instead, they were content with putting their passionate feelings aside for a few moments and enjoy the intensity of getting used to the way each other felt in their arms. 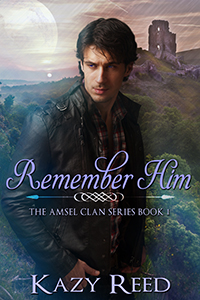 Remember Him
Kazy Reed
In Shelf
$5.99