Zefran is a witch-vampire, a duality of blood that dangerously complicates his life. He’s hired as the Monsters inK chef—on one condition that in exchange for his work, he is granted sanctuary. Zef believes that it will protect him from all trouble. How wrong can a guy be? Trouble enters his life in the form of the snow leopard shifter, Shandor, whose sexy smile and emerald eyes are firmly set on Zef. The damn cat won’t take no for an answer and Zef and Shan play a game of catch me if you can. More than whiskers twitch in the game of chasey between the two men. But just when Zef thinks he can trust a cat, Shan discovers the truth about Zef and that sets the cat among the vampires…

Shandor studied Zefran. “They say in certain circles that people who have magic in their blood are very imaginative—in bed and out of it. Since you’re a witch, you wanna tell me if it’s true about magic and imagination?”

Zef snorted, pulled up his book, hiding behind it, and started to read. He looked up at Shan, frowned and returned his gaze to the book.

“Yep, I know that, wise arse. What kinda book?”

“Paranormal romance. She’s my favourite author.” Zef held up the cover and Shandor laughed. “Smirk all you want, cat-boy, but this gal knows how to write and she gets the Blood kin almost down right. For a human, she’s pretty clever.”

Zef nearly dropped the book in shock. “What? You saying a guy wrote this? A lawyer? I don’t believe you.”

“It’s true. Ray’s our lawyer. He and Taj are off world right now. The lion has more relatives than Gyng has had hot dinners and that’s saying something.”

“Are you telling me that RJ Delaney is a guy?”

“Yep. When he and Taj get back from family visits, you can meet them. Ray’s a quiet sort, but don’t let him fool you. He’s got Taj caught by the ruff, no mistake.” Shan sampled another chocolate and chewed, his eyes sparking mischief. “You read the love scene yet?”

“It was the only thing that spoilt the book for me. I mean, the love scene was intense. But, hell, you can’t do it that way. It’s physically impossible.”

“For a human, maybe, but not for a cat. Attunement is difficult and Ray really was naughty to reveal some of that cat secret in his book.”

“That, honey, is a secret shared only between a cat and his mate.”

“Uh, you mean there’s more to cat sex than what the author wrote? Hell, the scene was…uh…”

Zefran sighed. “Well, you can’t do it that way. Piece A just wouldn’t reach slot B.”

“Want a bet? You can when mates are attuned. And it depends on the length of the piece in question, honey.” Shan laughed. “Are you telling me you’ve tried?

Shan picked up another chocolate and tossed it into his mouth, eyes glowing. He eased back in the chair, smiling. Zef tried to ignore him and returned to his book, replacing his earbuds and began to read.

“You’ve read that page for the second time, Zef,” Shan said, trying not to grin, because his cat seduction was finally paying off. The witch-boy was really wired.

Zef put the book aside, and tore out the earbuds. “Haven’t you got something better to do than sit here and annoy me?”

“How am I annoying you? I’m just lying back, minding my own business.” 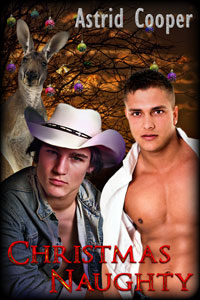 A Sin He Could Live With (MM)
Lacey Denair
In Shelf
$4.50
Tweets by
sirenbookstrand