Change is in the air. The question is—can she survive it?

Lilly Archer is about to enter into a new Total Power Exchange with a man who has turned her on forever. The condition of this new contract, though, might just change her mind and is guaranteed to open her eyes to a whole new kind of kink. 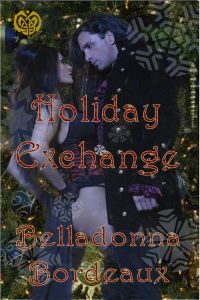 Change is good. Lily Archer stretched out the tense muscles of her neck. She licked her suddenly dry lips. She gave her last Master credit. He’d chosen the next holder of her Total Power Exchange well.

A soft, sad sigh broke from her throat as she took in the three men standing in the bedroom. In the background, Christmas Carols played through the surround system.

Blowing out a breath, her gaze flew to Andrew Denton, the man currently holding her contract—the vampire who’d taught her the ways of submission. Tears gathered in her eyes. The economy had brought the one-hundred and twenty-five-year-old blood sucker to find new homes for many of his sex slaves. She was one of last to find a new Master.

She blinked the tears away. Her issue was that he was her comfort zone. She knew exactly what to expect with Andrew. She understood the rules of the sexy games they played. How he liked to fuck her.

In a sickening way, the vampire represented stability and, to a degree, safety.

The other men in the room were ones she was intimately familiar with. Both Sloan Hughes and Jonathan Markum had fucked her in the past.

Her preference had always been Sloan. The werelion was absolutely fantastic in and out of bed. He was kind and gentle unless he sensed she wanted a hard ride.

Honestly, she really liked him—maybe even loved him in a school-girl sort of infatuation way. Her desire for him had been the first step in the softening of her emotions toward him. The way he treated the other slaves who serviced him only intensified the feelings she harbored for him.

Unfortunately, Andrew owned her, tit, pussy and soul. It all changes tonight.

Well, she was working on it.

She wondered about his inclusion in the ceremony that would mark the shift from one master to another. Did he want her to become a part of his harem? That didn’t make any sense.

Ripped from her contemplations, she took a deep steeling breath. With a small nod, she did as she was told. Part of her, a big part of her, wanted to drop to her knees and beg Andrew to figure a way out of his current financial crisis. She knew that was impossible.

Change is good, but I hate it.

She didn’t stop her forward progression until she stood directly in front of Andrew. The other men slowly circled her. She was used to feeling like a piece of fresh meat being perused for purchase.

“Tonight you will begin a new journey with a new master. Sloan has agreed to become your Dominant.”