In the Willow Woods - Oikoni Stone

Step into the magic of the Willow Woods where Nainie, the son of a dryad and a shadow spirit, has come of age to take a wife. He longs for the woman in white who lives across the river, but venturing beyond his clan’s boundaries is forbidden...and dangerous.

Even before their first kiss, Nainie knows Tiir is the only woman for him. The ripples in the river move toward her rather than away. Her eyes are like the lake when the noonday sun touches the water’s surface, blue and placid, bespeaking another place far from the stone city where she resides. She is different, but he feels she is the same as him—one who stands apart from those of her clan.

They come from different worlds—his, a wilderness life of magic, promiscuity, and cultural hierarchy—hers, a mysterious stone walled village he is not allowed to enter. After gathering his courage, he crosses the wall and finds himself in a cold, ordered world of slavery to a cruel master. Ensnared in her master’s hold and unable to get word to Tiir that he is being held captive, Nainie must rely on the kindness of strangers to plan his escape and find her again. 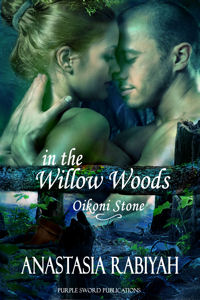 In the Willow Woods - Oikoni Stone

"Oikoni Stone is a sweet romance about two very naïve and innocent lovers. …The love and kindness that Tiir and Nanie had for each other and for those around them (is) very heart-warming. The attraction they have for each other is passionate yet so innocent it took my breath away…” -Kim, Cupid’s Library Reviews

Nainie crossed his hands in his lap and leaned forward, watching the mysterious woman from his vantage, hidden among the draping branches of a willow. Sea green leaves caressed his bare arms and tickled his back. His thick strands of looping black hair waved in the light breeze, forcing him to brush aside tendrils that fell in his eyes and shrouded his view. He dropped his hand and squinted at her pale brilliance. The woman wore white, a swathe of pale cotton fabric that hugged her curves and covered her so much that it offered her modesty—a rare thing in his clan. Every morning he ran from his village in the willow woods and climbed this same tree, his bare feet gripping the gnarled trunk and his fingers lodging in each available crevice until he reached this same lookout. I wish I knew her name. A smile lifted the corners of his mouth.

She knelt beside the river, her eyes downcast and her honey-colored hair drifting just as unruly in the breeze as his. The woman pulled the leather strap from her shoulder and dipped her head beneath it in order to retrieve the clay jug balanced on her back. The ripples across the river moved toward her rather than away, a small detail that entranced him.

Nainie puckered his lips in a wind whisper when the side of her fabric wrap fell off her left shoulder, revealing more of her fair skin and the top of her small, round breast. She dipped the jug into the water and waited. The water filled fast. After pulling the jug free, she wiped the lip with delicate fingers. The woman adjusted her clothing, hiding her body, and he pouted at the loss of such a tempting view.

Beyond the white plastered wall, her clan called to her in feminine voices and Nainie sighed, disappointed. She would go, as she always did, and he’d not see her until the following morning.

He swung his bare feet in mid-air, waiting for her to hurry along the stone-lined path. Her clan is unusual, he decided. People should live in the open, not behind rocks.

When she disappeared beyond the high berry bushes, he slid forward and dropped to the ground, landing with ease on the thick blanket of leaves covering the willow wood floor. The tassels on the edges of his loincloth tickled his legs. He glanced over his shoulder. The stone path the woman took wound away from the river’s edge, and he could see the smooth prints her sandaled feet left behind. “Strange,” he whispered. “If I separated my skin from the earth, how would I know what lay beneath me?”

He shrugged and ran his hand through his hair. “Tomorrow,” he said to the breeze. He knew he wouldn’t approach the woman. The thought always dwindled and vanished when he returned home to his own clan. He twisted his arms, stretching his waist before he burst into a steady run.

Willow branches whipped past him like leaf-crusted snakes. He dodged them, his bare feet soundless over the ground. Chasing his shadow all the way home came as second nature just as his ability to blend with and become a creature of shadows. Nainie was not like the others in his clan; he couldn’t shift into the shape of trees although he could hear their voices on the winds. He longed to find a woman like him, one who stood apart as he did.

Soon he smelled the single fire in the bointpit. He slowed and inhaled the scents of his clan, tanned leathers, roasting meat, and the sweet perfume of the maidens who wove jaiga flowers into their hair. Nainie stopped at the edge of the village.

Three longhouses made of wood and mud mixed with fallen leaves stood around the bointpit. In time, he knew he would stand there and take his first wife. He blushed at the thought and wondered who his father would choose. I want the river girl, he thought. His body burned at the thought of her. He clenched his fists and frowned. What would it be like to taste her lips? To touch her skin?