The Wolf Within Book 4

For Stanzie, being herself is more dangerous than ever.

There's no place like home...or is there? When Stanzie is asked to investigate her birth pack- Mayflower--she isn't prepared for what she finds. No one respects the Alphas and the newest adult member of the pack is being encouraged to leave. Why?

To make matters worse, the men are dangerously intent on mating and shifting with her. How far will the pack she thought she knew go to get what they want? Without her bond-mate, Liam, Stanzie must face this alone and, barely ahead of threat of violence, must solve the mysteries, and fast. 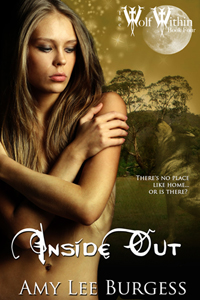 The forest beyond the fence beckoned. The scent of pine and earth filled my senses and added a layer of complexity to the smell of sweat and pheromones.

I contemplated the men in front of me. Say I would choose one of them--which one? Wes Hanover I dismissed without hesitation. Mark went next. He was like an older brother. Shane, Dirk and Terry were more like uncles, much as they wanted me to forget that. I suppose if I’d stayed with Mayflower I might have been able to do that after I’d been accepted into the pack as a contributing adult versus a nurtured child, but I hadn’t stayed with the pack.

That left Scott, Tony and Alan.

Alan was so cute, but he needed a teacher and a guide

Scott was technically hotter than Tony and my girlish crush on Tony had faded.

I took a step toward Scott because my pulse raced and the sounds that escaped Dorothy and Darren made me wish I hadn’t been so hasty to turn Darren down.

Scott and I locked gazes and a small, satisfied smile curled the corners of his mouth.

Before I got more than three steps, Tony moved forward to block my path.

“Stanzie.” His voice was husky with desire. “I want to talk to you.”

“Oh, yeah?” I drawled and someone sniggered in the background. Talk was the last thing on his mind.

Tony wrapped his arm around my shoulders and guided me away from the rest of the men.

He sat me down on a chaise lounge and rocked back on his heels as he assumed a semi-kneeling position so our heads were level. He handed me a bottle of water and his eyes dared me to drink it.

I took it, but didn’t drink. Frustration flared in his dark brown eyes but he smiled and braced himself with a hand on the arm of the chaise lounge.

“It’s been a long time coming between us. You know that. You had to feel how much I wanted you ten years ago. I still do. Now we can finally find out what we’re like together. Pretty hot, I’d guess.” His eyes caressed my body with a slow, seductive deliberation.

He smiled and my stomach did flutter. I pictured his mouth on mine and a slow flush heated my body. His smile became wickedly sexy and he leaned in to kiss me, but I turned my head so his lips brushed my cheek.

He chuckled when he saw me raise the water bottle to my lips.

Three things struck me in the few seconds before the bottle touched my lips.

The bottle, while cold, was dry, not covered in an icy slick of water.

Tony’s expression of triumph was due to more than just the fact I would hunt with him.

There was no cap.

I remembered the first bottle of water he’d given me. It hadn’t been wet or capped either.

The inevitable conclusion? Neither of them had come from the coolers. Tony had given me bottles of water from a different supply.

Cold panic doused the fire of passion in my head and my body. He’d put something in the water.

Rudi’s contorted dead face swam before my eyes. The bottled water with the blue label he’d drunk from at the Paris Gathering had been laced with poison.

Was Tony trying to kill me?