Kate Mahoney had been in love with Michael Vasquez from the moment she laid eyes on him at their busy, city law firm. For years they had maintained a close professional and strictly platonic relationship, with unfulfilled desire always just under the surface. On a blistering summer's afternoon, mid trial, Michael breaks some news to Kate that brings their passion to boiling point. 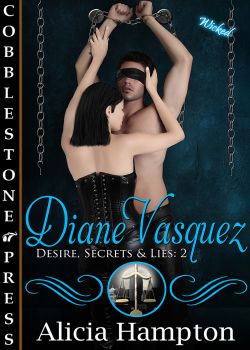 Katie stripped the bed within half an hour of him leaving, partly out of shame but mostly out of practicality. They were soaked with sweat and sex, and she couldn’t resist bringing the wad of bedding to her face and inhaling the afternoon activity before the washing machine baptism.

They had flirted for years at work with varying degrees of success, this afternoon being the climax, so to speak. Lunches, drinks after work, flowers when her mom died, a shoulder to cry on when her marriage fell apart. Simple gestures of friendship, always with the undercurrent of mutual, physical desire. His wife had always stood squarely in between them. They had agreed to never cross that line.

But this afternoon, things had changed. As she stood staring at the washing machine, Katie realized she could still smell him on her skin and felt ashamed. She went to the shower and stepped into the hottest water she could stand and touched her body where his hands and mouth had been. Instead of trying to block it out, she allowed herself to luxuriate in the memories of the afternoon...

Michael Vasquez had come over to her home to drop off some files for the Williams’ case. She’d been working from home so she could concentrate on prepping for the upcoming trial. He placed the files carefully on her dining table, took off his suit jacket and hung it squarely on the back of a dining chair. He methodically rolled up is shirtsleeves, revealing tattoos from a past he had long left behind. A reminder of how far he had come. Street to Stanford Law.

She finally looked up from her laptop. “Is it hot out?” She hadn’t stepped foot outside of her glacial dining room in two days.

“About eighty-five,” he said, mopping his brow and the back of his neck with his ever-present starched handkerchief, a habit that reminded her of her dad.

“Water?” she offered, starting to rise from her chair.

“I’ll get it.” He waved her back to her laptop. “How are your closing remarks coming?” he asked, reaching inside the refrigerator. She heard him opening, sniffing, and closing leftover boxes.

“Ugh. Crap. I can’t get a flow going,” she complained, leaning back in her chair.

He came back into the room without water, but eating out of a small plastic box.

“I don’t know how long that’s been in there,” she said in a warning tone.

“Tastes fine,” he said with a full mouth and a shrug.

He came around behind her and read over her shoulder. He smelled of light cologne, fresh linen, and whatever he had found to eat. Acutely aware of his closeness, her body started to respond.

“Change the start of paragraph three to be more of a statement rather than a leading sentence.” He pointed at the screen for emphasis, his deeply tanned forearm gently brushing her arm. “And don’t rush into the conclusion. Pause for emphasis here, so type PAUSE to remind you. Otherwise, I think it’s great.” He stood up and took another bite.

She quickly made the changes he suggested and read them out loud. They helped, but she needed a break.

“Is your neck still bothering you?” he asked, putting the box back in the refrigerator.

She had been unconsciously massaging her neck. “Not really, just tight from sitting here for hours.” She had been in a car accident a few months before, and her neck had taken the brunt of the impact.

He came up behind her and rubbed her shoulders. Her stomach clenched, and she let out a moan.

A Lotus for the Regent
Adonis Devereux
In Shelf
$5.99