“Holy shit!” Fi took her foot off the accelerator and looked at the water across the road ahead of her. The water didn’t look deep, but what did she know? She was a city girl, and while this wasn’t precisely the back of beyond, it was definitely not the city.

She eased the car onto the shoulder and snatched her instructions from the passenger seat beside her. “Route 94 through Brownsville. Check. Right onto Merravalley. Check. Five miles past Merravalley, right…Ah, no. Not been through Merravalley yet and no mention of water.”

A big, black SUV roared past her, straight through the water without slowing down. Fi watched. The water appeared to be only five or six inches deep. “Okay, that seems doable. Just keep driving, though likely not quite that fast.”

Fi buckled her seat belt and watched as a minivan came toward her from the other direction. It slowed a bit, then drove straight through the water. Fi stared at its wheels, but it seemed her previous guess about the depth of the water was accurate.

Fi gripped the steering wheel in a ten-to-two position, placed her four-inch platform sole on the accelerator, and pulled back onto the road. She stared at the water, entering it slowly and carefully, relieved everything seemed fine. Something white appeared in her peripheral vision and she looked to the left to see a wall of water roaring toward her.

“Holy shit!” Fi screamed, and planted her foot flat on the accelerator. “Come on, you piece of shit. Move! This is not the time to be worrying about a low carbon footprint. Let’s get out of here!”

But the compact car was not designed for a fast take-off, and it was not even halfway through the water when the tidal wave hit like a battering ram, forcing it sideways and along what had suddenly become a river.

“Steer into the skid,” Fi told herself, but her brain was screaming that there was a huge difference between a skid and a tsunami. “Come on, car, you can do it!” The engine coughed and died.

Fi peered through her windshield. She was moving sort of sideways in what appeared to be a river, where no river had been five minutes ago. Also, her feet were wet. What the hell? Fi looked at the floor of the car. Yep, water. She banged her hand on the steering wheel.

“Can’t you do anything right, car? If this was a James Bond movie, you’d float!”

The water rose inexorably over her ankles. “Okay, time for the rat to leave the sinking ship. But I’ll have you know, car, these shoes cost me two hundred dollars and I’m not happy about this.” Then Fi giggled. The car would have cost the company a lot more than two hundred dollars and her boss wasn’t going to be happy, either. Well, if Windle and Partners had bought SUVs instead of environmentally friendly small cars, likely she’d be at Merravalley already.

The water was over her calves now and there was no time to waste. Fi thrust her papers into her laptop bag and zipped it shut, slung the handle over her shoulder, pushed her head through the short strap of her purse and pressed the button to lower the window so she could crawl out of the car.

“Electric window. Of course it doesn’t work,” she chided herself and tried to open the door. It wouldn’t open. The pressure of the water was preventing it, no matter how hard she pushed. The water was almost up to her knees now.

Fi swung her legs to the side and braced her heels against the door, leaning forward to hold the catch open with her right hand. “Legs are much stronger than arms. Come on, legs!” she puffed.

The water was now level with the seat and desperation added extra strength to Fi’s efforts. She slammed her feet against the door and finally, it opened. Water rushed in as she pushed her way out.

The laptop caught around the steering wheel and Fi screamed and swore as she hauled it loose and forced her body out against the press of the water.

The river was deeper than it appeared and Fi’s four-inch platform soles scrabbled unsuccessfully for purchase on the bottom. Her long, dark-brown hair came loose from its braid and tangled around her face. Fi gulped for air and got a mouth full of water instead.

She forced herself to relax. Go with the flow, Fi, go with the flow. As her body stilled its frantic movements, she bobbed to the surface again, and was able to turn around in the direction of the torrent and look for the shore.

A man was standing on the edge of the water, yelling at her and waving his arms to attract her attention. Next to him, a cowboy was swinging a rope over his head. What’s a cowboy doing here? Her laptop was dragging her down, but no way was Fi leaving it behind. All her work files were on it. Determinedly, she swam at an angle across the current, making for the two men. It really wasn’t far, but it seemed to take forever to move even one stroke closer to the shore. Why am I so damn tired?

A rope splashed down on the water in front of her. One more solid kick with her legs, one long stretch with her right arm and she reached it. Fi grabbed it with both hands and remained upright in the water as the cowboy and his friend pulled her toward them. She ended up flat on her belly on the grass at their feet, rather like a beached whale. The waving man hauled her to her feet as gallons of water poured out of her clothes. And out of her purse and laptop bag, damn it.

“Your computer’s gonna be cactus, love. But someone’ll get your car and the mechanic should be able to get it running again.”

“That piece of shit belongs to the company, and if they hadn’t been so worried about global warming and had given me an SUV, this never would have happened.”

“Didn’t you hear? There was a landslide over at Merravalley and the river burst through to carve a new channel.”

She trailed her hand across Patrick’s back. Oh, he felt good, firm and delicious, with toned hills and valleys for her hands to navigate. Yum! Then she bent her arm backward to see what she could reach there. Ah, that sexy little dip above a man’s hipbone. So nice to slide her fingers through.

Connor pressed his cock against her butt, sliding it between the cheeks. Hmm. Something else long and hard and delicious.Oh yeah, that feels so good.

She pushed back against him, welcoming his actions, encouraging him. At the same time, she gripped Patrick’s shoulder, digging her nails in, pulling him even tighter against her body.

“Time to move this up to the next level,” said Patrick, unpeeling himself from her skin.

His cock was huge and red, a drop of pearly pre-cum already in the eye. It looked so good, and she really wanted a taste. “Let me help you with that,” Fi said, reaching toward his cock.

“Oh no. I’d go off like a geyser the minute you touched me. I want to play for a lot longer yet,” Patrick replied.

Fi swiveled and looked at Connor. Oh yeah, his cock looked more than ready for action. “How about—”

The two men flipped her flat on her back, opening her legs wide, then Patrick settled himself between her legs and laid the Purple Penis on her belly. Connor slid behind her, resting her head on his knee, holding her hands in his so she couldn’t touch anything.

Connor silenced her by covering her mouth with his. At first it was a gentle, sweet kiss, but it soon became much more carnal as his tongue delved into her mouth, teasing and tasting every inch, sliding across the roof, behind her teeth, along her cheeks, before tangling with her tongue, then sucking it deep. By the time they broke apart, Fi was gasping for breath, her heart pounding as hard as if she’d run a race.

Patrick used the opportunity to draw the Purple Penis in a line up from her bellybutton to her breasts, then around each globe, sliding under them, over them, around the nipples and across her ribs.

Fi’s breath hitched and her heart started to pound again.

Connor licked behind her ear, then gently bit her earlobe, as he raised her arms to hold both her wrists in one hand while his fingers from the other dropped to pull and tug on her nipples, rolling them, elongating them, tweaking them.

“So good. Better than good,” she murmured.

The need to come was coiling deep in her belly, lighting a fire there that only these men could quench. She pressed her breasts up into Connor’s hand, widened her legs even more, and pushed her mons up into Patrick’s touch.

He dropped the purple toy and used one hand to tease her pussy, his fingers in her channel, his thumb flicking over her clit, and the other hand to stroke around the rim of her anus.

Then she saw Patrick rolling on a condom and breathed again. In seconds, he was sliding into her pussy and she welcomed him in, the needy tissues stretching to accommodate him, her hot walls bathing him in her juices.

He gripped her hips and pulled out, then slammed into her, filling her, stretching her, touching her in all the right places.

Connor finally let her wrists go, giving them a brisk rub in case the circulation had been restricted, and placed both his hands on her breasts, palming them, rubbing them. Teasing the nipples, pulling and tugging, and pinching them until her breasts were on fire with need.

Fi was frantic with wanting to come. Her hands moved from clasping Patrick’s hips, to holding Connor’s hands, to grabbing their hair. Her brain was fried and her body on fire. Her hips slammed up to meet every one of Patrick’s thrusts and sweat was dripping from all three of them.

Fingers—she didn’t even know whose—pinched her clit and she screamed as she came and came, cream pouring from her pussy, her muscles convulsing as she shook, the heat of Patrick’s orgasm obvious even through the condom as he spasmed along with her, his final few strokes ragged and his mouth gasping for air.

Her body was still convulsing as he leaned forward and kissed her, as he pulled out and rolled off her.

Before her sex-scrambled brain could feel his loss, Connor was deep inside her, thrusting hard, tilting her hips higher to take every inch of him.

Her pussy was still rippling from her first orgasm and the aftershocks strengthened instead of dying as Connor twisted his hips, scraping his cock along her walls, filling her, nudging her sweet spot with every stroke. 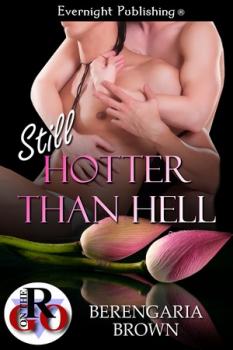