Killer in Him (MF)

Joy Lewis has just walked into a nightmare. Entering her friend’s home, Joy is met with her dead body, and the guy Joy had been renting a room to, stood over it. He'd killed her, and now, he must kill her.

Ben has broken all the rules with his latest target. Joy was a distraction and now that she is a witness, he can’t let her go. He takes her and hides her away on his island. She can scream, run, and no one will hear her. She’s trapped with him, with only the use of a diary to spill her secrets.

The attraction to Ben started long before she saw him as a killer. How can she want a man who kills people for money? Joy can’t deny her attraction. Alone together on an island, there’s no way she can keep him away for long, and what’s worse, she doesn’t want to.

Nothing can last, and even though Joy has gotten under his skin, he will not change the man he’s become. He’s a killer, and there’s no room for Joy. Their time together is coming to an end, but can their love be enough to keep them together?

Killer in Him (MF)

Charging for the door, she grabbed the handle, and that was it. Ben was on her. Before she even got a chance to open the door, he slammed his body against her back, grabbing hold of her wrist. Crying out, she tried to fight him, but he grabbed her hand, pressing it above her head. He also caught her other hand and kept it locked against the door.

“I wondered when you were going to try to be a fucking idiot,” he said. Ben growled the words against her neck, and he tightened his hold on her arms.

She cried out at the burst of pain.

Even as the pain rushed through her body, she just knew he wasn’t using his full strength. He was giving her just enough pain to be a warning, and that was it.

“I’m going to be taking you on a vacation, Joy. You’re going to have some fun—”

“And at the end of it you’re going to kill me. Why don’t you just kill me now, huh? Get it over with?” She didn’t want to die, but she also didn’t want to sit around waiting for him to strike the blade across her neck.

“Is that what you want?” His body moved closer, and he pushed his cock against her ass. Ben moaned as he did. “Or is it this that you want?”

She closed her eyes even as her body responded to his touch. Ben pushed both of her hands over her head and caught them within one of his, stretching her up. Her pussy was wet, and she hated that. Joy hated how he affected her, and she didn’t even like him. There was nothing to like, or even redeeming about him.

“You hate me, don’t you?” he asked. His hand pressed against her stomach.

Joy didn’t fight him, and it embarrassed her that she didn’t. “Yes.”

“But you want me, Joy. Your body knows what it wants.”

“And you’re a killer.” She gave her hands a little tug, and he wouldn’t let her go. Growling, she just stood there, waiting.

His hand moved down until he cupped her through her shorts, making her gasp. “This pussy, it wants me. It wants my dick, and to be fucked. I bet you’re wet for me right now. You want my dick in this nice hot pussy.” 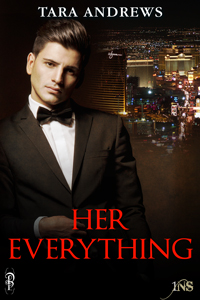 Her Everything
Tara Andrews
In Shelf
$2.99