Let the Sunshine In

Spring, 1971. Hippies, peace and love are all the rage in California. But Terri Walker has suffered a miscarriage from which she hasn’t bounced back. She and her husband move to New Orleans hoping for a fresh start. While Scott renovates the stately old home his father bequeathed to them, Terri snoops and is amazed to discover the house has a secret. Some have called it a blessing, and some a curse.

When handsome, hirsute Rafe McAllister comes into their lives, neither Scott nor Terri has any idea how much their world is about to change. Not precisely what they're looking for, Rafe might be exactly what they need. 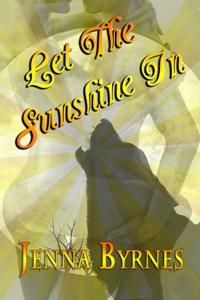 Let the Sunshine In

Scott Walker sprang up in bed, listening intently. The howling sounded as if it were right outside the bedroom balcony door.

"What's wrong?" His wife Terri rolled over and yawned sleepily.

"The howling. It sounded like a wounded animal. And it sounded close—like it was right outside the door."

Terri chuckled and brushed the hair from her face. "It's just someone's dog or cat. You know the door's locked."

Scott looked at her. She was much braver since they'd moved from Los Angeles to the outskirts of New Orleans. Glancing at the balcony door, he muttered, "I guess so. It just sounded so…painful. Like whatever it was, was in agony."

"Go check." She nodded toward the door.

"Do you think I'm crazy?" He slid under the covers and spooned his body around hers. Nestling his arms under her voluptuous breasts, he pressed into her. Terri tried not to respond, but she'd have to be dead not to feel his hard-on pressed against her ass.

Scott smiled, leaning up to examine her from the side. Even roused from sleep, in the middle of the night, she was a beauty. Tousled brown hair framed her pretty face and fell around shoulders. Two of her most attractive features, not discounting her shapely ass and large, supple breasts, were her spectacular green eyes. People often commented on how they seemed to glow.

He bent down, pressing a kiss on her cheek.

Terri patted his thigh and yawned. "It's late, Scott. I'm tired." She moved away from him, yanking the covers with her.

"Of course you are," he murmured, rolling away from her and trying to pull back enough of the sheet to cover himself.

"Don't get pissy," she spouted, allowing some of the sheet to move back his way. "There's always tomorrow."

"Okay. Night, Terri." Scott closed his eyes. By the time he awoke in the morning, she'd be gone and dressed. Terri was an early riser, always had been. She hadn't always looked for ways to avoid sex, though, that was a recent thing. It started before they'd moved cross-country and settled into the lovely old house near New Orleans.

Scott hoped getting out of California would make a difference. Unfortunate things were happening in their home state. Harsh, seemingly random crimes scared Terri and, frankly, him as well. The place overflowed with hippies and anti-war activists. While he and Terri embraced the hippy messages of peace and love, the violence was frightening.

The Manson trial was all over the news and, living in California, it was hard to get away from. The "family" members were responsible for a crime spree which left at least seven people dead. That event had shaken Terri the most. Her fear surprised Scott. His wife was usually unflappable. But the idea of innocent people being murdered in their own homes shook her to the core.

Terri suffered a miscarriage shortly after the murderers of Sharon Tate and her unborn baby were convicted. The miscarriage was hard for them both, but worse for Terri, especially when the doctor told her she might not be able to conceive again. She was devastated. After that, their sex life went down the tubes.

Scott tried to be understanding. He suggested therapy, but Terri insisted everything was fine. She gave him sex occasionally, but it wasn't the same level of passion. It was more functional and routine. He wanted desperately to discuss it with her, but her mind was closed.

Scott's father, the last of their relatives in California, passed away suddenly. He left them enough money which, if invested properly, would establish them for life. He also left them a house in New Orleans, a place Scott never knew existed. Apparently, his aunt lived here before she died. He never really knew his father's family; they lived across the country and, for some reason, kept to themselves.

Scott and Terri jumped at the opportunity for a fresh start. They moved from their apartment in Los Angeles straight into the beautiful large house just outside New Orleans.

The place was old but remarkably well maintained. Since they had money, they updated it. The kitchen especially was in need of remodeling. Scott spared no expense and gave Terri the best appliances in the newest hip shade of deep avocado green.

Lying in bed, unable to sleep, he worked out more kitchen plans in his head. He had been doing most of the work himself. It was new to him, but something he wanted to try. So far, he'd done a decent job.

Scott smiled. If the guys in his old accounting office could see him now, wielding a hammer and installing cabinets, they'd never believe it. He wasn't the athletic type. Though he was fit, his body was on the scrawny side. The kind of guy you'd see behind a desk, crunching numbers with a calculator. He'd been ready to break free of that mold, and enjoyed working on the house.

I need to get to sleep, he told himself. His hard-on had long since deflated. He wasn't sure exactly what was keeping him awake. Something had him feeling uneasy. He tried to put it out of his mind and willed himself to fall asleep. Must sleep.