Accused of killing her lecherous stepfather, Virginia is found guilty and is to hang at dawn. A stranger arrives and offers to save her on the condition she gives her life to him. He will not tell her what he wants, only that he will not hurt her and he does not own a brothel. Given a new identity, she quickly learns that if she does not do as she is told they will kill her or return her to the prison to hang. In the company of mysterious people with identities as false as hers, Virginia fears they will kill her once she has completed the task. Making matters worse, she may be falling for Rand—her savior—and she does not even know his real name. 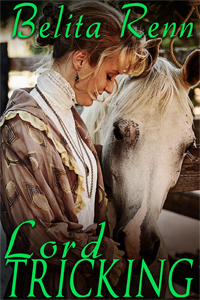 Virginia stood proudly before the waist-high railing of the prisoner’s box. The new appointed council had postponed the proceedings until the arrival of the Sheriff of London upon learning of his interest in the trial. They called it an inquiry by the House of Lords, for the truth had been much distorted, and the rules determining behavior of all parties in a trial did apply during an inquiry. Finally this day the wait was over, as all were present, and the proceedings began without further delay.

Quietly placing his hands flat on the tabletop, Sir Sommerson pushed himself upward. Standing, he rapped his knuckles gently on the tabletop, then pushed away from the table while sighing heavily. Slowly strolling around the room in silence, he glanced from Virginia to her mother. “Miss Hitchenson, you have heard the testimony of the servants. They said you were standing at the top of the stairs, your torn sleep-gown clutched within your hands, and Sir Anthony Forrest in his sleep-shirt was lying broken at the base of the stairs.”

“Cast him down she did.” A loud whisper came from the crowd.

The chamber judge slapped the tabletop before him with the palm of his hand and glared at the observers. “Silence or leave,” he commanded the group as a whole. He then nodded to Sommerson. “Continue.”

“Do you now wish to change your testimony? Would you care to liberate your soul and admit that you pushed Sir Anthony Forrest, causing his person to fall down the stairs leading to the second landing—a fall in which his neck was broken and head battered—causing his death? Will you now admit that to be a correct version of the happenings, Miss Hitchenson?” Sommerson demanded with a piercing glare fixed on Virginia.

“I do not—my mother’s husband attacked me.” She feared looking at her mother now. No one would believe a gentleman would wish to attack or rape her. She was a shadow of her normally neat person. “He slipped and fell. He clutched at my gown for support to stop his fall and it ripped. He fell. There was nothing I could do to prevent it.”

“I recall you mentioned being attacked, but you appear to be the one unharmed in this situation,” Sir Sommerson stated in a distracted tone, looking down at his fingertips on the table before him. “Was there a struggle before he slipped?”

The lack of accusation in Patrick’s tone fostered no ease in Virginia’s mind. Being a former friend of her father’s, Sir Sommerson would try all the harder to show no leniency for her predicament. He would not permit anyone to assume he allowed sentiment to cloud his judgment.

“A little, yes. Mostly he was trying to drag me back to my bedchamber, and I was resisting.”

Resuming his seat, Sommerson and the gentlemen conversed quietly back and forth across the table before nodding in agreement and settling back into their respective seats. “I can abide this smell no longer. Let’s end this and talk in private,” Virginia heard Williamsbe whisper to the gentlemen at the table. No one would dare complain to the Sheriff of London that he was in need of a bath after his long journey. The sheriff sat immediately behind them. Sommerson and Slantes agreed a private consultation would be best.

“You will return to your chambers and wait for our final decision,” Lord Sommerson ordered.

She was forced to wait a full day before being presented before the chamber judge and jury of three. Virginia’s mother and the crowd of watchers were not allowed to attend the hearing this time. It was obvious that no one knew of the meeting, as it was late at night, and the chamber was empty of observers. Feelings of dread mounted in her chest as she was escorted to the prisoner’s box by two guards. There was only one reason the meeting would be held in secret. The council members did not wish anyone to protest their decision. Her mouth dry as dust, she struggled to swallow the lump strangling her.

The chamber judge looked down at her from the perch behind the high desk. “Virginia Hitchenson, you have been found guilty of illegally ending a man’s life. You will wait in your chamber until a gallows can be made ready to end your life by hanging on the morn next at the dawn.”

Virginia stared at him without comprehension. Somewhere deep inside she had not believed it possible that these men would decree the end of her life.

As she dropped her gaze to Patrick Sommerson, an old family friend, the resentment she read in his gaze made it all too real. She wanted to spit in his face, for the vote had to be undisputed by the Board for a death decree.

She looked Sir Sommerson in the eyes as he was walking past the box where she must remain until the guard came for her. He paused and shifted accusing brown eyes to her face. “I have to wonder if your father’s death was an accident, now that this supposed accident has taken place.” His tone was as icy and unforgiving as his eyes.

She spit then, the water hitting him in the center of his craggy face. It splattered his nose and upper lip. The stunned look upon his face was a barrage of vindication. She felt a moment of exhilaration, and then the mighty fist of the guard landed on the back of her head.

The Contract (MF)
Raven McAllan
In Shelf
$2.99
Tweets by
sirenbookstrand