Madison Avery, a divorcee nearing forty, is hesitant to get back into the dating scene until she meets David Mayers, a much younger man, through an online dating site. He is kind of on the nerdy side, but she doesn’t mind. However, there is one problem—David is a devout “mama’s boy,” who still lives with his overbearing mother while he goes to college.

At first, she doesn’t feel this is a deal breaker, especially since her ex was a bit of a “mama’s boy” himself with an overbearing mother of his own. But then she has a nasty first meeting with David’s mother, Debbie, and she begins to wonder if their relationship is worth the trouble, especially given their age difference. However, Madison discovers she has true feelings for David.

Will she find a way they can be together in spite of his overbearing mother and make him cut the apron strings once and for all?

“David,” she cooed, “have you ever made love to a woman before?”

David was taken aback by her question. At first, he didn’t want to answer her, but then he glanced away and gave a terse shake of his head. Feeling emboldened, she drew her face closer to his and said in an even sultrier tone, “Would you like to make love to me?”

“Please say yes,” she said to him, her face so close to his he could feel her warm breath hitting his face.

Before he realized what he was saying, he muttered, “Y–yes.”

She grinned widely at him. “Good boy!”

She stepped away from him and pointed in front of her. “Go stand over there.”

“Were you honest with me that you’ve never been with a woman, David?” she pressed him.

He blushed yet again and nodded his head.

“That’s okay, sweetie.” She rubbed her hand across his sturdy chest. “Everyone’s a virgin.” She kissed his cheek. “Once.”

Madison stepped in front of David and admired his body for a moment while she held his hands in hers. She walked closer toward him until her breasts were pressing up against his chest. She wrapped her left hand around his shoulder while she cupped his expanding bulge with her right hand.

“Mmmm,” she cooed, grinning wickedly as she felt him up. “That’s nice.” She leaned her head closer to his and half-whispered in his ear, “That’s real nice!”

By now, David was so embarrassed and red-faced that he couldn’t even bring himself to look her in the eye the way he did back at the restaurant, which only seemed to egg Madison on all the more as she rubbed his bulge that much harder. She moaned into his ear as she felt his cock growing inside his jeans under her palm.

“Have you ever had your cock sucked before, David?” she said to him teasingly as she already knew to answer to that question. Then, before he had a chance to answer, she answered for him, “What am I saying? Of course you haven’t!”

That made him blush even more, which Madison thought wasn’t even possible.

“Do you mind if I suck your cock, David? Hmmm?” Again, before he could answer her, she said, “I know you don’t. Do you?”

He silently and tersely nodded his head, still not looking at her. With that, she unbuttoned the top button of his jeans and slowly unzipped them. She giggled as she reached inside and cupped his impressive package in her hand over his boxers.

“Mmmm, David,” she moaned in his ear. “I’m getting so turned on right now! Are you getting turned on?” He didn’t answer as she gripped him harder. “Oh, yeah, you are!”

She let him go and slipped the tips of her fingers into the very top of his boxers. She slowly ran her fingers through his bushy pubic hair and stopped when she was barely touching the base of his thick penis. She gently pulled on his pubic hair for a bit, eliciting a few moans from David. Madison giggled again at how she was getting to him. She slid her fingers farther down and wrapped her hand around the base of his cock. 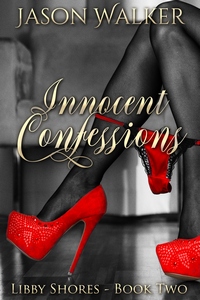 The Socialite
Jason Walker
In Shelf
$1.99