The night Madison is attacked, a mysterious man steps from the shadows and rescues her. He stays in the darkness and doesn't even tell her his name.

Keaton can't keep Madison from his thoughts. Once he touched her he knew she was his mate. He has to see her again and wraps her in shadow to whisk her away.

Once the cold of his power touches her, it ignites the mating fever.

All Madi desires is to be with Keaton because any separation from him brings pain. Madison doesn't fully understand what is happening only that the fever burns in her body and she can't keep her hands off Keaton. As the fever burns, so do the feelings between them. However, there is one who would stand in their way. An old enemy has resurfaced and Keaton will stop at nothing to protect Madison even if it means sacrificing his very existence for the woman he loves.

Crymsyn Hart does it again with excellent writing in her story telling with the dark side of this Urban Fantasy/Paranormal tale. The creativity of the dark side of vampires still lives among the humans though some may have succumb to a more gentle side of life without the gory kill of hunting prey.

In this world, Madi, a human female has a life full of darkness all around her but strives to live day to day until one day she is saved from a mugging by one of the creatures of the dark “Keaton”, a creature who brings her darkness into light as he reveals to her that she is his destined mate.

However, there is more to her than what meets the eye for she is a human that can draw in the dark forces within her and can block out the mind melding and control of other dark creatures.

This is one story that will grab your interest by the second page as Crymsyn gives us a view of what it’s like to live on the dark side and to add to it, the erotica scenes are hot.

“Please don’t hurt me.” I hated the helplessness in my voice. All my muscles were locked in place, frozen in fear at what he would do to me. The worst rolled through my mind. Rape. Murder. Being chopped up and my body dumped into the Charles River.

“Don’t worry. It’ll only hurt for a minute. Then you’ll be one of us.” He wrenched my head to the side. A cry let loose from my lips. His fingers wound through my hair and he pulled out the scarf I wore. My mugger pressed his body against mine. He had no other weapon I could see, but I was trapped. His hot, stinking breath moistened my skin.

“Your kind has got to learn.” Another deep voice rumbled in the alley.

I opened my eyes and felt the man’s lips move away from my throat.

“My master doesn’t obey the laws. Humans are meat,” he snarled.

A guttural growl answered him. “Trenton knows better. His day will come. As yours has now.”

My attacker launched himself off me, pushing me into the wall so my head struck the brick exterior. The world grew a fuzzy around the edges. I tried to move, but my head spun. All I could do was listen to the two men fight next to me. Whoever had come into the alley heaved my attacker into the trashcans and was on top of him, holding him down. My savior raised his arm over his head. There was something large and pointed in his hand that he brought down. A sharp shriek pierced the night that chilled my bones. The scream died as a blast of wind hit me. Then silence.

The world started to return to normal. I was able to stand without the aid of the wall. I rubbed my throat, but my neck hurt from the tight grip. My hero approached. The light next to the alleyway flickered on and off so it was difficult to see. All I could make out was that he was dressed in dark jeans and a fitted t-shirt. His hair was disheveled with strands hanging over his ear. He didn’t seem out of breath, but there were dark spatters on his cheek I could only assume were blood.

“May I check?” He reached for my neck, but I backed away.

“I’m fine. Thank you for your help.” I pulled out my phone, ready to call the cops.

“Why not? I was attacked. Of course I’m going to report it.” I walked closer to the light to get a better look at my phone and to feel a little safer. He stepped in front of me.

“Please don’t.” His tone was firmer. I glanced back at him, and his eyes glowed in the light.

My head grew a little fuzzy, but I shook off the feeling and attributed it to hitting the brick wall. “Sorry. But you’re not the boss of me.” I dialed the police and waited for the operator to answer.

“I wish you hadn’t done that.”

The man rushed forward, plucked the phone from my fingers, and crushed it in his hand. What the hell? That isn’t normal. No person moved that fast unless I am really out of it.

“Hey, what did you do that for?” I stood transfixed. Fear trembled my spine as I watched him sprinkle the remains of my phone onto the pavement.

I backed away from the crazed man, hoped to make it to the front of the package store, and then inside so I could have the clerk call the police. I kept my gaze locked on him. Then he disappeared. A breeze brushed past me. Someone clutched my arms from behind. I jumped.

“I won’t hurt you, but you have to listen to me very carefully.”

A low chuckle echoed in the darkness. “Nothing. Just that if you tell anyone about what you’ve seen tonight, I’ll be forced to come back. Then you will know what I can do to you.”

He pressed his lips to my throat. The wetness of his tongue trailed along my flesh. A warm tingle spread from the spot and all along my body. I shouldn’t have been reacting to him this way, but I couldn’t help it. I bit my lip to keep from moaning. Conflicting emotions assailed me. I walked a line between fear and the stirred passion that he had awakened in me. 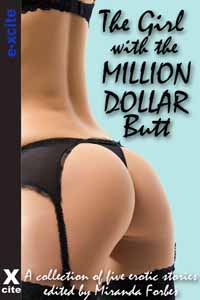 The Girl With The Million Dollar Butt
Miranda Forbes
In Shelf
$4.59