A grandchild or no trust fund.

Sabrina Gibson thought she was saved when her sister found her stud to fulfill their parents' ultimatum. Then her parents got greedy.

As a practical accountant, Sabrina understands facts and figures. A man to give her a baby is the one thing that isn’t computing in her life. Then she meets Brody Holt. Confident, dominant, and sex personified, he sends her on a whirlwind of panty-wetting lust that defies all sensible thoughts or dreams of happily ever after.

He agrees to help her, but his stipulation borders on blackmail. Worse, the cocky cowboy won’t divulge his reasons for agreeing to be her "stud." Her only hope lies in the terms they set for the agreement. But how will she be able to walk away then with her heart intact?

Heat Rating: Sextreme
Word Count: 40,610
23 Ratings (4.0)
Contemporary Western/Cowboys
In Bookshelf
In Cart
In Wish List
Available formats
PDF
HTML
Mobi
ePub
Cover Art by Jinger Heaston
Reviews
She's got her life all mapped out, all organized, all worked out to the last decimal point. But her folks want another grandchild and that means she comes up with one or not trust fund. He's hunky and alpha to the core, willing to supply the daddy part of the equation, but he has his own demands. As always, Tonya Ramagos writes a story that is filled with life-sized characters and people who resonate with readers--possibly not with the circumstances particularly, but definitely with feelings and struggles. It is a romantic and erotic love story that will grab the reader from word one, and will finally turn out to be another Ramagos triumph.
Dr. J
Read more...

“Good morning, and welcome to Walmart.”

Sabrina stopped at the podium and grinned at the short, plump greeter with gray curls and spectacles perched on the end of her nose. “Betsy, I bet you sure get tired of saying that all day.”

Betsy returned Sabrina’s grin with one of her own. “About as much as you get tired of saying ‘would you like a coupon?’ when business is slow.”

Sabrina let out a dramatic sigh. “I’ve been saying it in my sleep for the last three months.”

“Don’t despair, sweetie. It looks like you will have something else to say for at least a few minutes this morning.” Betsy tipped her head toward Sabrina’s kiosk and leaned closer to whisper, “He’s been waiting for close to an hour. He walked by a couple of times and finally took up post. If I were you, I’d take my time doing that man’s taxes.”

Sabrina laughed and started walking. “I just might,” she shot over her shoulder. She gladly welcomed any client that made even ten minutes of her time go by faster. Still grinning, she turned her head and locked gazes with a pair of dark eyes potent enough to make her step falter as spasms of lust ricocheted through her insides.

Jiminy Cricket, the man is hot!

Shocked by her body’s immediate do-me reaction, she dropped her gaze to his feet. Worn didn’t begin to describe the pair of black boots he wore seemingly held together in places by duct tape, of all things. She chewed the inside of her bottom lip as she skimmed her attention up stupendously tight, well-worn Wranglers and corded muscles unhidden by a plain cotton T-shirt. The hint of a tattoo peeking from beneath his left sleeve made her tongue tingle. Broad shoulders held a wide neck perfect for latching onto, and her palms itched to do just that.

Sabrina snapped her gaze back to his face, noting his roughened, handsome features even as his tone set her warning bells chiming. Laughter lines etched the tanned flesh around his mouth and eyes. Strands of straight, dark hair flirted with his shoulders from beneath a black Stetson nearly as worn-looking as his boots and jeans. She stopped short of invading his personal space and knew in an instant even ten feet wouldn’t be a safe distance from this man.

The laughter lines did little to make his scowl any more chipper. “You were supposed to be here an hour ago.”

Sabrina glanced at the sign he pointed to attached to the outer wall of her kiosk office and stifled a growl. Damn it. Damn it. Damn it! She’d told Rita to change the hours sign before she left the previous evening.

“I apologize for any inconvenience. If you can give me five minutes to get the computers set up, I will be happy assist you.” She reached for the chain closing off the doorway into the two-desk kiosk, and her fingers inadvertently brushed his forearm. Awareness, swift and panty-wetting, zinged through her system.

“I don’t have anything with me.” He folded his arms and widened his stance, more effectively blocking her way into her kiosk and making himself look like a poster cowboy for alpha-male Wrangler stud.

Sabrina curled her fingers around the hook of the chain like a lifeline to keep her grounded to the unforgiving concrete of the Walmart floor. Merely being the object of this man’s attention made her imagination soar. Ecstasy, hot and intoxicating, pumped off him in waves. She wondered if he realized it, if he somehow did it on purpose.

“Then you must have questions you need answered.”

“A truckload of them,” he grumbled.

Sabrina nodded once, both to indicate she could help him and in an attempt to jar her mind from the quick plane to stud-land it seemed insistent on boarding. “That’s not a problem. If you can give me five—”

“You can’t answer them here.”

Sabrina blinked and let her hand fall to her side. “I beg your pardon?”

“You’ve already done that once, darlin’. There’s no need to beg.” He shot a pointed glance around, then pinned her with a stare that put in her mind a vision of sweaty bodies and rumpled sheets. “At least not here in the store.

“I can’t promise my hands will come back up if I let them drop.” Arousal turned his voice gravelly. It grated over her sensitive flesh, teasing nerve endings and exciting erogenous zones she didn’t know she possessed.

Sabrina angled her head, tilted it back to look at him, and met his gaze. His dark eyes swam with a predatory desire that thrilled her to her toes. “I’m counting on it.”

Still, his hands stayed put, his fingers working her tight muscles in slow circles as he stared back at her. Another full minute that felt like an eternity passed before his hands began to slide. His calloused palms rasped over the bare flesh of her chest on a direct course to her breasts. He paused, his fingertips touching the surface of the water, the swell of her breasts, and hesitated there for so long she thought he might change his mind after all.

“You’re sure?” The potent need swirling in his eyes made her surprised he gave her a choice.

Breath lodged in her throat, Sabrina could only nod her answer. She licked her lips, tried to speak, but lost the urge when his hands made that final slide down beneath the water to cup her breasts.

“Mmm,” she purred as his hands covered her fully. He squeezed and then continued the massage he had been giving her shoulders, only now to the sensitive orbs burning for his attention.

Sabrina rocked her lower body back, wanting to feel the hardness of his erection against her flesh, delighting in the low growl that rumbled from his throat. His eyes sparked, the animal she sensed inside him realizing he caught his prey, and she didn’t get another second to think before he crushed his mouth to hers.

Unlike the kiss they shared in the office of the main house yesterday, there was nothing tender or coaxing about the way he took her mouth this time. White-hot hunger seared through her as he devoured her, controlled her, and stole her sanity through her mouth. One hand stayed to torment her breast as the other skimmed lower.

Sabrina moaned into his mouth when his hand closed over her pussy, one finger inching between her folds. He raked that fingertip over her clit, and she bucked her hips, groped for something to hold onto, and found his thighs. He broke the kiss in favor of licking his way over her jaw, nipping her jawbone, and continuing on to the side of her neck. She couldn’t keep up. The sensations ricocheting through her proved too much. His mouth worked her neck, teeth grazing and biting. His hand weighed and caressed her breast, the thumb and forefinger finding her nipple to add further torture. His finger pushed on her clit, a delicious pressure that set her boiling, and abandoned the aching bud to thrust inside her weeping channel.

“Oh, God, Brody, yes.” A second finger joined the first, and she rocked her hips in time with his thrusts, wanting it deeper, needing to feel the rigid erection pressing against her back inside her body. “Please.”

“Jesus, you’re wet.” His hot breath against her neck sent excited shivers raining through her. “I figured the water would keep you from getting wet for me. Your pussy is so tight, Sabrina. It’s primed and ready. Your muscles are gripping my fingers.”

He thrust his fingers deeper, lifting her and pulling her more firmly against him. Her knees went weak, but it didn’t matter. He held her, controlled her, and possessed her. His teeth raked the sensitized flesh where her neck and shoulder met, and she sucked in a breath as slivers of demonic lust spiked to her core.

“Brody.” Her head fell back on his chest and whipped from side to side as she fought to breathe. Her body yielded to his manipulations. Pressure built in her womb. She wanted more, needed to be filled by the thick shaft resting against her back.

“Come for me, Sabrina.” The order came in a gruff whisper that bordered an animalistic growl as he raked his thumb over her clit in time with the thrusts of his fingers inside her channel. “I want to feel you shatter.” 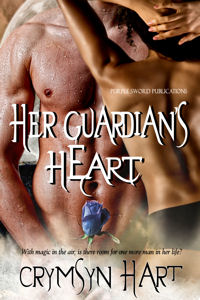