When Melody Forbes butts heads with Reese Torrin at a hockey game, the last thing she expects is to be pinned against a wall, breathless, hot and needy less than twelve hours later. The man's an asshole! But he's the only one around when her life takes one devastating turn after another. She isn't looking for a relationship, but casual, no strings, no promises sex, now that's something she can handle. Then things start to change.

Reese doesn't believe in love but one look at Melody has him wondering if he's wrong. The woman is hot! She's also the sister of a close friend. He should keep his hands off her but when she literally jumps him, demanding he take her, how can he be expected to say no? And when she reaches a part of him that no woman has ever touched before, how can he be expected to walk away?

This title has been previously published but has been extensively revised.

Heat Rating: Scorching
Word Count: 53,313
17 Ratings (4.3)
Contemporary
In Bookshelf
In Cart
In Wish List
Available formats
PDF
HTML
Mobi
ePub
Cover Art by Jinger Heaston
Professional Reviews
5 CUPIDS: "Sports Beats keeps the high level of writing expected from Ms. Ramagos. Sports Beats definitely bats a thousand or should I say shoots a thousand. This book has a little more drama than the previous two. Because of this I feel the characters are more well-rounded. As with all of the heroes you initially cannot comprehend trusting and loving a musician who is sexy, popular, and carries a past full of women and wild times, but Ms. Ramagos has made all three thus far wholly loveable and trustworthy yet she does not emasculate them or make their change in lifestyle unrealistic or forced. I am anxious for the next installment in this series because a bit of mystery surrounds it and a new band member is introduced fully." -- Cupid's Library Reviews
5 CHERRIES: "Ms. Ramagos writes a compelling, yet fun novella. I couldn't put this story down. The connections to pop culture and the hockey angle made the story resonate with me. And who wouldn't want to meet a sex god, rock idol? I liked that Ms. Ramagos didn't make the heroine, Melody out to be a groupie. She gave the character her own strong identity, but also added dimensions to her that made her soft and relatable...And the sex scenes! Very hot! I felt like I was really right there with them! If you want a great, sexy story tinged with sports, rock and roll and a lot of heart, then you want Sports Beats, Rock Hard Seduction. You won't be disappointed!" -- Tiger Lily, Whipped Cream Reviews
4.5 STARS: "Sports Beats by Tonya Ramagos is an electrifying dance into the sweet side of seduction. Ms. Ramagos has created another contemporary romance that defies the typical mold and delivers an amazing love story with plenty of fresh excitement and heart tugging moments. Ms. Ramagos proves yet again that contemporary romance does not have to follow the same old tired formula to be an astounding success. Congratulations on another fine masterpiece." -- eCata Romance
4 ANGELS: "As in the previous books about the heavy metal band Faade, Tonya Ramagos brings these characters to life. Sports Beats showcases the fact that Reese has a life outside of the band. He and Melody are like oil and water. Both have strong personalities and needs, making for some very intense encounters. Unusual circumstances force them together so finally they begin to realize that they have feelings for each other. If they can both work through their insecurities, they may just realize they have something worth keeping. This well paced story had me hooked right from the beginning with its well rounded, realistic characters and the almost electrical attraction between Reese and Melody. Although it's not necessary, if you've read the previous stories, you won't want to miss Sports Beats." -- Trang, Fallen Angel Reviews
4 CUPS: "Ms. Ramagos has crafted a well-written and exciting contemporary romance with Reese and Melody's story. The emotional and sexual tensions are so tight you expect them to break several times during the book, which just made it that much more enjoyable to read. The characters are well developed and real, as well as being easy to relate to. In addition, the situations posed within the plot are probable and lend to the reality of this piece. I highly recommend this book." -- Regina, Coffeetime Romance
"While Sports Beats can be enjoyed without having read the previous books in this series, I highly recommend that you obtain the other two books. The entire series is guaranteed to warm your heart and raise your body temperature with out of this world love scenes and truly unique characters." -- Keeley, eCata Romance
"Tonya Ramagos has given us another pair of very realistic characters, and charged the atmosphere with an odd but mutual attraction between two people who love a hockey team, and are joined by friendship and relationship to the team center. Sports Beats is a passionate romp in love at first sight mistaken for just a case of simple lust, with a touch of domination and submission on the side. Sports Beats is the third book in this fascinating series. Tonya brings you the pain of a diagnosis of Alzheimer's on a family, the rocky road to a true love, and the hot steamy love scenes that blend the whole together in a poignant yet most delightfully hot and sexy way." -- Rose, Romance at Heart
"Sports Beats was a great contribution to Tonya Ramagos series! Melody is a sexy and beautiful woman who has shut off her emotional self because she has all she can handle with her family. Reese is a good guy who simply does not believe in love. He cares for and enjoys his friends and does not begrudge their relationships, he just knows there is not someone out there for him. I enjoyed watching Reese and Melody interact and it is always so much fun to get a glimpse into past friend's lives. Tonya Ramagos knows how to write strong, sexy, and irresistible characters that run the emotional gamut!! I love Tonya Ramagos and Sports Beats is another great addition to her series and I can hardly wait for the next one!" -- Joyfully Reviewed
Read more 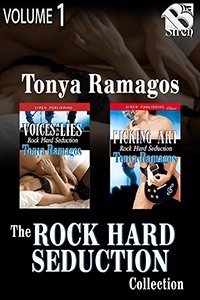 Melody could've stopped him. She could've turned her head, could've pulled herself out of his arms and stepped away. She saw his gaze drop to her mouth, saw the heat and intention in his eyes, and it paralyzed her. He cupped her cheek in his calloused palm, his thumb lightly brushing away her tears. She closed her eyes and nearly melted as his lips touched hers.

It began as a soft caress of skin brushing skin, his mustache lightly tickling her upper lip. Then she felt the warm moisture of his tongue as he licked, urging her to allow him access.

She sighed, a hopeless, helpless, needy sound she couldn't control, and parted her lips, inviting him inside.

His tongue swept into her mouth and high-velocity tingles exploded throughout her body. Dear God, had a kiss ever felt so good? Their tongues tangled, danced, retreated and came back for more. The hairs on his upper lip and chin bristled against her smooth skin as the kiss grew hotter, boiling with passion and longing. All thoughts of the night she'd had, of the events that had led her here vanished in the wonderment of the moment. She was melting in Reese Torrin's arms and, oh, the places they could go. She wanted so much, needed even more. The things he could do to her defied explanation: but not her imagination.

Her inner thighs sizzled, anticipating the feel of his facial stubble to her sensitized flesh. Wetness pooled in her core, slowly seeping through her folds, soaking her panties. She moved into him, even as his arm tightened around her waist, and pressed her body to his. Her hand fisted in the back of his hair as his mouth left hers to trail warm, wet kisses down her face and throat.

Her head lolled back and her right leg eased around his until his thick, muscled thigh was between her legs. She gyrated against him, the rough denim of her jeans pressing her soaked panties between her folds. His thigh moved with her, offering a gentle pressure that nearly drove her mad. She moaned and a quiet, "Oh yeah," escaped her lips before he captured them again.

He pushed against her, stepping her backward until her she was pressed against a wall. He continued to ravage her mouth, his hands moving to the bottom of her hockey jersey. A blast of cool air hit her midriff as he slowly lifted the shirt, exposing skin that screamed for his touch. He broke the kiss, continuing his upward pull, and her arms rose obediently above her head. Instead of removing the jersey, he stopped. The neckline caught just under her nose and she smiled. She was blinded by the fabric covering her eyes, her arms bound by the sleeves on either side of her head. A trickle of fear danced down her spine. It was disconcerting, maddening and wondrously hot.

With her sight cut off, her sense of feel became predominate. His breath heated her tingling lips and she waited for another kiss that didn't come. Instead, she felt the soft graze of his fingertip over her cheek, her lips, her chin, down her neck, and across the outline of her bra. He touched her with such surprising softness. It was torture of the sweetest kind, tantalizing her skin, electrifying her senses. Despite her present blindness, she closed her eyes and concentrated on that touch. His finger dipped into the valley between her breasts to the clasp of her bra and she shivered. Her nipples tightened, hardening almost to the point of pain, longing for his touch, his mouth, his tongue and, oh yes, here it came.

He unfastened the clasp and her breasts spilled free. The man was, no doubt, experienced in undressing a woman. Not many could manage to undo a bra's tiny clasp one-handed, but he'd done it. She sensed more than felt him bend. He held her, both the jersey and her wrists suspended above her head, in one of his large hands.

Slowly, so dammed slowly she wanted to scream at him to move faster, he released her breast to trail a finger down her abs and stomach to the button of her jeans. She wanted to help him, to speed things up. She tried. His grip tightened on her wrists, stopping her. Control belonged to him and he let her know it. He'd blindfolded and bound her and now her body was his to do with what he chose. The realization had her pleading.

"Please, Reese," she cried on a ragged breath.

"Please what, Melody?" He stole another bite of her nipple.

She sucked in a breath. Blazing fire coursed through her. "I want..."

"You want what, Melody?" Another bite, this time to her other nipple. "Tell me what you want, baby."

"I want you inside me." She couldn't stand it. Her nipples were so hard they hurt, the lingering sensations of his bites throbbing in time with her needy pussy.

She felt him straighten then he nestled his lips against her ear. "What do you want inside you?" he whispered and she could tell by the sound of his voice that he was struggling to preserve his own control.

"Your tongue, your fingers, ah God, your cock."

She felt the waistband of her jeans loosen as he finally undid the button. She whimpered with relief. He lowered the zipper, his hand moving inside her pants, inside her panties, at the same time.