In the darkness of my mind, just before release, I see stars so very far away, stars I should have touched and held and captured, stars I abandoned by signing on as a working girl at Robby’s Chattel in Nevada.

Anne lazes through her Wednesday until a handsome guy with a thing for weird names and a whole bunch of scars comes in for a romp at the Chattel brothel. She’s in no mood for work, and he surprises her by only wanting to be held. She wants more, much more than she realizes at first. Everyone wants something special. Even a working girl wants to be loved. The guy with a new name every week wants something too, but forever is a scary thing, and the stars he reaches for burned out a long time ago. 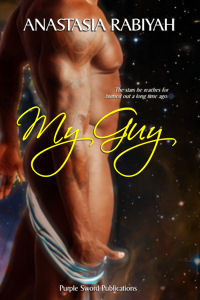 Last Guy stood and strode toward me, his gaze set. He’d made his choice and I was it.

It was as simple as that. I slipped my hand in his and we started down the hall, walking together in time as if we’d always done so.

“You got a name?” I asked outside my door.

He smirked. His eyes roved over my shape, pausing at my breasts. “Call me Uriel.”

“Nice to meet you. I’m Anne.” I nodded, opened the door, and stepped inside. Some girls get down to business right away. Others, like me, well, we like to play around a little first, kinda get to know the guys. Plus, I needed a warm up. Like I said, I was feeling lazy.

I seated myself on the bed and crossed my legs, not that he’d be impressed by that. “You don’t look like a Uriel.”

He shrugged, his mouth curling on one side, telling me it didn’t matter one way or the other what I called him. He glanced around my room, no doubt taking in the sex toys on the dresser and the fun chair I had in the corner. I wondered what he’d be into. Some guys are a surprise; some like to do it the same way every time. He sighed and started to unbutton his shirt.

“You want some help with that?”

“Not this time. Maybe next time.”

He wasn’t a talkative guy. “One of those men of action, are you?”

“You could say that.” He worked the last three buttons.

“Going straight to business?” I held in my disappointment. I wanted to make out for a while first. Free stuff like that. Maybe I was getting too old for the business. It wears on a person, makes her want for a different life, for some predictability, and a guy that stays. Maybe I just thought this Uriel guy was hot, and I wanted to enjoy it.

Damn. Holders came around a lot. Not that there’s anything wrong with that, but it spoke of a big, black hole of loneliness. Most times they wanted to tell me all their problems, like a whore in a fancy brothel is a shrink or something.

He grasped his chin, his dark eyes deepening in thought. “All night, unless you have somewhere else to be.”

“Let’s see. It’s a little after noon.” I calculated the rate for something so silly. It wasn’t much. I could make more for kinkier stuff if I let this guy off and went back to the line-up. “Holding,” I muttered. Truth is, I needed holding too. I told him the fee.

He nodded and pulled a wad of cash from his back pocket.

I took it, turned and discreetly counted it before dropping it into the canister and pressing send. Robby likes the money up front. Less problems that way, especially with cash.

I faced Uriel and pursed my lips when he pulled off his shirt. He tossed it away where it landed half on the fun chair. A thick scar ran over his chiseled chest, just a few inches from his heart. He had more, so many more scars. Some looked like claw marks.

He stifled a chuckle. “You could say that.” Uriel went back to work, unbuttoning his black pants and sliding them over his thick muscled legs. He wore red boxers that didn’t do much to hide the bulging treasure inside.

He kicked off his shoes and threw his pants at the chair. “The scars bother you?”

“No, not really.” I held my ground when he stopped and placed both hands on my shoulders, his face alight with an emotion I knew too well, one I tried to hide way back in the recesses of my heart: sorrow.

Uriel swiped one hand over my cheek and cupped my face with his palm, his thumb resting on my lower lip. His cock was wide awake and jutting into my abdomen, ready and willing though his mind didn’t seem to think he needed more. He stood there, quiet and contemplative, and just…held me.