Even after seeing Luke find his mate, Nathan isn’t sure he has one. They’ve been engineered in the same lab and spent the first years of their lives together, but they’re different, and Nathan knows it might mean there’s no one out there for him. But even if there was, he’s only nineteen, too young for any kind of serious relationship, even though his best friends are both happy with their mates.

Felix is half-demon, and he doesn’t have a mate. It’s not like he wants one, but he wishes his mother would stop throwing full-blooded demons at him in the hopes that he’d pick one and marry him. He’s not sure why she’s doing it, but he’s had just about enough.

When Felix and Nathan meet, Felix is elated—and Nathan runs. Their relationship isn’t the only thing they have to learn to navigate, though. Felix’s mother is still trying to get him to marry a demon, and there’s a new drug in town, one that has a devastating effect on shifters. Will they be able to make it through, or will the pressures on their budding relationship be the end of it? 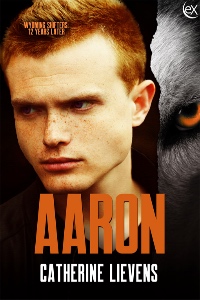 Nathan huffed and checked his hair in the rearview mirror of his car. The fact that he was at the club alone didn’t mean he had to look sloppy. He might not have found his mate like Hugo and Sterling had, but he still could. Every night was good to meet his mate, right? And who knew, his mate might like to dance as much as he did.

Besides, it wasn’t like Nathan actually wanted to meet his mate. He was only nineteen, and while neither Hugo nor Sterling were much older than he was, their situations were different. Hugo was a dad, while Sterling had just lost his parents and was acting like a parent for his siblings. They’d both needed to meet their mates, so they had.

Nathan didn’t need to. He was okay on his own. Hell, he didn’t even think he had a mate. Luke might have found his, but even though they’d been made in the same lab, they weren’t the same. Their genes had been manipulated in similar ways, but Nathan had always been softer, less prone to violence. That meant they were different, which in turn meant Nathan might not have anyone waiting to meet him out there. And that was fine with him—most of the time.

Shaking his head, he redid his eyeliner, just to be on the safe side, and finally left his car. He made his way toward the club, smiling at the sound of the music he could hear even from outside. It was like the walls were bouncing, calling out to him. He was going to have fun. He might not usually go dancing alone, but he could. He wouldn’t be in danger. He didn’t have to worry.

He snorted softly, wondering who he thought he was fooling. Of course he was worried. He might be stronger than most of the people inside the club, but that didn’t mean someone couldn’t get the drop on him. He’d be careful, though, and this club was safe enough. He’d never heard of anything weird happening there.

He grinned at the bouncer when he got at the door. Ray rolled his eyes and waved Nathan forward. Nathan ignored the protests of the people waiting in line and sauntered ahead, stopping next to Ray to give him a kiss on the cheek. Ray laughed and pushed him away. “Stop that. You’re going to make my boyfriend jealous.”

Nathan arched a brow. “Boyfriend, huh? Don’t you mean flavor of the week?”

“None of your business. Where are your sidekicks tonight?”

And there went Nathan’s good mood. “At home, I guess. With their mates and their family.”

“I see I touched a nerve. Go on, Nate. Get something to drink and try to forget about your sorrows.”

Nathan rolled his eyes. “Sorrows? Please. As if I’d want to be stuck with someone at my age.”

Nathan decided it would be safer for his sanity to leave Ray to his job. He slipped into the club, relaxing at the familiar sights, smells, and sounds. Hugo and Sterling might not be with him, but that didn’t mean he couldn’t enjoy himself. He’d dance for a bit, maybe find someone to fuck in the bathroom, then he’d go home and sleep. And tomorrow he’d meet up with his best friends for brunch and hopefully have a lot to tease them with. He doubted they missed sex with strangers, since they both lived with their mates, but Nathan was pretty sure there was a big difference between having sex with your mate and having sex with a guy you just met. Something told him that doing it with your mate would be better, but he didn't want to think about that too deeply, so he pushed away those thoughts and went to get himself a drink.

He could feel eyes on him as he moved toward the bar, and he smiled at himself. Yep, this was the life. Who wanted to be stuck at home with a baby on a Saturday night, right?

He downed his drink, smiled at the bartender, then finally turned to take a look at what the night offered. The club was full, bodies writhing and humping each other everywhere, the darkness giving them enough leeway that Nathan was pretty sure a few of them were actually fucking. Not that he cared. He wasn’t one for exhibitionism, but if that was what rocked people’s world, then who was he to say anything?

It was time to dance.

Nathan stepped onto the dancefloor, moving his hips and his arms to the rhythm of the song playing. It was easy to forget about Hugo and Sterling being disgustingly happy—and Nathan being disgustingly jealous of them. He hated himself for even feeling that. Sterling had just lost his parents, for fuck’s sake, and Hugo was a dad at twenty. What was there to be jealous of? So Nathan stopped thinking about it and focused on his body, and on the bodies around him.

He smiled when an arm wrapped around his waist from behind. He pressed back and tilted his head to look, his smile widening at the sight that greeted him. The man—shifter, he smelled like a shifter, although Nathan wasn’t sure what kind—was taller than Nathan, his body almost dwarfing Nathan’s, mostly because of how large his shoulders were. His hair was short and spiky, and Nathan could see a tattoo peeking from the open collar of his shirt.

They danced together for a while, but Nathan wanted more. He wanted to lose himself in this guy, to forget about everything else for a while. He wasn’t surprised when the guy leaned closer and nipped at his ear, asking him, “Want to go to the bathroom?”