Nikki Marnell is a history teacher enjoying a great life: she has a job she loves, and two husbands that adore her. A young student’s obsession with her threatens to destroy everything she’s worked so hard to build from a life as a teenage runaway.

Watch her as she and her partners struggle to deal with bigotry in a small town and as they find support and friends in the most unlikely of places.

Warning: Book contains sex between multiple partners, scenes of near rape-not for titillation purposes, MtF transgender person, bigots, homophobes, and scenes of violence. This book was previously published as a short story. It has been revised, edited and expanded from the original into a novel. 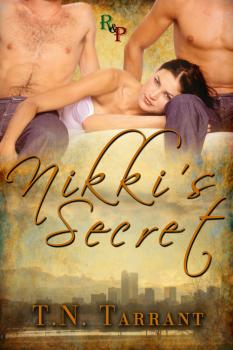 "This story is about Nikki (a school teacher) and her two husbands. They have a wonderful life surrounded by family and friends who love them unconditionally. Then one day there nice safe world is shattered when Nikki is attacked by one of her students and her secret is revealed. Will they be able to bounce back from this as a family. Will Nikki ever be able to put the past behind her and move on.
What I love about this story is Nikki. Her ability to overcome any obstacle and how she has such amazing inner strength and determination. How she was able to overcome insurmountable odds and regain her family, self-respect and her life."
5of5 stars from Adriana, Prism Book Alliance

She knew the moment Ritchie saw her, a huge grin crossing his face and he nudged Cody, pointing her out. An equally huge and happy smile crossed Cody’s face and they quickly maneuvered to reach her. Cody grabbed her first, kissing her gently as he held her close. Nikki sighed into his mouth, savoring the first taste of him after a week of them both being gone. Then Ritchie drew her close and kissed her, his taste different, but just as familiar and wanted. Nikki noted a couple of startled looks, but mostly they weren’t even noticed in the crowd of travelers. She smiled up at them.
“Let’s get your bags and go eat,” Nikki suggested. “I didn’t have time to make dinner, the meeting with the Sloyers ran over a bit.”
Cody and Ritchie both frowned. “I take it from your tone it didn’t go well?” Cody asked as they headed towards the luggage pick-up. Nikki smiled as Ritchie guided her with his hand on the small of her back. They allowed her the space she needed for her control issues, but she had learned to accept their protectiveness. They’d had some pretty rough patches over the years, but family support from Abe and Jane, and a willingness to get counseling for help, had gone a long way to letting them working those problems out to their benefit. Her wedding rings glinted in the light as she reached out for Cody’s hand and she smiled. The fine gold bands matched the rings her husbands wore almost exactly. The only difference were the birthstones: one of her rings held Cody’s birthstone, flanked by diamonds, and the other held Ritchie’s birthstone, flanked by diamonds. Theirs were just like hers, except they both wore a band with her birthstone, then the other held the other man’s birthstone.
“What’s the smile for, prettiness?” Ritchie asked.
“I was just thinking of our wedding rings,” she answered him first, then answered Cody’s question. “And no, it didn’t go well at all. Unfortunately. None of us were surprised though. It’s not the first time Pat has fixated on a teacher, I learned today. So Vincent has not only removed Pat from my classes, his schedule is being altered to keep him as far away from my class as possible during the day.”
Neither man said anything, but Nikki could sense from the stiffness of their bodies that they weren’t happy. She wasn’t happy either, but what could be done, had been. There wasn’t anything else they could do. Cody’s hand briefly tightened on her, while Ritchie’s hand on her back rubbed briefly, each man telling her silently that they were there for her.
After getting their bags, the threesome went out to one of their favorite restaurants for dinner, a place they could sit and even indulge in a slight bit of PDA without being hassled. None of them were very demonstrative in public, but they didn’t care to totally go without touching each other just because they were out and about, either. The food was perfect, and they shared the details of their respective weeks. She shared some of the hijinks her classes got up to, including short segue into trying to find proof that Hitler had had a crush on Stalin, that was why Hitler was so determined to bring Russia down. That had led to a discussion of the current topics regarding Russia, and it’s suddenly more virulent anti-LBGT laws, and the ramifications of them. There was even a discussion on the effectiveness of boycotting or moving the Olympics, or if it would be more effective embarrassment for Russia to deal with actually arresting so many internationally known people, if the athletes themselves acted to show their support of LBGT people and their rights. That had led to the discussion of whether or not embarrassment was an effective tool in changing any country’s political behavior, in particular countries such as Russia and the United States, both notorious for doing whatever they both damn well felt like, as evidenced by the Cold War.
Cody and Ritchie regaled her with a story about the utter confusion their new client displayed as they worked to explain to him exactly how their systems worked. The young man admitted to being, in his words, “a techno-idiot,” but was willing to learn, if somebody was willing to sit down and teach him. So Cody and Ritchie had done exactly that, helping him to learn how to use not only their systems, but helped him better understand other programs he had for his online business. They settled back to enjoy their dessert, sharing heated glances, letting the anticipation of getting home and getting naked get them revved up. Nikki smirked at her husbands as she mentally thought about where her favorite turtleneck was…from the looks she was getting, a scarf around her neck wasn’t going to cut it tomorrow.

Nikki sighed and yawned as she dropped her bag beside her desk. It had been a long, very satisfying night, her husbands making sure that she had no doubt that they had missed her. Her body was pleasantly sore in all the right places and she'd had to search out her turtleneck to wear, to hide the marks on her neck, just as she’d thought at dinner last night. She chuckled to herself as her body tightened a little in remembrance. The only sour note in the entire evening was another phone call from Pat that Cody answered. Pat’s enraged reaction to Cody’s claim on Nikki, as well as his telling Pat not to call anymore had been unpleasant. Having to call the police and Vincent again had been just as bad, with the detective that came around, Muncy, questioning whether or not Nikki’s behavior or dress was giving an impressionable young boy the wrong idea. Nikki had glared at him, informing him that he could either take her concerns seriously, and respectfully, or she could file a formal complaint against Muncy as well. She wouldn’t take harassment from a young boy, she certainly wouldn’t tolerate it from a grown man who should know better.
Her phone beeped at her and she pulled it out of her purse, laughing as she saw that it was a sext from Ritchie, although it was obviously taken by Cody: Ritchie, in their shower, lathered head to toe and coyly hiding his bits and pieces.
What do ya think, sexy beast, isn’t he? The text read.
Very… just as sexy as the other beast who got him to pose for us, she replied. I’ll call you at lunch.
Love you oodles and bunches, and Ritchie says to tell you he wants to go down on you for lunch. Personally, I think that’s a smashing idea…Can we come to see you? *wicked eyebrow waggles at sexy smexy wife*
Nikki laughed out loud, shaking her head. NO!!! LOL There are innocent eyes here!!! And some of them even belong to the kids! You both can have me for a snack when I get home this afternoon.
I love working from home…
She sat down, put her phone away, and booted up her computer. The room was a nice pleasant green color, but only because she’d paid for the paint herself three years ago. Some of her fellow teachers had a week long painting party, painting their classrooms out of their own pockets, but the district allowed them to choose the colors. Books of all kinds were stacked on shelves around the room, including many of her own private collection. The students were free to borrow one at a time, but they couldn’t borrow another until they returned the first, and it was completely on the honor system. So far in the four years she’d been here, she’d only had to replace one book, proving her theory that if you act as if your students have both intelligence and honor, they tend to prove you right.
The first hour of the day was her free period to do anything she needed to, so she got caught up on school news and answered a few emailed questions for some of her students. Then she began setting up the lesson for next period on the blackboard. The discussion over the current social and political situation with Russia and the Olympics had been so successful with her last period class yesterday that she wanted to introduce it to her other classes today. A short report from her students about their families and friends reactions to it would make a great homework assignment, especially from those students who still had relatives that lived during WWII. The views of parents and grandparents that grew up in the influence of the Cold War would give her students an eclectic, and very personal, set of reactions that could be discussed in class. Two weeks would be enough time for them to get their stories, and write a report from them. A soft sound had her turning around, smiling at first. Her welcoming smile faded as she saw who her visitor was.
Pat Sloyer stood six feet away, dressed, as usual, in dark jeans and a band T-shirt, with his jean jacket on. What made her blood run cold was the gun pointed at her, and the unhinged glint in his brown eyes.