The Brothers of Menace MC 6

Lil has pretended to be someone else, all for the chance to feel alive. But then Pierce comes along, tatted up and pierced in all the right places, and she feels like she doesn’t have to pretend anymore. It arouses her, excites her, but most of all it frightens her.

When Pierce saw Lil he became obsessed, but when the truth about who she really is comes to light, the situation becomes more complicated than he ever anticipated.

Still, Pierce doesn’t care if Lil has connections with the Brothers of Menace. He will have her, even if that means going up against a fellow Brother for the right to claim her.

With a threat still hanging over the Brothers, the conflict of Lil’s ties to the MC, and Pierce’s need to just take her and forget about everything else, he must decide what is really worth fighting for.

The Brothers of Menace MC 6

More From The Brothers of Menace MC

They kissed softly at first, his tongue moving along hers gently. She curled her fingers into his body a little harder, pressed closer to him, and this small, involuntary sound left her when she felt the hard definition of his erection press against her belly. He was big, but that wasn’t a surprise given his overall size. Her body trembled, her nipples hardened, and she was wet between her thighs.

Her pussy clenched, hard, painfully, and pleasurably. Everything inside of her screamed that she’d never felt this way about a man, never felt this arousal … not after what had happened. She should just give in, let herself experience this. But Fallina couldn’t. She didn’t want to jump into something, no matter how good it made her feel.

With every swipe of his tongue along hers, every suck he did to the muscle, every stroke of his hand down her back, she felt desire pour through her cells, trying to claim her fully.

He pulled away, still keeping her close, but the contact between their mouths broken. He panted, breathed out heavily, and that hard, steel-like erection was still pressed to her upper belly. He was so much bigger than she was, so much taller. At clearly a foot taller than her five-foot-six height, Pierce was this mountain of a man, this beast made of muscle and strength.

“I want you so badly, but I don’t want to do this right now.” He cupped her cheek. “I want to take you in a bed, with you naked, beneath me, and only your moans and harsh breathing the backdrop.” He leaned down and kissed her again, pried her mouth open with his tongue, and fucked her that way, just claimed her like she’d never been claimed before. “I want to be able to lick and suck at every part of you, drag my tongue over every inch of your body, and show you what it means to be possessed by a man that wants you so badly he could drive a fucking hole through steel with his cock.”

She gasped at the crudeness of his words.

“I should be whispering sweet things to you, bringing you flowers and candy, holding doors open for you and shit,” he said on a whisper against her mouth. “I should be a better man for you, because that’s what you deserve, but that’s not who I am, Fallina.”

She nodded, knowing exactly the type of man he was. “I don’t want sweet things or chocolate, Pierce.” She pulled away an inch and looked up at him. “I want a man like you.” 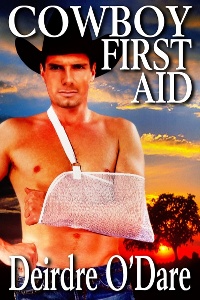 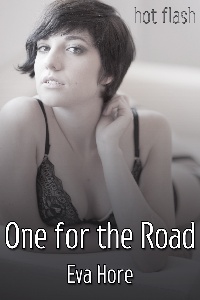 One for the Road (MF)
Eva Hore
In Shelf
$0.99
Tweets by
sirenbookstrand