Power Play: Kelsey and the Executive

Kelsey never dreamed her first job out of college with her bachelor’s degree in hand would be as a secretary. Still, she’s grateful to have any job at all, with the economy at a standstill, and she consoles herself that she is, after all, an “executive” secretary to one of the most powerful men in the country. Oliver Pierce turns out to be a harsh taskmaster, and while her friends wonder how Kelsey got the job at all, with such a thin resume, Kelsey doesn’t have to wonder. It becomes quite clear very quickly that her lack of experience is exactly what Oliver Pierce was looking for, and she finds herself utterly seduced, happy to be his perfect blank slate, ready to be shaped and molded and made completely his.

Power Play: Kelsey and the Executive

“Kelsey, do you have short-term memory issues?” He leaned back in his chair, loosening his tie.

“N—no.” She could see where this was going, of course, but was helpless to stop it.

He crooked his finger, motioning her forward. “Then you do remember what I said about your wardrobe yesterday?”

She nodded, walking slowly toward him, feeling like she was in a dream. This wasn’t happening. Couldn’t be happening. Of course she remembered what he’d said. But surely one violation of the office dress-code didn’t warrant anything more than a warning. Another warning. Certainly not anything so dire as getting fired. Or worse.

“Did you read the dress code when I hired you?” Oliver inquired as she stepped around to his side of the desk as he indicated. He turned his chair toward her as she approached, her trembling knees almost touching his. She just nodded her response, looking down at him. “I must not have been specific enough, is that it?”

“I—I don’t…” Kelsey’s breath caught when his hand cupped her knee in her striped stockings. His fingers caught the fabric of her tights and pulled, letting them snap back into place.

“Striped stockings are not allowed,” he reminded her. “Black, navy or nude only.”

“Oh.” Of course she knew—but maybe if she played dumb? His hand was still on her knee. No, her thigh. Oh that felt nice. His hands were big, covering a lot of area.

“Do you know why?” His hand was definitely on her thigh. Nowhere near her knee anymore. She shook her head, making a little noise in her throat that she hoped might pass as an answer. “Distractions, Kelsey.”

“There’s a natural polarity between the masculine and feminine, no matter their circumstances. Did you know that?”

“Men and women—we’re like magnets, drawn together. It’s inevitable really.” His hand was on her inner thigh, slowly kneading her flesh. Kelsey could barely keep her breathing under control, trying not to show how excited she was, hoping he didn’t notice her knees quivering.

“It’s hard enough for men and women to work together, side by side every day, without distractions like these.” His hand moved lower, lightly stroking the back of her knee. “Do you understand?”

“Yes, sir.” She understood now, without a doubt, even if she hadn’t before.

He looked up and met her eyes, his expression unreadable. “Take them off.”

“Sir?” she breathed. He wasn’t serious. He couldn’t be.

“Take them off.” He leaned back in his chair, looking annoyed that he had to repeat himself, crossing his feet at the ankles, his arms over his chest.

Kelsey blinked, a part of her screaming that she should run straight to human resources and report this, but her hands moved to her hemline, trying to negotiate a way of taking her striped stockings off without having to pull her skirt up, and she couldn’t think of one.

If the thought of being spanked over his desk had been humiliating, this was far worse. Now she had to face him, watch the corner of his mouth twitch, almost a smile, as she realized she couldn’t do this without hefting her skirt up to hook her thumbs into the elastic tops of her tights.

Maybe he’s making you take them off so he can spank you?

The thought was horrifying. And exciting beyond words. 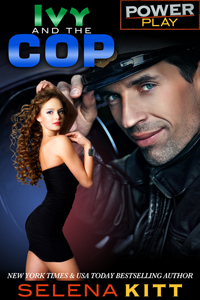 Power Play: Ivy and the Cop
Selena Kitt
In Shelf
$2.99
Tweets by
sirenbookstrand