An historical novella by Kitti Bernetti with menage and MM themes.

It is a truth, universally acknowledged, that a single man in possession of a good fortune must be in want of a wife. But, unlike the wealthy D'arcy, Cavendish De Courcy's family is broke and he must marry an heiress to save the De Courcys from ruin. When, two weeks from his wedding, he meets the superbly proportioned Nathaniel and succumbs to all the illicit joys that gay 18th-century London brings, how on Earth can Cavendish face his nightly duty to his new wife? And how will he and Nathaniel ever find their happy ever after? 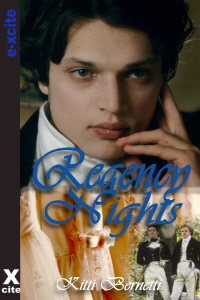 Cavendish scraped his fingers through his mop of chestnut hair. Duty, his life was ever duty, and once he was married with children it would be even worse. He sighed. He enjoyed cavorting around town with the other young blades, eating at his club, playing vingt-et-un at the tables, riding his horse through Kensington Gardens. Polite activities such as this musical evening were feminine pursuits. Although Cavendish could charm any woman, his blood had never been stirred by a girl. If he didn’t get out of this grisly parlour soon, he’d die of boredom. Feeling a sudden restlessness stir his long limbs he stood up. Ladies fluttered their fans in agitation and men looked towards him disapprovingly. He couldn’t walk out, not while the pianist was playing, but now he stood in the crowded salon with nowhere to go. ‘What is it, my love?’ hissed Lady Arabella, her tight curls bouncing as all eyes fell upon Cavendish.
‘The ladies will faint in this heat. I am merely opening a window.’ He smiled his broadest smile and was rewarded with thankful nods from several of the more generously proportioned women whose décolletages trickled with perspiration.
Cavendish moved quietly, taking care his polished hessian boots on the floor should not spoil the music. He unfastened the latch. But, as he did so, his gaze like an eagle spotting a young rabbit was caught. The world, its noise and activity shrank down to the one spot across the way. For in front of an open french window stood an Adonis of a young man. And he was naked. Apart from a cloth no bigger than a handkerchief at his waist. Thinner than cheesecloth, the flimsy film tented teasingly, displaying the fact that even at rest, the boy possessed a cock to be treasured for its fullness – its ripe, hefty masculinity. The youth posed stock still, one sturdy leg at right angles to the other in the manner of a Greek god. Cavendish marvelled at the superb muscularity of his arm as it held aloft an upturned cornucopia filled with tumbling fruits. Cherries, purple grapes, peaches whose fuzzy blushing skin echoed the cheeks of the youth. For blushing he was. He did not look comfortable. Atop the youth’s sandy, sun-kissed waves had been perched a coronet of golden leaves. As Cavendish watched, mesmerised, he saw a hand grasping a paintbrush reach out and tilt the youth’s chin a mere fraction. The movement turned the youth’s face so that his delft-blue gaze settled upon Cavendish. Cavendish stood engrossed, enthralled by the man’s beauty. Those stunning eyes reeled his attention in as helpless as a fish floundering on a line. He had admired some comely women in his time, seen the beauties of the day strutting their charms along London’s expensive streets. But none had ever caused the blood to rush insanely to Cavendish’s loins in the way it did now. The azure eyes so direct, so searing in their intensity, pricked his animal desires. Cavendish looked closer and realised the boy stood in front of a mirror in which his buttocks were displayed in all their glory. Firm as an athlete’s, rigid as a stag’s; more delectable than the finest of cleavages. Cavendish’s cock stiffened instantly against his breeches. If it was the last thing he did, Cavendish knew he had to seek this young man out. 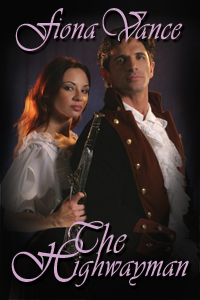 The Highwayman
Fiona Vance
In Shelf
$2.99