Chance, a sexy personal assistant, is still recovering from his recent breakup. When his electricity goes down, he's left waiting on the Sunshine Electricity and Gas Company. But when Todd arrives, sparks fly. 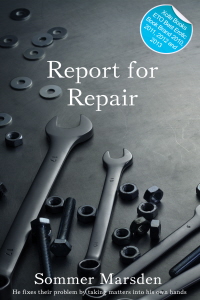 The doorbell dinged again and Chance put a hand to his heart to still it. ‘Mister Impatient,’ he muttered, taking a deep breath. Then he tugged the door open to find tall, bald and surly standing there. And his heart promptly resumed its erratic state. ‘Hi there.’

‘Hello, sir. I’ve gotten your line reattached.’ The guy stepped up onto the door sill and Chance took a step back instinctively.

‘Thanks. It’s really become a pain in the ass,’ he blurted.

May he what? Chance thought for a moment and then he nodded. ‘Oh, of course. Come in Mr …’

The guy looked torn which was comical, it was only a drink. Then again, Chance didn’t know Sunshine Gas and Electric’s policy on fraternizing with the clients. And what if he lost his mind and his manners and just kissed this guy? Begged him to do things he knew, just by looking at him, that he could do. What was the policy on that?

The fat wiener dog yawned and lay his head down on the hardwood floor. He looked very unimpressed. Elvis was the Zen-like calm to Chance’s fidgety nerves.

‘Elvis,’ Todd said and followed Chance into the kitchen, his work boots leaving fine bits of grit on the floor. Somehow that grit was sexy, at least Chance thought so. Chance poured him a soda with extra ice and handed it over. He watched transfixed as Todd’s throat bobbed once, twice, three times and the soda was gone. It begged the question what else could that mouth and throat do?

Chance cleared his throat, blushing like a whore in church. ‘That tree is a nightmare. And I know you can’t do anything about it legally, but my God, I’m ready to go over there with an axe and just start doing my Paul Bunyan routine.’

Todd’s stern face broke into a crooked grin and Chance felt his heart turn over in his chest. He also felt his cock spring to life in his pants. He started running through his list of errands and chores for Becca. No use embarrassing himself in front of the help by getting a raging hard-on over a smile. Big bald Daddy was probably straight or taken or just not interested in the likes of skinny, pale, blond Chance.

‘I’d like to see that. If you crack and go all caveman on it, let me know.’

Chance saw his opportunity and said, ‘And how would I do that? Call SGE and report myself as a crazed neighbour with an axe.’

Todd fished in his coveralls and pulled out a business card. ‘You could. Or you could just call me and save yourself some time.’

Chance’s cock became more demanding. Jesus. This man up close was a dream. Big, imposing and bald as Mr Clean. He smelled like summer air and hot tar and man. He smelled like fantasy sex and salty kisses and carnival rides. Chance had to force himself to stop sniffing. Even Elvis was staring at him. Their fingers brushed for an instant and his skin tingled with mild electric zings and pops.

Draw Me Out
Shannon Pearce
In Shelf
$1.50
Tweets by
sirenbookstrand