Room With A View

Liz and Tony worked hard to convert their spacious attic into their own special, multi-windowed room with a view. There, in the massive four-poster bed, they explore their fantasies. But it has another use--as a retreat for practicing domestic discipline, in which Liz pays for her transgressions--over her husband's lap, or a chair, or a stool ... if you like spanking romances, you'll love this story! 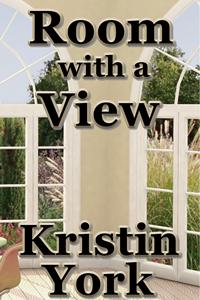 Room With A View

Liz dropped down onto the couch beside her husband and burrowed her way into his embrace. At long last, the children were asleep and the best part of her birthday celebration was about to begin. She had been looking forward to this for days, now. It was time for her birthday spanking.

"So, you about ready for bed, babe?" he asked. "I'm really beat tonight and thought maybe we could turn in early." He chuckled when she looked up at him, a mutinous expression on her face. "Hmm, I'm guessing that's a no?"

"You'd better be kidding, buddy, 'cause this birthday celebration has yet to begin, as far as I'm concerned."

"Do you mean to tell me you're expecting something else?"

He was teasing, of course--a fact she well knew--and she slipped into the role of brat easily enough. Fixing her lips in a mock pout, she gave his chest a teasing slap.

"You know perfectly well what I'm expecting, Tony--and I'll be hell to live with if I don't get that spanking tonight."

"Indeed?" One dark eyebrow disappeared beneath the black hair that fell across Tony's forehead. "Well, we can't have that, now, can we?"

"I think that's a good idea. But first," he added, "we have to make a stop on the second floor. I have one more gift for you. It's in our closet."

"Another one?" Liz looked at Tony in surprise, then glanced at the beautiful Black Hills Gold watch he'd presented her with earlier in the evening. "But Tony, you've already spent a fortune on me as it is."

Tony stood and pulled his wife up into his arms, favoring her with a lingering kiss. "You're worth it, babe. And besides, the one upstairs isn't exactly the kind of gift you can show to your mom or the kids."

His wicked smile heated Liz's blood. "Mmm ... something naughty, then?"

"You'll see soon enough," he replied as he steered her up the stairs. Standing in their bedroom doorway, he added, "Well, what are you waiting for?"

Liz looked up at her husband. "Aren't you going to wait to see me open it?"

"Actually," he said with a grin, "I'm going to head upstairs. I want you to open the gift, follow the instructions that come with it, and then join me."

"Instructions?" She was halfway to the closet by now. "This sounds intriguing."

Upon opening the closet door, she was greeted with the sight of not one, but two packages--one the size of a large dress box and the other clearly a shoebox. She carried them to the bed and went to work on the larger of the presents first. She worked the ribbon loose, carefully slit the rose patterned paper at the seams and at last drew back the lid on the large white box. Stunned, she caught her breath. She'd expected a barely-there negligee, but the clothes inside the box were quite substantial. In fact, they were dull--or would have been--for anyone who'd not fantasized about taking the role of a naughty schoolgirl. Liz, however, had long been enamored with that particular fantasy, so she was delighted as she pulled one piece after another from the box. White shirt, gray sweater, gray and blue plaid skirt, gray knee socks ... and, of course, the requisite plain cotton underthings were spread out on the comforter; and underneath it all, a note that read:

You have been tardy to my class one time too many this semester. You will report to me after class for the appropriate discipline.

Do not be late!

A delicious sensation of nervous electricity settled low in Liz's abdomen as she stripped out of her clothes and began to dress in the uniform. It had taken her quite some time to share this particular fantasy with her husband. For years, she'd kept the secret of her school pranks and her ability to evade detection a secret, but even at sixteen, she'd wondered what it would be like to be called to a classroom or the principal's office for a sound paddling. In the note, Tony had referred to her by her maiden name. It appeared that he intended to make her fantasy come true.

The uniform, once she was fully dressed, made her feel very young, indeed. She opened the smaller box and found, to her delight, a pair of saddle shoes and a set of rubber bands and blue hair ribbons. Once she had finished dressing and had her light brown hair up in two pigtails, she felt every inch the naughty schoolgirl being called 'on the carpet' for her misdeeds. Her stomach fluttered with anticipation and, after reading the note one more time, she hurried down the hall and up the stairs.

Oddly enough, the room that she and Tony had claimed as their own special hideaway was completely dark. She stepped inside and flipped the light switch, but there was no sign of him. Puzzled, she crossed to the bathroom, but he was not there, either. "Tony?" she called out. "Tony? Are you up here?" 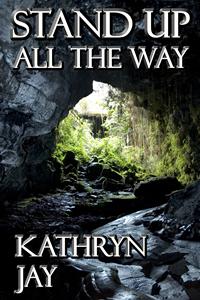 Stand Up All the Way
Kathryn Jay
In Shelf
$6.88