Living in Bliss, New Jersey has it perks, unless you're a shifter looking for love or a human looking for peace and quiet. Not only does Calla Savitch, owner of Shear Bliss salon, have to deal with warring panthers and werewolves with overlapping appointments, she's fed up with their constant matchmaking attempts. The last thing she wants especially is a hook-up with the one shifter who broke her heart years ago.

Handsome were-panther Caleb Houlihan still nurses the guilt of Calla's heartbreak, but when presented with a second chance to woo her he is reluctant. Calla may forgive his youthful indiscretions, but when she discovers his aunt's true motive for wanting them together, will she send him packing?

On this stretch of the Jersey Shore, it's a different "situation"!

Heat Rating: Scorching
Word Count: 21,000
1 Ratings (2.0)
Paranormal Shape-shifter Erotica Fiction
In Bookshelf
In Cart
In Wish List
Available formats
HTML
PDF
Mobi
ePub
Reviews
This book was too short, and felt rushed. I got no real sense of love or feelings between Caleb and Calla. He broke her heart and was with someone else but she forgives him in 2 seconds without any real emotions or talking. No settling the past. No words of love. I just don't buy it. It annoyed me. No reason for the big surprise that happened near the end. It felt like half a book.
Missy
Read more...
Excerpt

Still in cat form, Caleb took to the sand with graceful stealth, staying to the shadows behind the light posts lining the edge where the sands met the residential area. Closer to Calla’s beachside home, he caught a familiar scent in the air—shifter, yet unmistakably female—and followed it directly to the brick wall that separated Calla’s property from the public walkway to the sea.

Interesting, Caleb mused to himself, and wondered if Calla herself had the ability to give off such a scent considering her alleged genetic makeup. He hadn’t intended to come here—he’d originally started in this direction to track down Trisha and her friends at The Wall, a favorite night club situated on the shore. If necessary he could shift partially—covering all the essential parts—and order the girl home if she appeared to be having too good of a time to threaten her betrothal to Malcolm Weaver.

And if I keep telling myself that, I can justify spying on Calla Savitch as a happy accident, he thought as the entranceway to her backyard came into view. On light paws, Caleb bent low and crept closer to the wall, picking up bits of conversation drifting from her porch. He stilled and kept out of view, tuning out the roar of the ocean behind him.

“So, how goes the search?” asked a woman sounding way too sultry to be Calla.

A barking laugh broke the short moment of silence that followed. “It’s not so much a search as it is a complete lack of interest.”

Breathless silence followed. Though curiosity burned through Caleb’s senses, he didn’t dare raise his head even a centimeter over the top of the wall. He inhaled the crisp, heady scent of she-wolf and knew immediately the other voice belonged to a Winston—most likely the uninhibited Maya. He knew the two women were close, but the direction of their conversation—coupled with the amorous heat given off by the shifter—implied to Caleb a more unconventional relationship than friends might have suspected.

He closed his eyes to better detect their movements. He heard hands smoothing over skin, quiet sighs of pleasures, and finally a juicy, smacking liplock. Sweet Calla, I hardly knew ye. With Maya, of course, he expected a fondness for both genders—the she-wolf was a self-proclaimed trisexual.

Caleb grinned to himself, remembering her drunken proclamation at a past Indian Summer Ball. He then wondered if the breakdown of his fling with Calla all those years ago precipitated this broadening of his old flame’s sexual horizons.

Sighs turned to steady moaning now, and by damn if Caleb didn’t begin to harden in panther form. That’s it, he decided, and shifted to human form. Given the vibes thrumming from the back porch, Caleb doubted either woman would spot him peeking.

Still crouched low in the sand, he bent his fingers over the brick and lifted his head to skim the yard area. In the glow of porch light, Calla and Maya stood locked in a tight embrace. Calla, willowy and pale in her nightshirt, rested one hand on Maya’s bare bottom, kneading the ample flesh while her other hand cupped a breast. Maya’s hand had to work as well, though with their position Caleb couldn’t readily see where the she-wolf touched her…friend. Wherever Maya devoted that attention, though, Calla appeared to enjoy it. Caleb’s keen eyesight picked up on the rapid flittering of the woman’s eyelids, her face twisting with ecstasy as she moved with Maya to deepen and prolong their kiss.

It seemed to go on forever, and Maya finally broke free and moved to Calla’s side, pressing her breasts against the other woman’s shoulder. Here Caleb made out Calla’s inviting shape underneath the skimpy shift—rock hard nipples denting the fabric, which dipped at the delta between her quivering thighs. Unconsciously he grasped the base of his cock, and his fingers curled around his sac, tugging and massaging to full arousal.

Maya lifted the hem of Calla’s short gown high enough to reach the waistband of her floral-patterned panties. She slipped her hand underneath the slim triangle—Caleb watched fingers flex and bend as Maya presumably worked Calla’s pussy and clit to a near-liquid state.

“Let’s go inside,” he heard the she-wolf buzz in Calla’s ear. “We can do so much more, comfortably.”

No sooner were the words said, though, when Calla’s heavy-lidded expression slowly sobered. She seemed to awake from a dream and turned to Maya as though seeing her for the first time. Her hand fell limp from Maya’s backside and she gently extracted the she-wolf from her private parts.

“You are definitely tempting me tonight,” Calla said, appearing to ignore Maya’s look of confused disappointment, “but I’m sorry. I’m just not feeling it right it.”

“I didn’t get that impression a second ago,” Maya said accusingly.

Calla, however, just smiled and offered a chaste kiss to Maya’s nose. “Come by the salon for a freebie. I’ll make it up to you.” Without another word, she backed into her house and slid the glass patio door shut.

“Calla?” Maya called after her, but her plea met with the quiet swish of a curtain blocking her—and Caleb’s—view of Calla’s kitchen. The she-wolf growled and turned sharply away, storming down the path toward the ocean. “I doubt it’s the kind of ‘freebie’ I’d want,” she grumbled.

Still in human form, Caleb pressed his back to the wall and hoped the aborted seduction preoccupied Maya enough not to detect his scent. At it was, he expected her to shift back to wolf form once she hit the beach, and dash into the dark.

Instead, Maya fulfilled half his prediction. Not seconds after shifting, those white socks trotted over the sand to where he hid. Caleb glared uneasily into bright blue eyes and the best approximation of a canine grin. 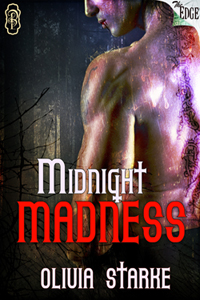