Cadeon Smee and Miles Starkey have lived in Neverland for far too long. Mutiny is afoot, and they plan to lead the pack against Hook in order to earn their freedom from the madman. All they need to do is find the right moment.

When Hook demands the two accompany him to catch Tinker Belle once more, they do the pirate captain’s bidding. They also find their perfect moment to seize independence. Only Tink is hurt in the melee, and the only course of action seems to be turning her human to tend her wounds.

Tink awakens without wings, and the same size as the two men she’d never noticed were quite so handsome. Anger makes her rail against them, but the more she fights, the more she grows to desire the dashing, sexy pirates.

To win her heart, Cadeon and Miles must defeat Hook and keep Tinker Belle from Peter Pan’s clutches. 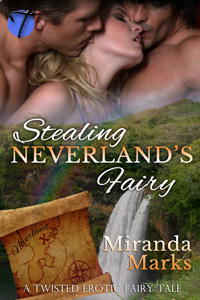 Smee shook his head, clearly with no idea the magnitude of his mistake. His frown deepened and he awkwardly stepped closer. He looked down at his hat and turned it with his fingers. “I wanted to help you.”

“If you’d wanted to help me, you shouldn’t have captured me in the first place. Then none of this would’ve happened,” she snapped.

Tink’s lips moved, the words she had been about to say frozen on her tongue. Had he just admitted to making a mistake without arguing with her? She hadn’t expected that. It made her pause and look at the man. He looked so much different from this new perspective. Everything did. She looked about the room. All the items that had once been gigantic were now sized for her.

Her gaze drifted back to Cadeon Smee. He was also her size. Well, larger than her, but within reason. And he was also more handsome than she’d ever realized. He was very tall, with wide, muscular shoulders and a narrow waist. Light brown, curling hair peeked out from under the cap he quickly replaced. A couple of day’s beard growth covered a strong jaw and surrounded firm lips. His light colored gaze watched her closely. A wave of heat struck her as she looked him over. Her nipples swelled and tightened and her pussy creamed with her juices. Apparently the heat that had ruled her body for days had not left when she’d turned human.

Her magic was gone, but the need remained? Such was her luck.

She envisioned Tiger Lilly and her warrior, but the two in her mind suddenly became herself, lying under Cadeon. Heat suffused her face as she imagined his strong, muscled body over her, pumping his engorged cock into her wet pussy.

Then she noticed the blossom of red on his muscled chest and her needs were blissfully forgotten. “You’ve been hurt as well?”

Cadeon looked down at his wound. “Hook stabbed me. He must’ve nicked your wing when he did it.”

Tink shook her head, the events of the night overwhelming. “So you’ve really done it? You’ve mutinied?”

“Yes, we’ll be free of him finally,” he whispered, the deep caress of words whispering down her spine and making her tremble.