When Dr. Tabansi Vorlundiz entered the gym called Elabore in the middle of the day, he had no idea that his life was going to change forever. Aware of the gorgeous doctor for a while, police sheriff, Maddock Perrington, has been trying to figure out a way to approach the very man he was set to marry years before. A tragic accident, taking away the two other men who were to be in the marriage group with him, put an end to that dream. With two new men, Jordy Dyer and Taggart Undertson, now making up an official marriage group with him, Maddock is ready to claim the one man he's been fantasizing about. But first the Marriage Group will have to break through the walls Tabansi built after the death of the two men he was desperately in love with and then they will have to show Tabansi how well suited they are for each other. What better way to do that than late one night in the gym showers?

Warning: This book contains sex between three to four different sexy men, double penetration between consenting adults, angst, interracial sex and is part of a series.

Heat Rating: Sextreme
Word Count: 14,580
25 Ratings (4.4)
Interracial Menage a Trois/Quatre Science Fiction
In Bookshelf
In Cart
In Wish List
Available formats
ePub
PDF
Mobi
Cover Art by Vicktor Alexander
Reviews
Cannot wait for the next story :)
cat90
OH Hell I so hope this is gonna be a series, not only is it sweet & sexy but it was also free.
Gigi
Read more...

More From The Marriage Groups

“He’s gorgeous, man. Way more beautiful than that fucked up picture you keep in your billfold,” Jordy snorted from beside him.

Maddock turned to look down at his partner with a snicker. Jordy used humor and sarcasm to defuse the tensest of situations. Usually it was a welcome relief for Maddock, this time it only annoyed him.

“Shut the hell up, JD. It wasn’t like I could walk up to him and ask for a picture. As it is, once he finds out who I am, he’s going to hate me,” Maddock pointed out.

“Man, stop being so hard on yourself. Seriously. You weren’t responsible. It was an accident. Everyone knows that. You have got to let that go and move on. Guilt is not attractive on you. It makes you look washed out and old,” Taggart said with a straight face.

Maddock turned to look at the blond, his eyebrows pulled low over his eyes in confusion. Seeing the grin on the younger man’s face, he let his lips lift into the barest hint of a smile and shook his head in fond amusement. Taggart and Jordy were godsends for him. He’d met them one night when he’d been trying to drown his guilt in a tidal wave of Scotch. Taggart had taken his glass from him and Jordy had pressed against his back. Before he knew it, both men had him pushed against the wall of the bar, with his pants pulled down and his cock leaking pre-cum. After they’d stroked him to a mind-blowing orgasm, he’d invited them back to his home and they hadn’t left. It was eight months later and they were still there.

He’d never tell them but it was exactly where he wanted them to be.

“Shut that hole in your face, Tag, and let’s get back to work,” he ordered, his chest vibrating with the low growl of his words.

“Now, Mad, you know how I get all turned on when you use your Dom voice on me,” Jordy teased.

Maddock’s guilt released him momentarily and he gave a short bark of laughter, ignoring the looks of surprise on his partners’ faces and turned back toward the free weights. Picking up a set of one hundred pound weights, Maddock pushed thoughts of Tabansi to the back of his mind, the same way he’d been doing for the last year.

An hour later, Maddock walked into the locker room followed by Taggart and Jordy, his eyes scanning the room for a glimpse of Tabansi. The younger man had come out and run on the treadmill for a moment before going into the Pilates room to work out there. He’d finished five minutes before Maddock and his partners. While Maddock would argue the point, he knew he’d ended their session early today because he wanted to see Tabansi before the younger man left for the hospital.

His eyes scanned the locker room area and when none of the men present had light brown skin and closely cropped black hair, Maddock felt the sickening weight of disappointment settle in his chest. Dammit. He was so hoping to see the younger man before he left. He didn’t want to talk to him. He so didn’t think they were ready for that… okay, he wasn’t ready for that. He did want one last glimpse, however. One last look at one of the most beautiful men that he’d ever seen in his life.

“Shit,” he whispered in disappointment as he walked towards his locker, not paying attention to anyone around him. His mind played the buzzing noise of the uninterested while his gaze took on an almost laser sharp quality. The areas at his peripheral vision went hazy and gray, while the steps directly in front of him were sharp, crisp, the colors vivid and blinding as he walked towards his blue locker.

He couldn’t remember ever feeling so… low. Oh, wait. Yes he could. It was the day he watched Tabansi grieve at the gravesite of Trevor and Christopher. Dammit all to fucking hell. It always came back to that. To them. His life had become a series of glimmers of happiness tempered by devastating replays of Tabansi’s heartbreak. What the fuck was he supposed to do? He had to figure out something. He had to do something to help Tabansi, to give the younger man a future, some happiness, so that the nightmares would stop.

Shaking his head, Maddock’s eyes closed as he went through every possible scenario he could think of to get him to help Tabansi. Stumbling when he bumped into someone, Maddock muttered out an apology, chastising himself for walking with his eyes closed… again. Jordy always teased him about his desire to be blind and while Taggart had reprimanded the younger man about his insulting statement, the blond had been laughing. Maddock didn’t have a desire to be blind; he just wished sometimes that he couldn’t see.

He didn’t want to think about the fact that they were exactly the same thing.

Maddock’s eyes flew open and he looked down with a gasp. Standing in front of him was Tabansi, dressed in a pair of green scrubs, his white medical coat folded over one arm, a pair of white tennis shoes on his feet. Maddock looked down into the younger man’s beautiful brown eyes and felt his heart melt once again. Was it possible to fall in love with someone at first sight twice? Once with a picture and the other when meeting said person face-to-face? If it was possible then Maddock surely was experiencing that phenomenon right then.

His heart raced, beating out a staccato rhythm against his ribcage. His chest rose and fell with shallow breaths. He clenched his fists in an effort to restrain himself from reaching out and touching the high cheekbones of the gorgeous young man in front of him. He wanted to fall to his knees in front of Tabansi. He wanted to cling to the younger man’s legs and beg him, plead with him to smile at him, just once. Maddock knew for certain that Tabansi’s smile had healing powers. Tabansi’s smile could heal every dark place within him. It could chase away the demons from his childhood. It could infuse his entire being with power. Tabansi’s smile would give Maddock something he’d been searching for years: an anchor in the storm.

“Don’t worry about it. It was my fault. I need to stop walking with my eyes closed,” Maddock whispered the words, afraid that if he spoke any louder the other man would simply disappear.

“Does it make walking more interesting for you when you do it that way?” Tabansi asked with an almost hesitant smile. 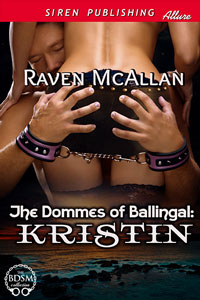 The Dommes of Ballingal: Kristin (MF)
Raven McAllan
In Shelf
$3.50
Tweets by
sirenbookstrand