The life of a male prostitute—a jinan—in the Floating World of the Beautiful Way in ancient China in the waning years of the Chu dynasty, 200 BC, was a sensual but cruel, often foreshortened, bitter-sweet existence. The Beautiful Way weaves a complex, romantic, and all too often tragic tale of the interwoven lives of six jinan of one male brothel—the Cut Sleeve Nanleshijia. Laid against their linked stories are those of the managers and servants who guided these beautiful young men through their training, their initiation—in which they became bitten peaches—and beyond to burn as bright stars, and, in too many cases, sputter too early to ash.

While providing an intricate network of stories of adventure, sexual exploits, and entwining relationships, The Beautiful Way strives to capture the essence of the deliciously euphemistic Oriental world of men making love to other men in China’s ancient past and covering two kingdoms. The stories of these six jinan and of the men who served, coveted, and mastered them are interwoven tales that go beyond the random act of sexual release between men. They offer more complex and context-richer studies by gathering age-old themes, exotic settings, and all-so-human characters up into the Floating World of the Orient in which men give themselves to other men—some more freely than others—for something in return, whether it is for money, position, power, survival, honor, service, devotion—or, not all that rarely, really, in unconditional love. 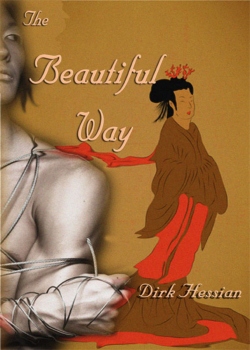 The caretaker judged that he had been right to do as he had done. The school baoan, Niu—The Ox—whose job it was to protect the nanleshijia—male pleasure house—students from the outside world, apparently was more of a threat than a protector. The caretaker—the zhaoguzhe—knew he must accept responsibility for hiring such a young and volatile man as protector. As the caretaker of these young students, the zhaoguzhe had to make what had come out of harmony right again. Sending young Deming—Virtue Bright—to the monks of Langshan—Wolf Hill—was the first step in this atonement. But the zhaoguzhe could readily tell from Niu’s reaction that it would not be enough.

“Where have you sent Deming?” Niu demanded. He rounded on the zhaoguzhe, towering over him, all muscle and power, but knowing that it would be death to so much as touch the manager of the nanleshijia school—the preparation school of Nantung’s male pleasure house. “Deming is not sufficiently prepared yet.”

“Deming is sufficiently prepared in being arousing to men, wouldn’t you say?” zhaoguzhe countered with a hard, accusing look in his eyes. “Deming is fulfilling his destiny, just as any other of those of the Beautiful Way do. He is where he is safe from predators.”

“I protect the students here from predators,” Niu declared.

“I am well aware of your duties here,” said the zhaoguzhe. “Perhaps more than you are. Perhaps I appreciate more what you are supposed to be doing than you do.”

But the zhaoguzhe simply gave Niu a disdainful look and turned and, hanfu—ceremonial robes—rustling against the bamboo walls of the narrow passageway into the heart of the male pleasure house, flowed away like one of the majestic ships that the growing riverside village of Nantung was famous for building.

As famous as the port city on the northern bank of the Yangtze River, near its mouth in the kingdom of Wu, was for shipbuilding, it was even more famous for its beautiful and pliable young men. In this era, Wu was the most powerful of the three Middle Kingdoms in military strength, agricultural production, and trade. Most legendary of its trade goods, though, was its supply of youths for the Beautiful Way—the world of male prostitution.

The Cut Sleeve Nanleshijia was not the only male brothel in Nantung, but it was the most expensive one and the one where the richest and most powerful patrons of the prefecture of Yangzhou, in which it was located, were clients. And it also had the most respected preparation school attached to it. Only the most beautiful and refined young men were admitted there, where, for several years, their talents for entertaining and pleasing were even further refined. The training only went so far, however. Every young man went to his first client a virgin, usually in an auction followed by an elaborate ceremony. And large fortunes were paid for the privilege of being the “first” for one of these young men.

That was why the zhaoguzhe had sent the young Deming where he did. He was dissatisfied with what he had had to do—he had to take less than Deming could normally have earned for his first taking. But the zhaoguzhe knew that time was extremely short before Niu, a very arousing young man in his own right, but a baoan—a protector—rather than a student, ruined Deming for that first entertainment. The inevitable had become obvious when the zhaoguzhe had seen the looks Deming had been giving the muscular body of Niu as the baoan sluiced off his body at the water spout at the end of his working day. Deming could not be trusted to hold himself in check any more than Niu could.

And in this Deming was more at fault than Niu was. Niu was untrained, a virile animal acting on natural instinct. Deming had been trained to control his emotions. For this transgression, Deming had to be punished.

His Kind of Beautiful
Maia Dylan
In Shelf
$2.99
Tweets by
sirenbookstrand