Clemmie Beaumont is a beautiful widow and her plantation has been ravaged by the American Civil War. Clemmie’s only option to save her home seems to be to sell the Beaumont Jewels.

Finally, Clemmie discovers Pearl is nimble fingered in more than a sexual sense. Her light fingered maid soon provides Clemmie with an ideal solution to her conundrum of how to save “Asunta,” her beloved home.

As much as she didn’t wish to think about the devastation wrought by the Civil War it was startlingly visible to see, as terrible scars on the southern landscape she loved. Clemmie raised a hand to her breast as her heart palpitated in alarm. Why, the land was positively denuded, with no one left to work it, and those poor soldiers … well that didn’t bear thinking about. She shook her head as she considered her nearest neighbours, the Steiners, who had lost two strapping boys to a war which had wreaked devastation.
Clemmie knew she was perilously close to losing Asunta. Indeed, the vultures were already circling the prey. Only yesterday she’d watched Randolph Meissner stop his phaeton at the gates to Asunta, and, stepping down from his carriage and twisting his large cigar in his mouth, appraise with great thoughtfulness the beautiful plantation house. Asunta was indeed spectacular and testimony to Joseph Beaumont’s good taste.
Clemmie had hidden behind the drapes seething with anger. ‘You’re not getting your hands on my plantation, you lecherous beast,’ she’d hissed. ‘Not, if I have to go into a whore house and become a whore to keep it.’ And she’d let the drapes fall whilst her gaze strayed to the jewel box.
If the worst came to the worst there were always the Beaumont family jewels to fall back on. After all, Grandmama had said so on her death bed. ‘Why, Clemmie, if it should ever come to a war of conscience over Asunta or the jewels, you must sell my pretty baubles.’
But, I never could of course, Clemmie reflected. She was like Jennifer’s magpie as far as the family jewels were concerned, and she opened the jewel box every day just to gloat over the contents. She certainly wasn’t a covetous woman, but there were two things in her life she worshipped and had sworn no one would take, over her dead body. The first was Joseph’s legacy which was the Asunta plantation, and the second was Grandmama’s jewels, each one of which told a story.
Randolph had instigated such a feverish sense of alarm in her, Clemmie had hugged the heavy rosewood box with its fine mother of pearl inlay, until her breasts hurt, before taking out each jewel and fondling it as seductively as she would her lover.
Yesterday’s recollection was sufficient to send Clemmie to her magpie’s nest right away. Sifting through the jewels never failed to restore her sense of calm and security. She darted a look at the door. Generally, she locked her bedroom door when she opened the jewel box, as you couldn’t be too careful with so many servants. However, with Asunta now virtually a house of ghosts, she’d become careless in that respect.
Clemmie took the key from behind the curtains and opening the box she stared down at the array of jewels. It was common knowledge Grandmama had been a bit of a whore. Indeed, all the Beaumont women were considered as having bad blood in a sexual sense, which only seemed to make them more alluring to the male sex. Clemmie would rather be a whore any day of the week though, than be an uptight southern belle. Clemmie picked up her grandmother’s enamel ring. The ring, the memento of an affair of a gripping sexual nature with a Russian Count, had been given to Grandmama when she was a very young woman. Besides the ring, there were fine Australian fire opals, rubies and sapphires, lesser known but equally as spectacular blood red garnets and, most precious of all, a scintillating sapphire drop pendant which had once belonged to Clemmie’s mother.
The Beaumonts had always possessed a love of collecting tasteful jewellery, the trend having been started way back by her great, great-grandfather, who’d been extremely innovative and determined to better his life. He had sown the adventurous spirit in Joseph, her grandfather, who had come to America with not a penny to his name, but had been astute and business-minded and had seen the promise in the acquisition of the fertile crescent of land by the river on which Asunta now stood. Even Joseph, the visionary, could not have foreseen the war though, and the devastation it had wrought on the southern states. And then of course, there was the sweet locket. Clemmie fingered it suggestively before kissing it and feeling her nipples firm in response. The locket had been a parting lover’s gift from darling Madeline.
Clemmie was so engrossed in her daring recollection of Madeline unbuttoning her bodice that she didn’t hear the door opening and the girl slipping stealthily into the room. When she turned around Clemmie gave a gasp and her hand flew to her breast.
‘Whoever are you, and what are you doing spying on me?’
The girl was striking, and exceedingly statuesque, with the elegant carriage and bearing of an African princess. Clemmie had never seen such a stunning house slave and her gaze slithered over her, from the toes of her obscene bare feet to her smoothly coiled hair.
‘My name’s Pearl, ma’am,’ the girl replied, gazing at Clemmie from beneath thick dark eyelashes which did nothing to hide her familiar luminous eyes, the same eyes, Clemmie noted, which had been watching her earlier. ‘And, I sure wasn’t spying. It was just you were so intent on your dreaming, I didn’t want to disturb you.’
‘Pearl?’ Clemmie rolled the name over her tongue. ‘That’s a pretty name.’
The girl had an insolent and, dare Clemmie admit it, wicked look about her, which made Clemmie shiver and started the long forgotten wetness between her legs. 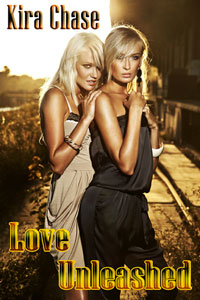 Caught in the Middle (MFM)
Tonya Ramagos
In Shelf
$3.99
Tweets by
sirenbookstrand