The Perils of Forgotten Pain 1

Herman, a cyborg soldier, has overcome illness and discovered much about the society he used to fight for that unnerves him. Now he must ultimately decide where his loyalties lie-with the space dwelling society who designed him to be an efficient killer, or with a kind man who tells him that he should take the opportunity to live on his own terms. 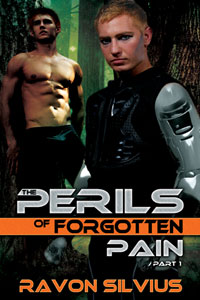 The Perils of Forgotten Pain 1

The memory of Blaze’s lips on his and the sensations that had run through him then flashed in Herman’s mind now. He grabbed Blaze’s shoulders and placed him upright, fighting a wholly inappropriate desire for more contact.

“You can’t sleep here,” Herman snapped. “We need to get somewhere safe.”

“This is safe.” Blaze began to lie down, curling up on the grass by the pond as though it were a mattress.

Herman cocked his head at the odd display. That couldn’t be good. “Blaze?” He shook the other man, who responded with a groan as he curled into yet a smaller ball.

A snap from twenty degrees left, at the treeline, filled him with adrenaline. It could be those deer, but something subconscious, perhaps drilled messages from training, told Herman to be wary. “Blaze, get up now.” He shook the other man again, harshly. This time the magician did not respond, and his breathing sounded slow and even. Asleep or unconscious?

A soft rustling confirmed Herman’s fears. Either an enemy or a predator. A click, like an old-fashioned gun cocking, set every sense on edge.

He had no intention of leaving Blaze here in the open like this. If the man couldn’t bring himself to get back to the king’s forces, then Herman would take him back to the lieutenant. Perhaps they could even help him, if they got the medic back.

Turning his back on the treeline, Herman knelt by Blaze and lifted him with ease, calculating the effect of the added weight. With Blaze over one shoulder and his case in one hand, he could return to his camp in a mere day if he ran as fast as he could.

He never got the chance. A soft pelting noise caught his attention from the trees, and he turned in time for the bullet to catch the metal casing enclosing his knee joint, burying itself in between the metal plates. The blow caused no pain, but his leg failed to straighten. Off balance, he fell backward next to the pond, dropping Blaze with an unpleasant thud. Bullets. These are not cyborgs.

He assessed the situation calmly, his training and conditioning winning out over the nauseous dread that rose in his gut when he thought about the hopelessness of his situation. He tried to straighten his leg and was rewarded with a grinding noise as the metal scraped the lead. A dull ache warned him against him trying it again. If he could get to his case, the repair would be simple. But what of Blaze? If these were his people, they should want to help him, but—

A voice called from the clearing. “You are surrounded. Do not move.” 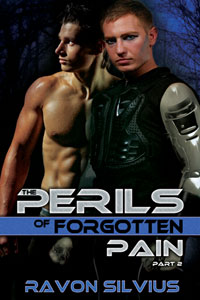 The Perils of Forgotten Pain 2
Ravon Silvius
In Shelf
$4.99