The Search is Over (MF)

Home after a bitter divorce, Rafe seeks to find the man he’s become. In a quiet trailer park on the outskirts of town, a young woman captures his attention. Trouble is, she’s taken, but when they meet, all bets are off. The so-called boyfriend is out of the picture, clearing Rafe's path to her.

Candi Patterson shares living expenses with her coworker and her boyfriend. Working nights as a bartender and going to school during the day is hard on a girl’s social life. Feeling lonely, Candi agrees to date her roommate’s son only to be told later that he is moving back north. Devastated, she comes to the reality that love stinks. It gets in the way of her goals, and she has too much going on to complicate things with dating.

In a chance meeting, Candi meets someone who makes her reconsider that earlier decision.

The Search is Over (MF)

5 HEARTS: "Rafe Gas moved back to his old town after a troublesome divorce from his ex. He's now roommates with his old friend by a trailer park where he sees the most beautiful girl he has ever seen. But he soon learns that she already has a boyfreind and he's not a poacher. Candi is living with her old boyfriend and two other roommates when she meets Rafe. But how can she convince him that they are meant to be together? And if they are both honest and willing to work on this relationship, maybe this can work. Otherwise, they are never going to have a chance together. This is one of the most intensely compelling and emotionally driven stories I have ever had the pleasure to read. Not only has the author crafted a very unique and unusual world, she has taken it one step further with her equally impressive ability to draw the reader into the very heart and soul of the story. Definitely a must-read for anyone that desires a story line that is not predictable and is full of twists that leaves you wanting more. This is the third book I have read by this author and I really like what she writes and really recommend her because she writes about every day lives. You feel what they are feeling and can relate to that. I'm absolutely going to read more books from her." -- Camilla, The Romance Studio

Rafe watched her play with the buttons on his shirt. He leaned back against the sofa. She followed him as she kissed his bared chest, his nipples responding to her touch, much as hers did to his. His taut pecs flexed under her lips as they skimmed over the warmed skin. Her tongue traced the bared skin of his abdomen and his erection grew a little harder. His muscles rippled in response to her tender ministration.

She pulled his shirttail from his jeans, and hungry eyes captured his. She unfastened the buckle of his belt and unbuttoned his pants. She looked down at the opened material. “I wondered if your body hair was blond.”

She fingered the exposed, narrowing trail of fine, cotton-colored body hair that hid behind the fabric of his briefs. Her slow exploration of the stretchy material of elastic drove him crazy, but he lay before her stone still. He didn’t press her or rush her. He let her discover his body at leisure. Her long finger smoothed away the waistband.

Unable to keep his hands to himself, Rafe let them roam over her back, following the curve of her body. The tab of her zipper poked his hand. Not one to question fate, Rafe easily slid the zipper down her back. His finger hooked under the strap of her dress. He slipped it past her shoulder and followed it with heated kisses. The golden glow of her sun-kissed skin enticed him. The shadows played in the curves of her collarbone. He moved the bodice down past her elbows, folding it at her waist. He sucked in air that caught in his chest at her beautiful body. Not even his fantasies were this good.

The flimsy, sheer material of the black, lacy bra barely covered her skin. Rafe’s fingers played at the straps. He rolled her onto her back so he could look down at her beauty. Her arms framed her breasts, positioning them more fully for his view and pleasure. “I like this position.” He softly nipped her breast through the lacy bra. His large hands replaced his heated breath on the sheer material. He massaged her breasts. She inhaled sharply. His eyes watched her face as he skimmed a thumb over her right nipple. It instantly puckered to another level of hardness. Rolling her nipple between his thumb and forefinger kept it aroused by his touch. His tongue lapped at the valley between her breasts. Softly, he pinched her material-clad nipple. A whimper escaped her throat. She grabbed the fold of her dress as Rafe’s thumb gently stroked the depths of her cleavage. He eased the straps of her bra down past her elbows with the rest of her dress. He sucked her right nipple into his mouth and then pinched her left one. He then traded the favors to each one and gave full attention to the detail.

Candi arched her breasts to him. “Rafe.”

She thought she would feel embarrassed by her naked breasts in front of him, but instead, she was curious. The long and short suckles Rafe tendered to her breast, along with the pinches on her right one, sent her over into a tidal wave of desire. How did he take me so quickly to that level?

Rafe wouldn’t let up on his foreplay. As he teased her left breast with his tongue and teeth, he eased his right hand under her dress. His fingers went inside her panties. She could feel the back of his finger touch her throbbing clit. “Ohhh.” Her eyes widened at the simple touch. Rafe applied more soft pressure. She ground herself into his hand.

Candi’s excitement peaked by his whispered encouragement. She reapplied the pressure even more. He backed her off his hand for a second. Easing the straps to her thong panties down to her upper thigh, and then gathered her skirt up to her hands. “Hold this.” Candi complied. She lay before him bare breasted, her womanhood exposed to his touch. Softly, she licked her upper lip in anticipation. She could taste the salt of his skin on it. He used his thumb and forefinger to open her feminine flesh. His middle finger circled the entrance, and then sunk inside her.

She ground herself onto his finger. She heard him moan. Or, was it she?

“Mmm, you’re so wet.” He withdrew his finger and wet her with her own creamy juices. He licked his finger for a quick taste. “That’s sweet.” His thumb rotated the sensitive bud of her clit, his finger delving repeatedly in and out of her. Each time the grinding of her hips met his penetrating finger. He took her right nipple into his hot mouth. She hissed. Her nipples and breast tingled. Thousands of sharp needles assaulted her with a pleasure-pain tingling. She almost screamed with delight at the intense pressure his suckling created. The increased pace of his finger, fucking her to orgasm. Her muscles contracted with each stroke across her clit. She screamed his name just before she soaked his hand with her creamy release. The waves of her orgasm racked her body in soft ripples of ecstasy. She felt the dewiness at the lips of her vagina. Opening her eyes, his penis peeked out at her from behind his zipper. Her eyes opened wider at the thickness and length of his fully aroused staff. It almost touches his navel.

“Rafe,” she whispered in his ear. “I want you.” Her hands wrapped around his engorged bulge, holding and fondling him with an almost animal magnetism.

She felt the soft material of her dress release its hug on her body as Rafe gently slipped it down to her ankles. The coolness of the air conditioner mixed with the heat of her desire made her body shake in rapture.

The whispered consolation was all he gave her in that moment. Standing before him naked for the first time, Candi felt shy and uncertain. What does he think of my body? She dared to look into his eyes. His smile of appreciation gentled her fears.

“I couldn’t have dreamt of a better body.”

His declaration made her feel beautiful

“Let me get a blanket.” He took the blanket from the sofa and laid out a pallet for her to lie on. Tenderly he guided her to the floor.

Candi watched him slowly peel away his shirt. His bared arms bulged with muscles. His hard body was perfect. Candi’s mouth watered at the sight of him, and she began to stroke herself. He shed his jeans, and his bulging member sprang out at her.

The confident grin and bobbing eyebrows challenged her to respond. “Is there anything else you would like to show me?”

“I can think of a few things.” 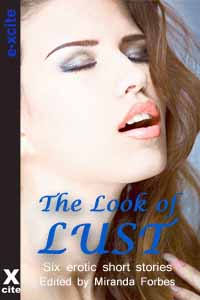 The Look of Lust
Miranda Forbes
In Shelf
$4.59